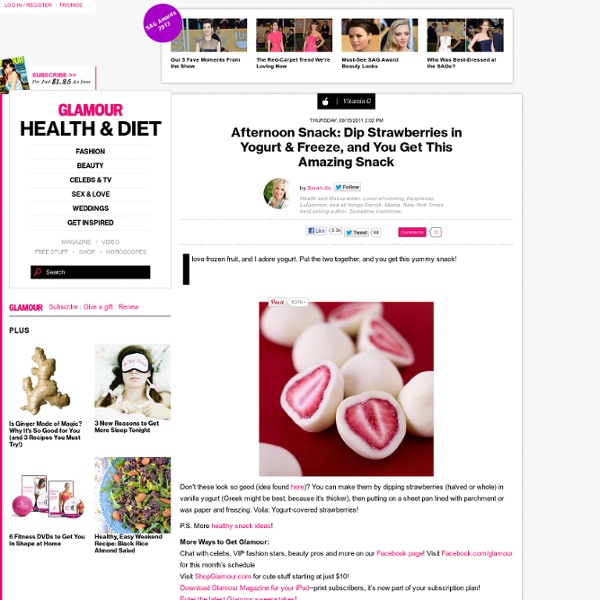 Thursday, 9/15/2011 at 2:02PM by Sarah Jio Health and fitness writer. Lover of running, Nespresso, Lululemon, and all things French. I love frozen fruit, and I adore yogurt. Don't these look so good (idea found here)? P.S. More Ways to Get Glamour: Chat with celebs, VIP fashion stars, beauty pros and more on our Facebook page! Photo: Via We Heart It

Baked Zucchini Sticks and Sweet Onion Dip: that bloomin’ zucchini! Today, class, it being late July and all, we’re going to examine our zucchini facts: •Zucchini is always at the end of any A-to-Z food list; •Zucchini and fruitcake are the undeserving targets of many a joke; •The zucchini plant literally grows like a weed, making it absolutely ubiquitous in vegetable gardens across America; •And for that reason, enterprising cooks have discovered ways to turn it into muffins, and cake, and pancakes, and… Baked Zucchini Sticks. You know that onion appetizer that came into bloom back in the late ’80s? Outback Steakhouse claims it invented the “Bloomin’ Onion” back in 1988, and it wasn’t long before quasi-fast food restaurants adopted it as the hottest appetizer since artichoke dip baked in a bread bowl. These zucchini sticks, with their melty-soft interior and crisp crust, are reminiscent of those onions – and equally addictive, especially when served with their special onion-mustard dip. Ready to go beyond muffins, bread, kebabs, and frittata? Warning!

Recipes Under 400 • Egg and Spinach Quiche Cups 10  ounces frozen... Cowboy Sushi I know that foods differ by region, ethnicity and family. This is one of those dishes that seem to be a regional favorite and family specific. This little delight is something I was introduced to the first time I went to a family reunion for The Good Husband. If you can't tell what it is, it is cream cheese, Budding Beef and pickles. My family served something similar but our version was cream cheese, salami and green onion. This is a popular appetizer 'round our family and I have seen uncles fight over the last pickle. This is a relatively new dish to me and no one seemed to have a name for it. I give you: Cowboy Sushi! Ingredients: 6 large whole kosher dill pickles 3 packages Buddig Beef 1 package (8 oz) cream cheese, softened Directions: ~Spread a thin layer of cream cheese over one slice of beef. ~Roll the two slices of beef around one whole pickle. ~Repeat steps one and two so that the pickle ends up with four layers of beef and cream cheese. recipe by: The Good Wife

Baked Apple Chips I am totally guilty of snooping in other peoples carts at the grocery store. I want to know what other people are getting. What if I'm missing out on something! Saturday (after my super muddy FUN mud run and 5 showers later) we went to the grocery store and the lady in line ahead of us had a bag of baked apple chips in her cart. YUMMMers. I thought these would probably not be that complicated to make myself...I also figured they would taste better warm and fresh out of the oven. What you will need:2 applesCinnamonDirections:Remove apple core. * UPDATE: Check on them at the hour mark and every 30 minutes after that. These were SO good!! Cucumber Feta Rolls | Easy Holiday Appetizer Cucumber Feta Rolls [Holiday Recipe Exchange] Appetizers and Snacks, Holiday Recipes, Recipe Exchange | 40 comments I don’t know about the rest of you, but I really feel like the Thanksgiving and Christmas holiday season snuck up on me this year. Maybe because my kids are getting older, which means more to do, and there was a bit of traveling during November to keep us on our toes. I’m all about keeping things simple this year. I’ve never had or made Cucumber Rolls before making this recipe, but I loved the flavors of feta with kalamata olives and sundried tomatoes inside refreshing cucumbers. What do you do to keep things simple during this time of year? Join Jamie and me this week in sharing your recipes for your Favorite Holiday Entertaining Recipes for a chance to win a great Mandoline Slicer from Edgeware. Edgeware has a great selection of sharp kitchen tools, like Madoline slicers, graters and zesters, sharpening rods and stones, electric and manual knife sharpeners.

Minimally Invasive » Yep, More Chicken Hi, it’s me, your favorite disappearing blogger! I’ve been tied up with work and taking care of the doggies while Gil‘s away this week, but I didn’t want to let too much time pass before posting about this heavenly dish – skillet rosemary chicken. I still haven’t quite figured out what makes it so wonderful because there’s nothing out of the ordinary about it. I mean, combining chicken with lemon, potatoes, garlic & rosemary… ROSEMARY! But really, there’s just something about it that knocked my socks off. It’s probably the copious chicken fat the potatoes and mushrooms roast in, now that I think about it. recipe after the jump Skillet Rosemary Chicken lightly adapted from Food Network If I plan ahead next time, I’ll probably marinate the chicken for a couple of hours before continuing with the recipe. Preheat the oven to 450. Pile the rosemary leaves, garlic, 2 teaspoons salt and the red pepper flakes on a cutting board, then mince and mash into a paste using a large knife.

Clean Eating Zucchini Chips | The Joy of Clean Eating Both of my kids are fruit lovers. Getting them to eat their veggies can be a struggle. So I wasn’t holding out much hope when I gave them some “superhero and princess chips” that would give them special powers! They ate them all up! The hardest part was sharing – not them, ME! ~Sarah Ingredients: 1/4 cup Homemade Breadcrumbs1/4 cup grated Parmesan cheese (optional)1/8 tsp black pepperheaping 1/2 cup whole wheat flour1 cup cold milk (I used oat milk)1 tsp apple cider vinegar2 1/2 cups sliced zucchini (about 2 small zucchinis cut about 1/4 inch thick) Preparation: Preheat oven to 425 degrees. Nutritional Info: Makes 2 servings. Nutrients per serving: Calories: 224.5, Cal. from Fat: 33.5, Total Fat: 3.5g, Sat. Notes: These chips are best eaten right out of the oven.

Fruit Salsa with Baked Cinnamon Chips There are so many things I love about Disney World. The highlight for me is always at night on Main Street watching the fireworks and eating Apple Pie Caramel apples. We bought not ONE but TWO of them, at $8.95 a pop, just to make sure they tasted like the ones I make…and they do. Here’s a refreshing fruit salsa that is perfect for BBQs, baby showers…you name it. I brought this to my friend’s baby shower and the hostess of the shower had made the exact same thing. I opted to only put 1 Tablespoon of white sugar and leave out the brown sugar since my fruit was pretty sweet already. Fruit Salsa with Baked Cinnamon Chips Ingredients Cinnamon sugar: 1 cup white sugar 2 Tablespoons cinnamon Instructions In a large bowl, thoroughly mix kiwis, apples, raspberries, strawberries, white sugar, brown sugar and fruit preserves. Notes

Crock-Pot Baked Apples | Skinny Chef This was an old stand-by in our family home on icy Pittsburgh winter nights when cold weather kept us indoors. This fruit based dessert has the same flavors as apple pie without the guilt of a fattening crust, clocking in at around 200 calories a piece! It’s easily one of the most popular recipes on SkinnyChef.com, and many folks had similar things to say like Kari: “My oh my this is so easy! “They love cooking with me. Like the crockpot baked apples recipe on this page? Makes 6 baked apples Ingredients 1/4 cup brown sugar 1/4 cup walnuts, chopped 2 tablespoons trans-fat free margarine or butter 1 teaspoon cinnamon 6 Gala or Macintosh apples, cored 1/2 cup apple juice or apple cider 2 tablespoons orange liquor (optional) Instructions In a large bowl, mix brown sugar, walnuts, margarine or butter, and cinnamon. Nutritional Stats Per Serving (1 apple): 214 calories, 1 g protein, 34g carbohydrates, 7 g fat (1 g saturated), 0 mg cholesterol, 2g fiber, 50 mg sodium. Weight Watchers® Points Plus: 5

Recipe for Roasted Cabbage with Lemon (For Phase One Fridays I highlight Phase One recipes from the past that have been my personal favorites. This Roasted Cabbage with Lemon was first posted in March 2010, and I've made it many, many times since then.) My friend Robin lives about 45 minutes away from Salt Lake, so sometimes when she has an early morning meeting she stays at my house. Last Friday was one of those nights, and since Robin loves cabbage I knew it would be a perfect time to test this recipe. Robin and I loved this roasted cabbage so much I made it again the very next day to take photos for the blog. Start preheating oven, then cut one head of cabbage into 8 wedges, cutting through the core. Carefully trim the strip of core on the edge of each cabbage wedge and lay cabbage wedges on a baking sheet so they aren't crowded. Whisk together the olive oil and lemon juice. Roast cabbage 15 minutes, or until the side touching the pan is nicely browned, then turn each piece carefully. Instructions: Printer Friendly Recipe