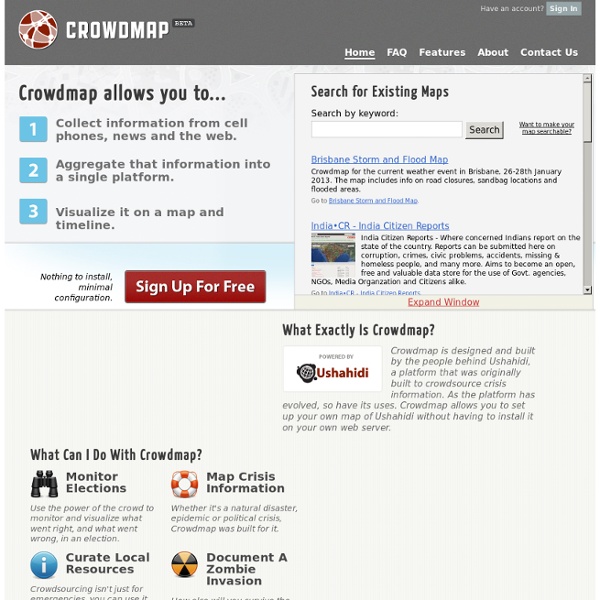 What Exactly Is Crowdmap? Crowdmap is designed and built by the people behind Ushahidi, a platform that was originally built to crowdsource crisis information. As the platform has evolved, so have its uses. What Can I Do With Crowdmap? Monitor Elections Use the power of the crowd to monitor and visualize what went right, and what went wrong, in an election.

Ushahidi Course Materials - Crisis Mapping, Politics & New Media Dear community, I am developing a new course: Political Science 397: Crisis Mapping, Politics & New Media. As the course progresses I will post materials here for your review. Please feel free to use any portion of the materials posted here for your own course development. Follow us on twitter: #CMClass New Resources for the Fall 2011 Course: Grassroots mapping using kites and balloons on JCU’s campus Links to material from my Spring 2011 course: Information for instructors: visualization and analysis: Past Activities Open Street Maps Exercise What can we learn about maps & difficulties of making space/time maps from mapping our daily routine? Thanks for any input or comments! If you want to build a ship, don’t drum up people together to collect wood & assign them tasks & work, rather, teach them to long for the endless immensity of the sea. ~ Antoine de Saint-Exupéry ~ HT: @PatrickMeier Many thanks to the Department of Political Science at JCU for your encouragement, and your coffee.

Crisis Commons Global mapping of technology for transparency and accountability | Transparency & Accountability Initiative As internet and mobile phone use increases, technology is transforming the field of transparency and accountability making it an increasingly dynamic space across the globe. Technology is helping to improve citizen participation in decision-making and producing new ways of identifying public service challenges through processes such as ‘data mashing’. This paper documents current trends in the way technology is being used to promote transparency in different parts of the world. It reviews over 100 projects from across Africa, Asia, Europe and Latin America, examining how new technologies are re-energising traditional methods. In particular, it focuses on how these new technologies are helping to engage different actors from citizens, media, authorities and the private sector. Our research finds promising success stories alongside less accomplished examples. The paper includes a summary of the key findings and recommendations for further research in key areas of this field.

Crisis Mappers Net Flowr. Real-time Collaboration, knowledge exchange and smart information flow. #Ambon: Conflict and Containment Through Virtual Networks Image Courtesy of the Author The story that follows is the subject of an ongoing investigation by the Indonesian National Human Rights Commission (Komnas HAM), whose working conclusion is that the riots that occurred on September 11th and 12th, 2011, taking seven lives and causing 65 injuries on the small island of Ambon, Indonesia, may have been intentionally provoked by certain parties through text message rumors. Despite a slow and ineffective response by police on the ground, the violence did not engulf the entire island. Some say that the riots were contained by efforts in the same vessel through which they were spread: text messages and virtual social networks. Early last month, in the middle of a small city on Ambon, one of Indonesia’s Maluku Islands, a Muslim ojek (motorcycle taxi) driver was found covered in blood in a gutter in a Christian part of town, where Muslims don’t often go. Motorcycle deaths are not uncommon in Indonesia. The Peace Provocateurs were not alone.