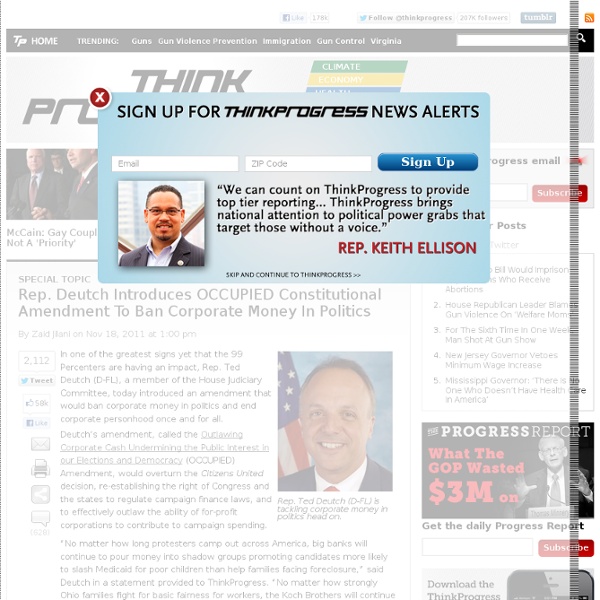 By Zaid Jilani on November 18, 2011 at 1:00 pm "Rep. Deutch Introduces OCCUPIED Constitutional Amendment To Ban Corporate Money In Politics" Rep. Ted Deutch (D-FL) is tackling corporate money in politics head on. In one of the greatest signs yet that the 99 Percenters are having an impact, Rep. Deutch’s amendment, called the Outlawing Corporate Cash Undermining the Public Interest in our Elections and Democracy (OCCUPIED) Amendment, would overturn the Citizens United decision, re-establishing the right of Congress and the states to regulate campaign finance laws, and to effectively outlaw the ability of for-profit corporations to contribute to campaign spending. “No matter how long protesters camp out across America, big banks will continue to pour money into shadow groups promoting candidates more likely to slash Medicaid for poor children than help families facing foreclosure,” said Deutch in a statement provided to ThinkProgress.

Did you know San Diego's name? Updated May 13, 2003 Most people who have some knowledge of San Diego's history will generally acknowledge that Juan Rodriguez Cabrillo was the first European to set foot on San Diego soil in 1542, when he discovered what is now San Diego Bay. And many will generally assume it was Cabrillo who named this new territory "San Diego." If not Cabrillo, then many might think that it was the famous Franciscan friar, Junipero Serra, who named the colony San Diego when he established the first of California's Franciscan missions in 1769. If you thought it was either or Cabrillo or Serra, you would be wrong. In fact, this newly discovered area (well, new to Europeans...Native Americans had been here all along) was named by another Spanish explorer who came along some 60 years after Carbillo. According to the San Diego Historical Society, Sebastian Vizcaino arrived in San Diego in November 1602 after sailing from Acapulco the previous May. And the name stuck ever since.

France gets sucked in to the debt crisis. Here’s why. Please support our site by enabling javascript to view ads. LONDON, UK — In Europe’s sovereign debt crisis, the powers that be are playing yet another round of the ratings game. This time the action is in France. The country's AAA bond rating — a key pillar for Europe’s bailout — is being loudly questioned. It's a bad time for France to be "it" in the ratings game. Meanwhile, French bond yields are going up, as the markets seem to be lining the country up for a sustained attack. Eurofight: France and Germany bicker over bailout This does not come as a surprise to France's political leaders. The French themselves don't seem bothered, according to Paris-based political commentator Agnes Poirier. The latest round of the ratings game began a week ago, with the ineptitude of one agency, Standard & Poor's. Then on Tuesday this week, the Lisbon Council, a Brussels-based think tank, issued a comparative study of all the euro zone countries' economic "health."

History of San Diego The recorded history of the San Diego, California, region begins with the first landing by a European in the present state of California and the first European settlement in California, so that San Diego has been described as "the birthplace of California."[1] Native Americans such as the Kumeyaay people had been living in the area for as long as 12,000 years. San Diego became part of the U.S. in 1848, and the town was named the county seat of San Diego County when California was granted statehood in 1850. Pre-colonial and colonial period[edit] Cabrillo National Monument, San Diego The area has long been inhabited by the Kumeyaay Native American people. The bay and the area of present-day San Diego were given their current name sixty years later by Sebastián Vizcaíno when he was mapping the coastline of Alta California for Spain in 1602.[2] Vizcaino was a merchant who hoped to establish prosperous colonies. The Ship! Mexican period[edit] An American town[edit] ”Why did I come to San Diego?

Girls in Tech Launches in London & Names Top 100 Women in Tech Europe The international network that seeks to promote and empower women in tech and entrepreneurship, Girls in Tech, has just announced that it will be launching in London in June. The Next Women will be their media partner. Founded in 2007 in San Francisco by Adriana Gascoigne, the network counts numerous chapters around the globe – in China, France, Greece, Singapore, Taiwan, the US and more – and over 8,500 members worldwide. Girls in Tech UK seeks to empower women in technology by simply providing them with more visibility through hosting mini tech conferences and meet-ups where a majority of the speakers – unlike other tech conferences – are women. Sponsored by Google and Criteo, and with The NextWomen as media partner, the London launch of Girls in Tech will take place on June 1st at Google Campus with speakers from companies and organisations including : At the event, Girls in Tech London will be announcing the Top 100 Women in Tech in Europe.

Mission San Diego de Alcala San Diego de Alcala ~ San Luis Rey ~ Pala ~ Santa Ysabel ~ Las Flores Mission San Diego de Alcala has been called affectionately the "mother" of the other California establishments of the Franciscans. She was rather their elder sister. Late afternoon of July 14th and all of the 15th were consumed in bringing order into camp after the departure of men and animals. Who were these men at San Diego, living and dead? With Portola gone, Fr. Many San Diegans remember late ruins of that Presidio chapel which stood very close to the site of the first mission building, which was described as facing the bay, its door (a piece of cloth) invitingly left open so that neighboring Indians might enter, perhaps, and receive a welcome to godliness and civilized living. The morning of July 16, the "Feast of the Triumph of the Cross," a tall roughly constructed cross was planted. In 1774 the mission was moved about six miles inland to Nipaguay in the Valle del Rio San Diego. Several savages and Fr. Fr.

Multiculturalism in Europe After the rise of multicultural policies in the 1980s and 1990s, the winds have shifted in Europe. Terrorist attacks in Madrid, London, Norway, and, most recently, in Toulouse, have furthered the securitization of Islam across Europe, while increasing immigration (predominantly from Muslim countries) has caused societal tensions. As a result, existing ideas concerning multiculturalism, religious pluralism, and national authenticity are being challenged. Past policies of cordon sanitaire are no longer in full effect, as mainstream political parties have come to adopt some of the ideas of their populist and right-wing peers; witness former president Nicolas Sarkozy’s campaign rhetoric against immigration and Muslims following the strong showing by right-wing candidate Marine Le Pen. Sindre Bangstad, Post-Doctoral Fellow, Department of Social Anthropology, University of Oslo Back to top Keith Banting, adopting a strong emphasis on civic integration. Elizabeth H.

Obama’s Cost-Benefit Executive Order Last week, President Obama issued a new executive order on cost-benefit analysis The order also promised a retrospective review of old rules to weed out the duds. Business interests were pleased, environmentalists were dismayed. Politically, the new executive order makes perfect sense. What about the substance of the order? The more significant part of the order relates to future rulemakings. In short, the Executive Order is another indication, along with recent personnel changes, that the next four years might look like a third Clinton term.

Brussels Airlines Introduces Flights from the U.S. to Europe Brussels Airlines Introduces Flights from the U.S. to Europe Beginning this month, Brussels Airlines is running nonstop flights between Brussels and New York's John F. Kennedy International Airport. These aren't the only nonstops on the route; both American and Delta also fly nonstop from New York to Brussels. Advertisement At this point, Brussels does not seem to be pushing any special introductory fares. Brussels quotes a fare of $949 round-trip, exactly matched by competitive nonstops on American and Delta. Brussels Airlines gushes about its new lie-flat business-class seats and deluxe cabin service. Brussels is a member of the Star Alliance, which features through-ticketing options from lots of North American cities on Air Canada, United, and US Airways to a long list of European and Asian destinations. All in all, Brussels Airlines looks like a good—although not overpowering—choice for flying nonstop between New York and Brussels. You Might Also Like:

Immanuel Kant So act that your principle of action might safely be made a law for the whole world. Immanuel Kant (22 April 1724 – 12 February 1804), born Emanuel Kant, was a German philosopher. Quotes[edit] Freedom is the alone unoriginated birthright of man, and belongs to him by force of his humanity. The wish to talk to God is absurd. Religion is too important a matter to its devotees to be a subject of ridicule. Men will not understand … that when they fulfil their duties to men, they fulfil thereby God's commandments... Apart from moral conduct, all that man thinks himself able to do in order to become acceptable to God is mere superstition and religious folly. By a lie a man throws away and, as it were, annihilates his dignity as a man. The wish to talk to God is absurd. [edit] I freely admit that the remembrance of David Hume was the very thing that many years ago first interrupted my dogmatic slumber and gave a completely different direction to my researches in the field of speculative philosophy.

Local Elections:California Primary,General Elections.2011-2012 Voting Dates and Deadlines In California, the deadline to register to vote for an election is 15 days before each local and statewide Election Day, so please register early! As a California voter, you should be aware that in some areas, local elections are held on dates that do not coincide with statewide election dates. The 15-day close of registration deadline for these local elections varies depending on the actual date of the election. To register to vote in the State of California, an individual must meet the following qualifications: You need to re-register to vote when: You move to a new permanent residence,You change your name, orYou change your political party choice. How to register to vote You can also pick up a paper voter registration application at your county elections office, library, Department of Motor Vehicles offices, or U.S. post office. Click here to register to vote Election Offices In california Browse 2011 Census Data By County: