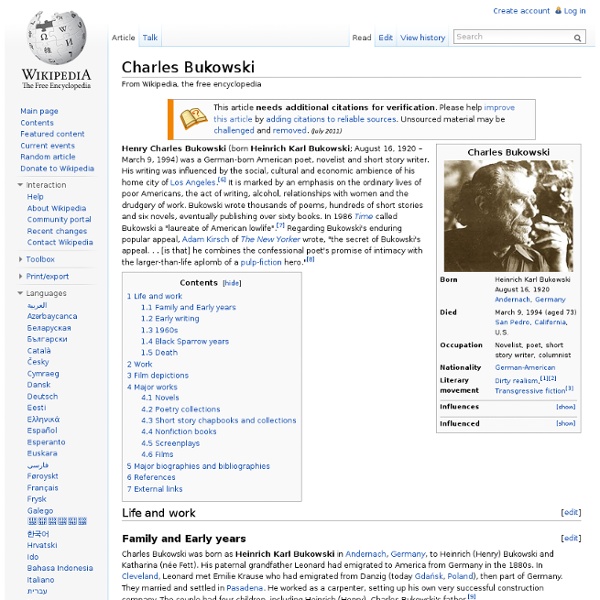 Life and work[edit] Family and early years[edit] Charles Bukowski was born as Heinrich Karl Bukowski in Andernach, Germany, to Heinrich (Henry) Bukowski and Katharina (née Fett). His paternal grandfather Leonard had emigrated to America from Germany in the 1880s. In Cleveland, Leonard met Emilie Krause, who had emigrated from Danzig, Germany (today Gdańsk, northern Poland). Charles Bukowski's parents met in Andernach in western Germany following World War I. The family settled in South Central Los Angeles in 1930, the city where Charles Bukowski's father and grandfather had previously worked and lived.[8][10] In the '30s the poet's father was often unemployed. In his early teens, Bukowski had an epiphany when he was introduced to alcohol by his loyal friend William "Baldy" Mullinax, depicted as "Eli LaCrosse" in Ham on Rye, son of an alcoholic surgeon. Early writing[edit] In 1955 he was treated for a near-fatal bleeding ulcer. 1960s[edit] Black Sparrow years[edit] Charles Bukowski in 1990

Women (novel) Women focuses on the many dissatisfactions Chinaski faced with each new woman he encountered. One of the women featured in the book is a character named Lydia Vance; she is based on Bukowski's one-time girlfriend, the sculptress and sometime poet Linda King. Another central female character in the book is named "Tanya" who is described as a 'tiny girl-child' and Chinaski's pen-pal. In the book, Chinaski's nickname is Hank, which was one of Bukowski's nicknames. Bukowski himself drew the picture of the girl on the cover of the book. The book was simultaneously published in Australia by Wild and Woolley, who bought a chunk of the first Black Sparrow Press print run. When asked his favorite author, Chinaski responds, "Fante." Women Quotes

Marquis de Sade Life[edit] Early life and education[edit] The Marquis de Sade was born in the Hôtel de Condé, Paris, to Jean Baptiste François Joseph, Count de Sade and Marie Eléonore de Maillé de Carman, cousin and Lady-in-waiting to the Princess of Condé. He was educated by an uncle, the Abbé de Sade. Later, he attended a Jesuit lycée, then pursued a military career, becoming Colonel of a Dragoon regiment, and fighting in the Seven Years' War. Sade's father, Jean-Baptiste François Joseph de Sade. Title and heirs[edit] The men of the Sade family alternated between using the marquis and comte (count) titles. For many years, Sade's descendants regarded his life and work as a scandal to be suppressed. Scandals and imprisonment[edit] Sade lived a scandalous libertine existence and repeatedly procured young prostitutes as well as employees of both sexes in his castle in Lacoste. Beginning in 1763, Sade lived mainly in or near Paris. He had been working on his magnum opus Les 120 Journées de Sodome.

J. D. Salinger Jerome David Salinger (/ˈsælɪndʒər/; January 1, 1919 – January 27, 2010) was an American writer who won acclaim early in life. He led a very private life for more than a half-century. He published his final original work in 1965 and gave his last interview in 1980. Early life and experiences[edit] Jerome David Salinger was born in New York City, on New Year's Day, 1919. 1133 Park Avenue Salinger had trouble fitting in at his new school and took measures to conform, such as calling himself Jerry.[16] (His family called him Sonny.[17]) His parents then enrolled him at Valley Forge Military Academy in Wayne, Pennsylvania.[10] Though he had written for the school newspaper at McBurney, Salinger began writing stories "under the covers [at night], with the aid of a flashlight".[18] Salinger was the literary editor of the class yearbook, Cross Sabres. Salinger started his freshman year at New York University in 1936. World War II[edit] Post-war years[edit] The Catcher in the Rye[edit]

Alan Turing Alan Mathison Turing, OBE, FRS (/ˈtjʊərɪŋ/ TEWR-ing; 23 June 1912 – 7 June 1954) was a British mathematician, logician, cryptanalyst, philosopher, pioneering computer scientist, mathematical biologist, and marathon and ultra distance runner. He was highly influential in the development of computer science, providing a formalisation of the concepts of "algorithm" and "computation" with the Turing machine, which can be considered a model of a general purpose computer.[2][3][4] Turing is widely considered to be the father of theoretical computer science and artificial intelligence.[5] During World War II, Turing worked for the Government Code and Cypher School (GC&CS) at Bletchley Park, Britain's codebreaking centre. For a time he led Hut 8, the section responsible for German naval cryptanalysis. After the war, he worked at the National Physical Laboratory, where he designed the ACE, among the first designs for a stored-program computer. Early life and career[edit] Cryptanalysis[edit]

The Catcher in the Rye The Catcher in the Rye is a 1951 novel by J. D. Salinger.[3] Originally published for adults, it has since become popular with adolescent readers for its themes of teenage angst and alienation.[4][5] It has been translated into almost all of the world's major languages.[6] Around 250,000 copies are sold each year with total sales of more than 65 million books.[7] The novel's protagonist, Holden Caulfield, has become an icon for teenage rebellion.[8] Plot summary[edit] Holden begins his story at Pencey Prep, an exclusive private school in (fictional) Agerstown, Pennsylvania, on the Saturday afternoon of the traditional football game with rival school Saxon Hall. Holden misses the game. Holden returns to his dorm, which is quiet because most of the students are still at the football game. He checks into the dilapidated Edmont Hotel. After a short sleep, Holden telephones Sally Hayes, a familiar date, and they agree to meet that afternoon to attend a play. History[edit] Writing style[edit]

Jack Kerouac Jean-Louis "Jack" Kérouac (/ˈkɛruːæk/ or /ˈkɛrɵæk/; March 12, 1922 – October 21, 1969) was an American novelist and poet. He is considered a literary iconoclast and, alongside William S. Burroughs and Allen Ginsberg, a pioneer of the Beat Generation.[2] Kerouac is recognized for his method of spontaneous prose. Thematically, his work covers topics such as Catholic spirituality, jazz, promiscuity, Buddhism, drugs, poverty, and travel. He became an underground celebrity and, with other beats, a progenitor of the hippie movement, although he remained antagonistic toward some of its politically radical elements.[3][4] Biography[edit] Early life and adolescence[edit] Jack Kerouac was born on 9 Lupine Road in the West Centralville section of Lowell Massachusetts, 2nd floor. Jack Kerouac was born in Lowell, Massachusetts, to French-Canadian parents, Léo-Alcide Kéroack and Gabrielle-Ange Lévesque, of St-Hubert-de-Rivière-du-Loup in the province of Quebec, Canada. Early adulthood[edit]

Tracy Hall Howard Tracy Hall (October 20, 1919 – July 25, 2008) was an American physical chemist, and the first person who grew a synthetic diamond according to a reproducible, verifiable and witnessed process, using a press of his own design. Early life[edit] Tracy Hall was born in Ogden, Utah in 1919. His full name was Howard Tracy Hall, but he often used the name H. The invention[edit] As with many important inventions, the circumstances surrounding Hall's synthesis is the object of some controversy. The composition of the starting material in the sample chamber, catalyst for the reaction, and the required temperature and pressure were little more than guesses. GE went on to make a fortune with Hall's invention. Later years[edit] Hall left GE in 1955 and became a full professor of chemistry and Director of Research at Brigham Young University. On Sunday, July 4, 1976, he became a bishop in the Church of Jesus Christ of Latter-day Saints and served five years. Recognition[edit] Patents[edit] U.S.