How to make Paper Clay 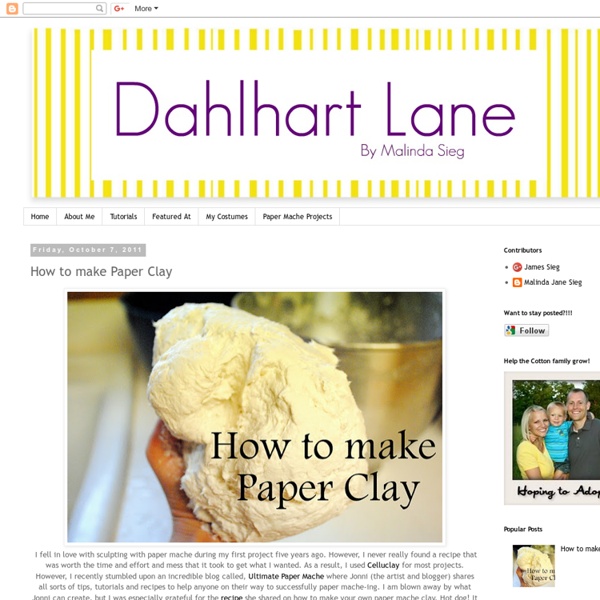 I fell in love with sculpting with paper mache during my first project five years ago. However, I never really found a recipe that was worth the time and effort and mess that it took to get what I wanted. As a result, I used Celluclay for most projects. However, I recently stumbled upon an incredible blog called, Ultimate Paper Mache where Jonni (the artist and blogger) shares all sorts of tips, tutorials and recipes to help anyone on their way to successfully paper mache-ing. I am blown away by what Jonni can create, but I was especially grateful for the recipe she shared on how to make your own paper mache clay. Hot dog! For my purposes, I ended up altering the recipe just slightly so that I could get the thicker consistency that I like. Paper Clay: 2 Cups toilet paper 1 Cup regular joint compound (the premixed kind. 3/4 Cups flour Start off by soaking your toilet paper in water: When it is fully wet, remove cardboard center, squeeze out as much water as you can and break up into chunks.

DIY: Decoupage Don't you guys love Pinterest? That's where I found this idea. Here's a great way to save some money on your craft addictions; make you own Decoupage! And it really works plus it's easy to do. You need.... A jar Elmers Glue Water Empty the glue into a jar. Add Water. Shake shake shake And you are done!! I know it works because i used it to paste this paper label onto the jar :) It could make a great gift for your crafting buddies Do you have QUESTIONS about this? Chalk It Up Chalkboards aren’t just for classrooms. Don’t believe me? Well ladies, be prepared to snag a box of chalk because blackboards have graduated to bigger and chicer things… and they are headed straight for your home! Pretty cool, right? Now, you may be thinking, “I don’t think I want to paint an entire wall of my home like a chalkboard that will remind me of my 2nd grade classroom.” Grocery or shipping lists… A message board… Or, use it to label things! Other ideas for chalk paint: vasestabletops (Could be fun for guests!) The traditional in-store paints only come in classic shades of black or green. Here’s how to make your own chalkboard paint in just 10 simple steps courtesy of the only and only, Martha Stewart… Note: You will probably have to make a trip to your local home improvement store. What you need… flat-finish latex paint in any colorunsanded tile groutpaint stirrerpaint roller or sponge paintbrush150-grit sandpapersponge Instructions (as listed in Martha Stewart Living, January 2007)

Homemade Deodorant, and it works…. This probably comes under the TMI clause, but I’ve had to rotate deodorants since I’ve begun using them. I usually have at least 3 in the rotation, due to what I like to call “fire pits”. For me this is a extreme rash, bumps and sometimes hive like condition, while using deodorants. I’ve used about everything on the market, even stopped shaving my pits, (which I couldn’t stand and really didn’t help). I had a really bad flare up recently, and twice now I’ve come up with big lumps. My first success is the Crystal Rock, The link above will bring you to the website and the “Crystal Story” . While investigating how to make deodorant online I’ve discovered many variations on a basic formula: 1. 2. * absorber: baking soda, cornstarch, arrowroot powder * moisturizer: coconut oil, shea butter, cocoa butter, liquid Vitamin E * disinfectant: coconut oil, tea tree oil, honey, grapefruit seed extract * scent: pretty much any essential oil that you love -coconut oil, tea tree oil, baking soda, cornstarch

Skill Builder: Tabletop Gaming — Modeling Tips and Tricks My Eldar Howling Banshees behind a barricade I made from Stimudents and popsicle sticks In the early aughts, I ran a popular and well-regarded tabletop wargame modeling and converting site called 40K Konversions. It was dedicated to all forms of modeling related to the Warhammer 40,000 universe. For those who don’t know, “conversions” are wargame miniatures that have been altered in some way, from swapping legs or heads to creating whole new figures by parts swapping, sculpting on new features, and so on. Vehicle Parts Use 1/35th scale military models (for close-enough 28mm game model compatibility).Buy old kits at eBay auctions. Cockpit Controls and Industrial Parts Old computers and printers can yield an infinite number of tiny parts and wires for detailing vehicle cockpits, comm centers and for use as building materials. How to scratch-build vehicle safety belts Cloth Seat Covers and Safety Belts Cloth first aid strips make very realistic seat covers and safety belts. Reshaping Hands

Make A Cheap & Easy Solar USB Charger With An Altoids Tin Photos by Joshua Zimmerman The craftster behind the very popular $3 solar-powered emergency radio is back with a new awesome project: a cheap solar battery charger with a USB plug. Zimmerman wrote, saying that he saw a lot of small solar powered chargers being talked about over Earth Day, but there was a big problem: "They're all quite nice, but also quite expensive. I don't think I've seen any for less than $60, and I've not seen one that really suits my style." So, he came up with his own, using one of our favorite reusable items -- the ever wonderful Altoids tin. In looking for the cheapest way to accomplish the task, Zimmerman found that he could build a USB solar charger for under $30 (or $10 if be buys parts in bulk, though it's not likely you'll be buying bulk solar cells and DC-to-USB converter circuits). Zimmerman states, "The central brain of our project is a DC to USB converter circuit.

Hand Papermaking Home Page Dye - Dyes From Plants - Pioneer Thinking Did you know that a great source for natural dyes can be found right in your own back yard! Roots, nuts and flowers are just a few common natural ways to get many colors. Yellow, orange, blue, red, green, brown and grey are available. Go ahead, experiment! Gathering plant material for dyeing: Blossoms should be in full bloom, berries ripe and nuts mature. Remember, never gather more than 2/3 of a stand of anything in the wild when gathering plant stuff for dying. To make the dye solution: Chop plant material into small pieces and place in a pot. Getting the fabric ready for the dye bath: You will have to soak the fabric in a color fixative before the dye process. Color Fixatives: Salt Fixative (for berry dyes) 1/2 cup salt to 8 cups cold water Plant Fixatives (for plant dyes) 4 parts cold water to 1 part vinegar Add fabric to the fixative and simmer for an hour. Dye Bath: Place wet fabric in dye bath. NOTE: It’s best to use an old large pot as your dye vessel. Shades of ORANGE Shades of PINK

punchneedle globe revealed! Ah, this post has been a long time coming… (Previous update posts are here: 1, 2, 3, 4, 5.) I’m not quite sure when I embarked on this project as I didn’t keep any notes; all I know for sure is that my Illustrator design file was last modified in December 2009, so it’s taken over a year to take this project from a 2D pattern to a 3D completed piece. But here, finally, it is: the Punchneedle Embroidery Globe! Click the pic for the larger version: Hey – it’s PlanetJune personified! Maybe this should be my logo Thank you to my orangutan for posing with the globe for these photos Stitching the two halves together was quite a challenge. But finally, it was finished! Asia and Australia, Europe and Africa, N and S America… You can see from the above pictures that my globe isn’t a perfect sphere – it looks slightly narrower in the middle picture than in the 2 outer pics. I’m a geek… I decided to put on my science geek hat and come up with some estimates of how many stitches went into this project.

How-To: Mod a Point-and-Shoot for Infrared Photography Digital camera sensors are typically sensitive to infrared light, but camera manufacturers install a infrared cut-off filter to block these wavelengths. If you have an old Canon point and shoot camera and want to try out infrared photography, Matthew Petroff has posted a guide to modding a Canon PowerShot SD400 for this technique. The process involves carefully disassembling the camera, removing the infrared cut-off filter and installing a visible light cut-off filter, which is simply a piece of fully exposed, developed color negative film. If seeing a camera in pieces makes you wince and you just want to take a look at the resulting photographs, here are a couple before & after shots Matthew took: Matt Richardson Matt Richardson is a Brooklyn-based creative technologist, Contributing Editor at MAKE, and Resident Research Fellow at New York University’s Interactive Telecommunications Program (ITP). mattr@makezine.commattrichardson.com Related