Meat or two veg? Find out your food's climate footprint 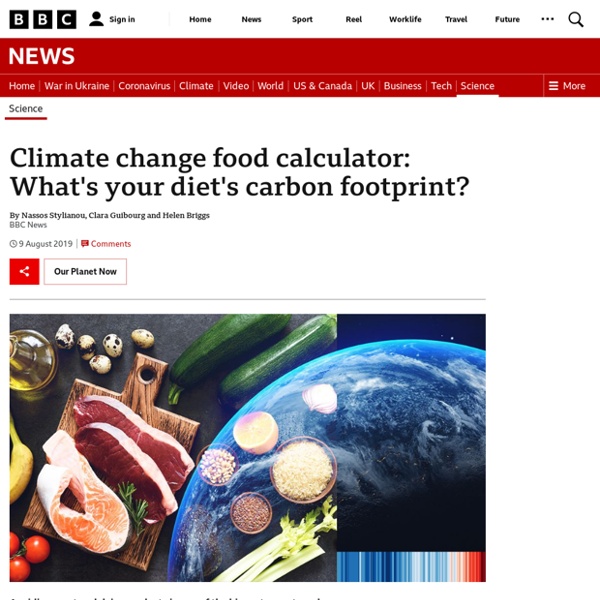 Avoiding meat and dairy products is one of the biggest ways to reduce your environmental impact, according to recent scientific studies. Switching to a plant-based diet can help fight climate change, according to a major report by the UN's Intergovernmental Panel on Climate Change (IPCC), which says the West's high consumption of meat and dairy is fuelling global warming. But what is the difference between beef and chicken? Does a bowl of rice produce more climate warming greenhouse gases than a plate of chips? Is wine more environmentally friendly than beer? To find out the climate impact of what you eat and drink, choose from one of the 34 items in our calculator and pick how often you have it. All figures for each food in the calculator are global averages. Design by Prina Shah, development by Felix Stephenson and Becky Rush. Food production is responsible for a quarter of all greenhouse gas emissions, contributing to global warming, according to a University of Oxford study.

Behind the scenes at a Glasgow recycling centre: What it really means to go green You do your bit. You put everything that can be recycled into the appropriate bin. You know that if it’s plastic, it’ll probably end up being made into a bottle or if it’s an old newspaper and magazine, one day it will be made into new paper. But how does it all happen? What is the recycling process really like? If you live in Glasgow, the chances are your recycling will end up here, at Blochairn Materials Reclamation Facility, just off the M8.

The three-degree world: cities that will be drowned by global warming When UN climate negotiators meet for summit talks this month, there will be a new figure on the table: 3C. Until now, global efforts such as the Paris climate agreement have tried to limit global warming to 2C above pre-industrial levels. However, with latest projections pointing to an increase of 3.2C by 2100, these goals seem to be slipping out of reach.

Here’s How Far the World Is From Meeting Its Climate Goals Two years after countries signed a landmark climate agreement in Paris, the world remains far off course from preventing drastic global warming in the decades ahead. On Monday, the latest round of post-Paris international climate talks begin in Bonn, Germany, to discuss how to step up efforts. Under the Paris deal, each country put forward a proposal to curtail its greenhouse-gas emissions between now and 2030. But no major industrialized country is currently on track to fulfill its pledge, according to new data from the Climate Action Tracker. Not the European Union.

Influenza lineage extinction during the COVID-19 pandemic? The stark reduction in global prevalence of B/Yamagata viruses compared with the other lineages may indicate an inherent vulnerability of this lineage. Indeed, B/Yamagata viruses have a lower effective reproductive number than B/Victoria viruses, and B/Yamagata epidemics have a slower initial growth phase with shorter transmission chains than B/Victoria epidemics5. This may make B/Yamagata more vulnerable to breakdowns in onward transmission, especially in the context of social distancing and movement restrictions. Furthermore, although multiple B/Yamagata clades can co-circulate for extended periods, previously long-lived clades went extinct6,7.

The Storm Before the Storm: An Interview With Historian and Podcast Superstar Mike Duncan Mike Duncan couldn’t find a good podcast on the topic of ancient history, a subject he had fallen in love with, so he made his own. That show, The History of Rome, which began as a hobby, would go on to be downloaded more than 100 million times, and is one of the most popular and beloved podcasts of all time. Now, more than ten years after first starting the podcast, Mike has written his first book, The Storm Before the Storm: The Beginning of the End of the Roman Republic, which examines the events that set the stage for Rome’s fall.

How to be mediocre and be happy with yourself Image copyright Thinkstock In the novel Catch-22, the author Joseph Heller famously wrote: "Some men are born mediocre, some men achieve mediocrity, and some men have mediocrity thrust upon them." He'd taken a quote by Shakespeare on greatness and turned it on its head. ‘I hope you die’: how the COVID pandemic unleashed attacks on scientists Infectious-diseases physician Krutika Kuppalli had been in her new job for barely a week in September 2020, when someone phoned her at home and threatened to kill her. Kuppalli, who had just moved from California to the Medical University of South Carolina in Charleston, had been dealing with online abuse for months after she’d given high-profile media interviews on COVID-19, and had recently testified to a US congressional committee on how to hold safe elections during the pandemic. But the phone call was a scary escalation. “It made me very anxious, nervous and upset,” says Kuppalli, who now works at the World Health Organization (WHO) in Geneva, Switzerland. She called the police, but didn’t hear that they took any action.

How to do the most work in the shortest time We are designed by evolution to be busy. That’s OK for the caveman, who needs to feed himself; not OK for you in the 21st-century when you have to deal with an ever-growing range of tempting distractions. Which is why it is so baffling that Paris has been identified as the city with the shortest working week, when France is renowned for having higher productivity than the UK. As a coach who specialises in enabling people to get more done more quickly, I notice that those who get the most worthwhile work done in the smallest amount of time follow a set of rules. Oddly, we are never taught these rules, and most of us just stick to the same old unconscious (bad) habits. Here are eight rules to help you get the most done in the shortest time: