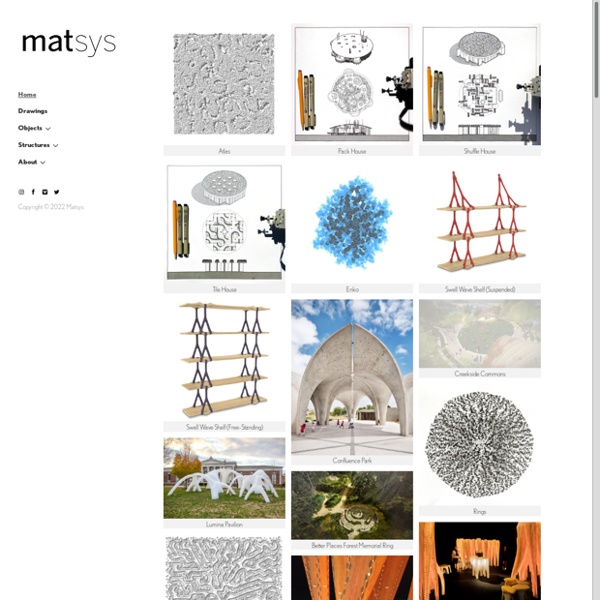 Parametric World a3reel: Prove di voxelizzazione dipendente dai vettori del campo fluidodinamico.Catalogazione dei risultati variando:-il numero di celle in cui è diviso il campo-soglia-parametri di coesione,allineamento,separazione degli agents-viscosità,diffusione,influenza del fluido sugli agents,influenza degli agents sul fluido.I risultati ottenuti forniscono una gamma di mesh più o meno compatte a seconda della variazione dei parametri. design playgrounds Posts Tagged ‘Parametric Architecture’ We are happy and excited to announce that finally after a long time we have a launch day for ThinkParametric. Hy-FI is the winning proposal for this year MoMA´s PS1 competition, a tower-like topology volume composed by compostable bricks that use corn stalks and mushroom roots in their process of elaboration. In this tutorial you will learn how can you create shell-like surfaces made of planar hexagons using Kangaroo´s Planrization Forces. The Centenial Chromagraph is an installation/ data visualization portraying the history of the University of Minnesota School of Architecture.Their creators refer to it as an exercise in data spatialization where the use of computational tools were employed to generate formal and spatial constructions with large quantities of data.

no boxes! Fritz Obermeyer’s Jenn is a nicely crafted java application that allows a playful examination of structures in non-Euclidian space, more specifically Coxeter polytopes in stereographic projection. These complex geometric structures are the 4-dimensional Sisters to the polyhedra and have, what seems like, recursive interiors and packing formations that resemble bubbles in foam. The applet allows you to fly through these structures and orient the camera view according to your whims; other controls include toggles for the kind of rendering display settings. Perhaps I shouldn’t report it, but there are also some nice rendering glitches on some of the selected models on certain views.

codedchromics I hadn’t heard about this before but fist (whoops, mean first) saw this earlier this month mentioned on Syuzi Pakhchyan’s blog Wearable Technology (always an inspiration!) Sophie de Oliveira Barata offers a ‘real’ option ‘surreal’ option and an ‘unreal’ option – you’ve just got to love that! Here are some of the incredible decorated and unusual prosthetics from The Alternative Limb Project - “The Alternative Limb Project offers a personal and friendly bespoke service, which provides unique prosthetics to blend in with the body or stand out as a unique piece of art, reflecting the wearer’s imagination, personality and interests.

Inside Smartgeometry Inside Smartgeometry: Expanding the Architectural Possibilities of Computational Design Edited by Brady Peters and Terri Peters Structural Tessellations and Morphologies The honeycomb is probably the epitome of structural efficiency. Bees have been creating hexagonal comb structures for millenia and humans inspired by the incredible structural strength to weight ratio of their combs have joined them. It is said that the first man-made honeycomb was made by Daedalus using gold by lost wax casting more than 3000 years ago. In 1859 Charles Darwin said that “the comb of the hive-bee, as far as we can see, is absolutely perfect in economizing labour and wax”. Little noticed is that even the the closed ends of the honeycomb cells are also an example of geometric efficiency as their trihedral shape allows two opposing honeycomb layers to nest into each other, with each facet of the closed ends being shared by opposing cells. 50 years later D’Arcy Wentworth Thompson discovered that bees build their honeycombs first as cylinders and as they push more wax onto the inside surface they also push the soft sides out and up against the neighboring cylinders.

concept SKETCH IIT design studio fabricates pavilion of carbon fiber panels via Grasshopper : Parametric Space Lecture: World Space & Parametric Space; Curve & Surface Evaluation; Re-parametrization Training: 2D Grids; Point Decomposition; Numbers Remapping; Numbers Formatting; 3D Poly-lines Workshop: Structural Building Skin Based on a Polygonal Grid Here is the workshop Grasshopper definition … Here is a quick review of the workshop … Emergent Phenomena in Nature Nature offers many familiar examples of emergence, and the Internet is creating more. The following examples of emergent systems in nature illustrate the kinds of feedback between individual elements of natural systems that give rise to surprising ordered behavior. They also illustrate a clear trade off between the number of elements involved in the emergent system and the complexity of their individual interactions.

Emergence Emerges How to self-organize without requiring a blowhard. Emergence is a phenomenon, or more properly one of several phenomena, that is still debated. It is something that results from a collection of smaller units, that cannot be predicted from observation of the smaller units. Like the conical shape of a pile of sand, for example. from observing grains of sand, one wouldn’t be able to predict the regular conical form that it assumes when piled, and when that pile increases. Regardless of the size of the pile of sand, the angle of its sides remain constant. (although whether any given phenonmenon is considered emergent or not is yet debated between and among philosophers, scientists and dilettants). Room Dividers: 15 Free-Standing Walls & Folding Screens Room Dividers: 15 Free-Standing Walls & Folding Screens Article by Steph, filed under Furniture & Decor in the Design category. Want a really cool wall but don’t want to build one? Conventional curtains and traditional shoji screens aren’t the only ways to visually break up interior spaces. These 15 innovative and artistic room dividers – including colorful plastic panels, strange plant-like modular screens, real green and growing separators and flexible walls made of wood – also function as works of art, lighting and even furniture.

Voussoir Cloud By IwamotoScott Architecture The Voussoir Cloud by San Francisco-based architects, IwamotoScott, is a site-specific architectural installation using an age-old masonry vault paradigm with an intent to “confuse the structural and material strategies”. A series of intricate geometric studies and structural simulations result in a system of compressed vaults created by grouping together a light-weight, wedge-shaped modular element called the Voussoir. At closer look, the Voussoir, or petal, is formed by folding paper-thin wood laminate along curved seams, and are key structural components in forming the arches. Simply a solid piece, and breathtaking, especially with the experience of light and shadow, as if you’re walking through clouds. Don’t go yet. More images after the break!