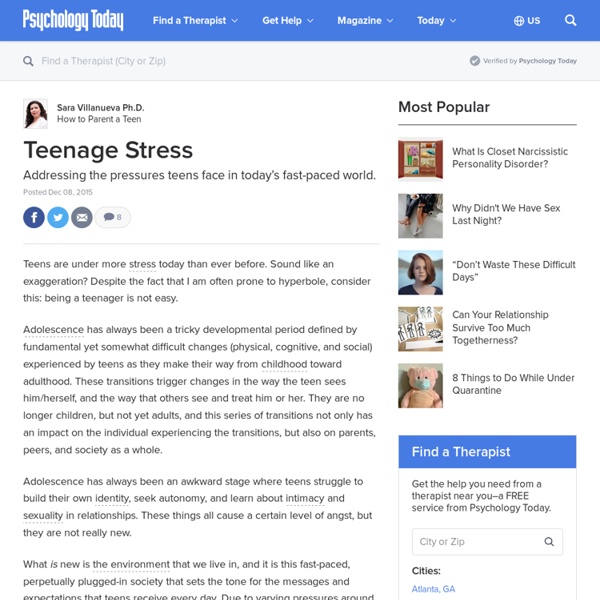 Teens are under more stress today than ever before. Sound like an exaggeration? Despite the fact that I am often prone to hyperbole, consider this: being a teenager is not easy. Adolescence has always been a tricky developmental period defined by fundamental yet somewhat difficult changes (physical, cognitive, and social) experienced by teens as they make their way from childhood toward adulthood. These transitions trigger changes in the way the teen sees him/herself, and the way that others see and treat him or her. They are no longer children, but not yet adults, and this series of transitions not only has an impact on the individual experiencing the transitions, but also on parents, peers, and society as a whole. article continues after advertisement Adolescence has always been an awkward stage where teens struggle to build their own identity, seek autonomy, and learn about intimacy and sexuality in relationships. So, why are teens so “angsty” today? What can parents do?

What Are the Effects of Cyberbullying? Bullying—including cyberbullying—causes significant emotional, psychological, and physical distress. Just like any other victim of bullying, cyberbullied kids experience anxiety, fear, depression, and low self-esteem. They also may experience physical symptoms, mental health issues, and struggle academically. Here's a closer look at the emotional, mental, and physical effects of cyberbullying. Emotional Effects of Cyberbullying 7 ways to practice emotional first aid You put a bandage on a cut or take antibiotics to treat an infection, right? No questions asked. In fact, questions would be asked if you didn’t apply first aid when necessary. So why isn’t the same true of our mental health?

Talking About Your Stress: A Simple Way To Put It in Perspective Stress does not discriminate. No one is immune from the strains and pressure of everyday life. It is caused by work, school, family situations or just general worry. Treatment for stress has been getting lots of attention, and from meditation to exercise, there are almost as many ways to try and deal with it as there are causes. Workplace Stress - The American Institute of Stress Although the Institute is often asked to construct lists of the “most” and “least” stressful occupations, such rankings have little importance for several reasons. It is not the job but the person-environment fit that matters. Some individuals thrive in the time urgent pressure cooker of life in the fast lane, having to perform several duties at the same time and a list of things to do that would overwhelm most of us — provided they perceive that they are in control. They would be severely stressed by dull, dead-end assembly line work enjoyed by others who shun responsibility and simply want to perform a task that is well within their capabilities. The stresses that a policeman or high school teacher working in an inner city environment are subjected to are quite different than those experienced by their counterparts in rural Iowa. Stress is a highly personalized phenomenon and can vary widely even in identical situations for different reasons.

Number of male teenage suicides hits record high, Singapore News SINGAPORE - The number of teenage boys taking their own lives reached a record high last year. Nineteen boys aged 10 to 19 committed suicide in 2018, the highest since suicide figures began being recorded in 1991. In 2017, there were seven suicides by teenage boys. The total number of suicides also rose last year, with 397 reported – up from 361 in 2017, but still fewer than the 429 in 2016. Stress May Trigger Mental Illness and Depression In Teens - Depression Center - EverydayHealth.com Your teenage years should be among the best times of your life. But the truth is that severe depression in teens is common. Up to 30 percent of adolescents have at least one episode of it, and 50 to 75 percent of adolescents with anxiety, impulse control, and hyperactivity disorders develop them during the teenage years. The effect on troubled teens is far-reaching.

Start every day with a good night’s sleep How many hours a week do teenagers spend on homework? The average teenager spends more than 15 hours a week on homework. On a typical school night, they spend over 2 hours on homework. The more stress a teen feels, the more likely they are to spend even more time on homework.