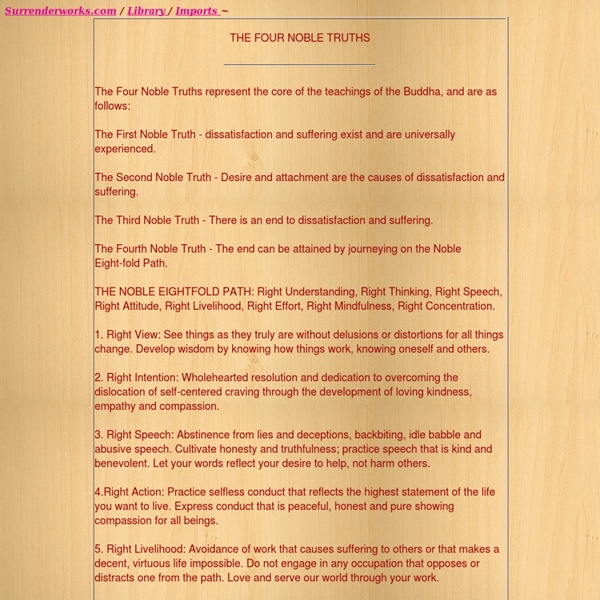 Buddhist Beliefs Explained Sangha is the word for the community of Buddhists; those people seeking enlightenment by practicing the Dharma. Buddha said that the only way to realize the Dharma was in community, so the Sangha is an important part of this process. So Buddhists take refuge by a respectful repeating of this word “Sangha”. Dhammapada, wrote sometime between 188-192 Peals of Wisdom A collection of sayings, quotes and wisdom reflecting Buddhism or Zen philosophy and teachings, including sayings of the Buddha and Dalai Lama. On life's journey Faith is nourishment, Virtuous deeds are a shelter, Wisdom is the light by day and Right mindfulness is the protection by night. If a man lives a pure life nothing can destroy him; If he has conquered greed nothing can limit his freedom. Buddha Believe nothing on the faith of traditions, even though they have been held in honor for many generations and in diverse places.

Twelve-step program admitting that one cannot control one's addiction or compulsion;recognizing a higher power that can give strength;examining past errors with the help of a sponsor (experienced member);making amends for these errors;learning to live a new life with a new code of behavior;helping others who suffer from the same addictions or compulsions. Overview[edit] Twelve-step methods have been adopted to address a wide range of substance-abuse and dependency problems. Over 200 self-help organizations—often known as fellowships—with a worldwide membership of millions—now employ twelve-step principles for recovery. Narcotics Anonymous was formed by addicts who did not relate to the specifics of alcohol dependency.[3] Similar demographic preferences related to the addicts' drug of choice has led to the creation of Cocaine Anonymous, Crystal Meth Anonymous, Pills Anonymous and Marijuana Anonymous.

William Blake William Blake (28 November 1757 – 12 August 1827) was an English poet, painter, and printmaker. Largely unrecognised during his lifetime, Blake is now considered a seminal figure in the history of the poetry and visual arts of the Romantic Age. His prophetic poetry has been said to form "what is in proportion to its merits the least read body of poetry in the English language".[2] His visual artistry led one contemporary art critic to proclaim him "far and away the greatest artist Britain has ever produced".[3] In 2002, Blake was placed at number 38 in the BBC's poll of the 100 Greatest Britons.[4] Although he lived in London his entire life (except for three years spent in Felpham),[5] he produced a diverse and symbolically rich oeuvre, which embraced the imagination as "the body of God"[6] or "human existence itself".[7] Early life[edit] 28 Broad Street (now Broadwick Street) in an illustration of 1912. Blake was born here and lived here until he was 25.

Buddhism: a diagram I created this diagram to assist my future posts on Buddhist themes. Below are links and texts to help explain the outline. It is my hope that this diagram aids the reader in visually organizing the dharma (the Buddha’s teachings) in a way that makes it easier to remember, question and discuss. Sectarianism: Just as in Christianity, Islam, Judaism, Hinduism …, Buddhism has a plethora of sects. Each sect has its own spin on doctrines with similar names. This model contains much which is common between Buddhist sects but each sub-aspect is handled differently between the sects.Terms: The early texts of Buddhism are in Sanskrit and Pali.

Gautama Buddha Hatred does not cease by hatred, but only by love. This is the eternal rule. Gautama Buddha (c. 563 – c. 483 BC) was a teacher and religious leader. Atheist's Wager - Wikipedia, the free encyclopedia One formulation of the Atheist's Wager suggests that one should live a good life without religion, since Martin writes that a loving and kind god would reward good deeds, and if no gods exist, a good person will leave behind a positive legacy.[1][2] The second formulation suggests that, instead of rewarding belief as in Pascal's wager, a god may reward disbelief, in which case one would risk losing infinite happiness by believing in a god unjustly, rather than disbelieving justly.[3] Explanation[edit] The Wager states that if you were to analyze your options in regard to how to live your life, you would come out with the following possibilities:[1][4][5] The following table shows the values assigned to each possible outcome: A benevolent god exists No benevolent god exists

The Seven Spiritual Laws of Success by Deepak Chopra The Seven Spiritual Laws of Success by Deepak Chopra The Law of Pure Potentiality Take time to be silent, to just BE. Meditate for 30 minutes twice a day. Silently witness the intelligence within every living thing. Practice non-judgment. 7 ideas for recycling your clutter It’s spring-cleaning time and with that comes your yearly clutter purge. But before you start tossing unneeded items in the trash, consider putting them to better use. From eyewear and electronics to clothes and furniture, the following organizations accept a wide range of basic and unexpected goods that can benefit others in need. Plus you’ll be helping to keep these items out of landfills, and, in many cases, you could get something that’s hard to pass up—a tax deduction. 1.

Five hindrances The five hindrances are:[web 1][web 2] Sensory desire (kāmacchanda): the particular type of wanting that seeks for happiness through the five senses of sight, sound, smell, taste and physical feeling.Ill-will (vyāpāda; also spelled byāpāda): all kinds of thought related to wanting to reject, feelings of hostility, resentment, hatred and bitterness.Sloth-torpor (thīna-middha): heaviness of body and dullness of mind which drag one down into disabling inertia and thick depression.Restlessness-worry (uddhacca-kukkucca): the inability to calm the mind.Doubt (vicikicchā): lack of conviction or trust. Overview[edit] Within the Buddhist traditions[edit]

Buddhism: 11 Common Misunderstandings and Mistakes People believe many things about Buddhism that simply are incorrect. They think Buddhists want to get enlightened so they can be blissed out all the time. If something bad happens to you, it's because of something you did in a past life. Everybody knows that Buddhists have to be vegetarians. 24 smart uses for sugar The history of sugar is not a simple one. From ancient China to the colonies to Candy Land, sugar has been making its mark throughout time in myriad ways. The "white gold," as British colonists called it, has now reached mundane staple status for much of the western world, sitting in a five-pound bag in the pantry patiently waiting to be spooned into a cup of coffee or employed in a batch of cookie dough. But that doesn't mean the coruscating carbohydrate can't be put to other uses. In a bind, regular table sugar can pinch-hit for a number of other concoctions, often times taking the place of more costly or possibly toxic solutions.

6 Questions That Will Make You Fee Peaceful and Complete “The best place to find a helping hand is at the end of your own arm.” ~Swedish Proverb When I was in my mid-twenties an unhealthy relationship with an unhealthy guy sent me packing off to the corner of New Mexico to find myself. In a new age, self-discovery kind of world—a hubbub of a town filled with people in transition—I was graced to meet many powerful healers, gurus, shamans, and teachers.