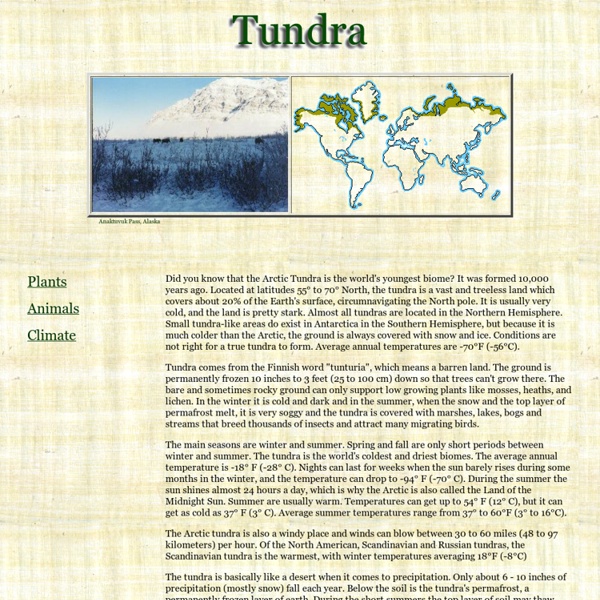 Did you know that the Arctic Tundra is the world's youngest biome? It was formed 10,000 years ago. Located at latitudes 55° to 70° North, the tundra is a vast and treeless land which covers about 20% of the Earth's surface, circumnavigating the North pole. It is usually very cold, and the land is pretty stark. Almost all tundras are located in the Northern Hemisphere. Tundra comes from the Finnish word "tunturia", which means a barren land. The main seasons are winter and summer. The Arctic tundra is also a windy place and winds can blow between 30 to 60 miles (48 to 97 kilometers) per hour. The tundra is basically like a desert when it comes to precipitation. There is barely any vegetation in the tundra, only about 1,700 different species, which isn't very much. Surprisingly there are animals in the tundra. The tundra is one of Earth's three major carbon dioxide sinks. The tundra is a very fragile environment. The tundra is not a cold and useless wasteland. by Whitney S. 2002 Related:  Alpine/Tundra Biome

The Alpine Biome The Alpine Biome Alpine biomes by their nature do not fit into a simple climatic scheme. In general, as one ascends a mountain, temperature drops by about 10 C for every 1000 meters in altitude gained (a suspiciously round number!). This means that if you start at sea level at 30 C and go up 1,000 meters the temperature will be 20 C; at the top of a 3,000 meter mountain the temperature will be 0 C. In these web pages the alpine "biome" will be considered to be the upper altitudes of mountains, where cooler climates give rise to communities which resemble (but do not duplicate) the taiga, tundra and ice biomes. As you can see on the map above, alpine conditions are found in the great mountain ranges of the world. Most of the mountain ranges are associated, of course, with plate tectonics. See Also - Boreal Forests Back

Tundra Advertisement. EnchantedLearning.com is a user-supported site. As a bonus, site members have access to a banner-ad-free version of the site, with print-friendly pages.Click here to learn more. (Already a member? Click here.) Tundra Animal Printouts The tundra is a cold, treeless area; it is the coldest biome. There are two types of tundras, Arctic tundras and alpine tundras. Arctic tundras are frozen, windy, desert-like plains in the Arctic that are dotted with bogs and ponds. Printable Activities: Alpine Biome at Animal Corner Terrestrial Biome - Alpine During the summertime, temperatures in Alpine biomes reach around 40 to 60 degrees fahrenheit, however, come winter, temperatures are well below freezing and as the altitude increases, it can get much colder. Alpine temperatures are dynamic and can change from warm to cold in one day. Winter seasons last from October to May and summer from June to September. Animals that live in the Alpine Biome Animals that live in the Alpine regions have to adapt to two different problems. Alpine animals are naturally aided to adapt to Alpine climates by having shorter limbs such as legs, ears and tails. Despite the challenging landscape and harsh climate, here is a list of animals and birds that live in the Alpine Biome. Other animals living high in the mountains are: alpine versions of geckos and skunks, spiders, dragonflies, cockroaches, wētā, grasshoppers, cicadas, flies, moths, flatworms and giant snail.

The Tundra Biome Tundra is the coldest of all the biomes. Tundra comes from the Finnish word tunturia, meaning treeless plain. It is noted for its frost-molded landscapes, extremely low temperatures, little precipitation, poor nutrients, and short growing seasons. Dead organic material functions as a nutrient pool. The two major nutrients are nitrogen and phosphorus. Characteristics of Tundra Extremely cold climate Low biotic diversity Simple vegetation structure Limitation of drainage Short season of growth and reproduction Energy and nutrients in the form of dead organic material Large population oscillations Arctic Arctic tundra is located in the northern hemisphere, encircling the north pole and extending south to the coniferous forests of the taiga. AlpineAlpine tundra is located on mountains throughout the world at high altitude where trees cannot grow.

KDE Santa Barbara Location | Weather | Plants | Animals | People | Links LOCATION: What do you think of when you hear the word “alpine”? Perhaps mountains or skiing? Well, you are right. Alpine biomes are found in mountain regions worldwide, including the Andes, Alps, and Rocky Mountains. WEATHER: In the summer average temperatures range from 40 to 60°F (4.5 to 15.5°C). PLANTS: The alpine biome is a tough place for plants to live. ANIMALS: Can you imagine living in a cold, windy place without much shelter? One interesting alpine animal is the chinchilla. PEOPLE AND THE ALPINE BIOME: You’ve probably heard of mount Everest and the Sherpas who help people climb it. Blue Planet Biomes: Alpine GF Awesome: Subalpine Ecosystems Back to Biomes Index

Tundra Temperature -40°C to 18°C Precipitation 150 to 250 mm of rain per year Vegetation Almost no trees due to short growing season and permafrost; lichens, mosses, grasses, sedges, shrubs Location Regions south of the ice caps of the Arctic and extending across North America, Europe, and Siberia (high mountain tops) Other Tundra comes from the Finnish word tunturia, meaning "treeless plain"; it is the coldest of the biomes Example: Yakutsk, Russia Description The tundra is the coldest of the biomes. Tundra winters are long, dark, and cold, with mean temperatures below 0°C for six to 10 months of the year. Precipitation in the tundra totals 150 to 250 mm a year, including melted snow. Vegetation in the tundra has adapted to the cold and the short growing season. LinksTundra BiomeBiome Descriptions (Thurston High School, Springfield, OR)Tundra Description (via UC Berkeley)Cladina stellaris picture

Tundra Tundras are among Earth's coldest, harshest biomes. Tundra ecosystems are treeless regions found in the Arctic and on the tops of mountains, where the climate is cold and windy and rainfall is scant. Tundra lands are snow-covered for much of the year, until summer brings a burst of wildflowers. Mountain goats, sheep, marmots, and birds live in mountain, or alpine, tundra and feed on the low-lying plants and insects. The Arctic tundra, where the average temperature is 10 to 20 degrees Fahrenheit (-12 to -6 degrees Celsius), supports a variety of animal species, including Arctic foxes, polar bears, gray wolves, caribou, snow geese and musk-oxen. The few plants and animals that live in the harsh conditions of the tundra are essentially clinging to life. The Arctic tundra is changing dramatically due to global warming. With global warming, the fall freeze comes later and more of the permafrost is melting in the southern Arctic.

Tundra Animals Brown bear › The brown bear can be found in the tundra regions of Alaska, Canada, and parts of Russia. In winter months, it digs a snug den in the ground and hibernates (a deep sleep). Brown bear › Reindeer › Reindeer have thick fur that protects them from the cold in the tundra region. Caribou › Mountain hare › The mountain hare grows a white coat in winter. Mountain hare › Canadian lynx › This small cat’s brown coat blends in well with the tundra landscape in summer. Small cats › Snow bunting › Few birds can survive the long, dark winters of tundra. Snow bunting › Arctic poppy › The Arctic poppy has tiny flowers that turn their heads to follow the sun. Flowering plants ›