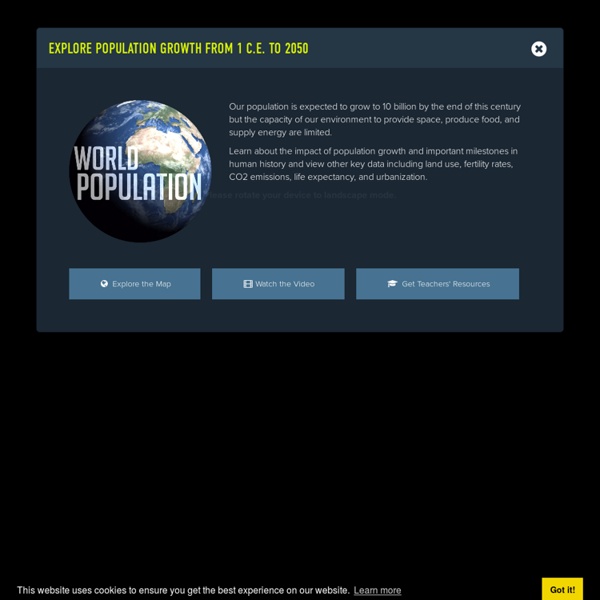 Related:  Population • Industralització • what a mess...

3D Mapping The Largest Population Density Centers Since their invention, automobiles have been a driving force of the global economy. Used by millions of people to get to work, transport goods, and travel, the modern automobile has become ubiquitous in our daily lives. So much so, that a whopping 92 million cars were produced in just 2019. Industrial Modernization Industrial Modernization, or Industrial Revolutions = Prelude, Three Phases and a Taxonomy © 2010 KIMBALL FILES Phases = 0. Prelude, "Agricultural revolution" or transformation of pre-modern village life A.

Study: Collapsing Birth Rates & Population to Have 'Jaw-Dropping' Impact Get the latest from The Mind Unleashed in your inbox. Sign up right here. (TMU) – Researchers are decrying collapsing birth rates around the world, which they warn will result in profound social change if governments don’t roll out new reproductive health policies. Spain, Japan, Portugal and Thailand are among the 23 countries that could see their populations more than half in a “jaw-dropping” trend. While the global population is expected to peak at about 9.7 billion around 2064, the population will fall to 8.8 by the end of the 21st century. “That’s a pretty big thing; most of the world is transitioning into natural population decline,” Professor Christopher Murray told BBC News.

Untitled Document Now that we have looked at how and why the Industrial Revolution occurred, it’s time to consider its effects on people. We learned that industrial production increased tremendously, bringing wealth and power to Great Britain throughout the 19th century. But we have yet to explore the effects of industrialization on society, on the daily living and the working conditions of common people. George Barron calls on his experience of Brenig, Conn, Chew Valley and Loch Harray to choose the three flies he'd depend on for a red-letter day in fair wind and a rolling wave. For the sedentary angler a combination of big wind and fishing might not seem the ideal recipe for a day in a boat, but over the years it has provided me with some of my most memorable days afloat and some of my most memorable fish. What could be better than a lovely, rolling wave coming down the loch and enough wind blown or hatching fly life to hold the trout feeding on top?

At the Davos Economic forum, Jane Godall and Al Gore said inequality is to blame for climate chang The annual World Economic Forum in Davos brought together representatives from government and business to deliberate how to solve the worsening climate and ecological crisis. The meeting came just as devastating bush fires were abating in Australia. These fires are thought to have killed up to one billion animals and generated a new wave of climate refugees. Yet, as with the COP25 climate talks in Madrid, a sense of urgency, ambition and consensus on what to do next were largely absent in Davos. But an important debate did surface – that is, the question of who, or what, is to blame for the crisis.

The Industrial Revolution In this article Matthew White explores the industrial revolution which changed the landscape and infrastructure of Britain forever. The 18th century saw the emergence of the ‘Industrial Revolution’, the great age of steam, canals and factories that changed the face of the British economy forever. Early industry How to return every fish in perfect condition: 16 top catch and release fishing tips – Lines on the Water As any true angler will tell you, releasing a fish unharmed is as satisfying as catching it in the first place. Not only is it usually a legal requirement in England and Wales, it means that fish can go on to thrive and reproduce. It might also give another angler the same enjoyment, especially if it grows bigger.