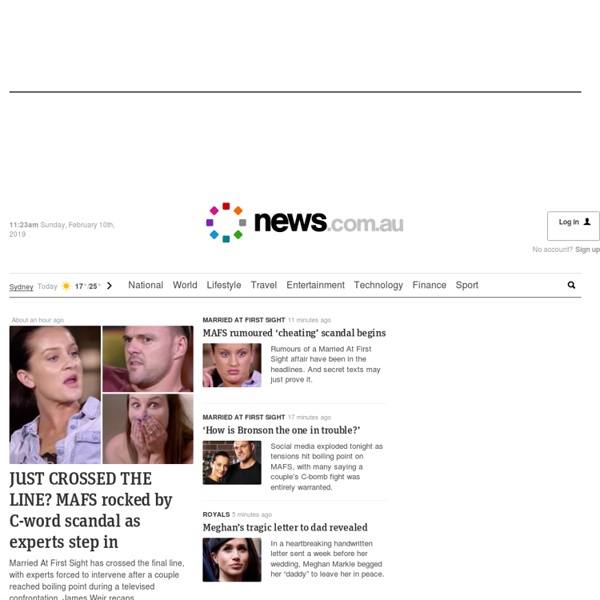 Australian Debt Clock Blog Post 12| 27th December 2015 U.S. Federal Reserve Breaks Bad In the wind up of 2015 the Federal Reserve (FED, U.S. Central Bank) has made a counter logical (logical, in terms of their theoretical mandate) decision to increase interest rates, effectively reducing the amount of liquidity that will be available into 2016. User Vill · Bookmarks Hello I'm vill! Member Since: Oct 17, 2011Public Bookmarks: 99Private Bookmarks: 0Total Bookmarks: 99 My Public Bookmarks! How Can Family Trust Do Good To You Australia, unlike US and UK, is a peaceful country.

Nocookies You have cookies turned off To use this website, cookies must be enabled in your browser. To enable cookies, follow the instructions for your browser below. Facebook App: Open links in External Browser There is a specific issue with the Facebook in-app browser intermittently making requests to websites without cookies that had previously been set. This appears to be a defect in the browser which should be addressed soon.

Extreme Photo of the Week Photograph by Mike Schirf “I love the skiing down the best, but I don't love the skinning up,” says 11-year-old Lilliana Libecki, seen here with her dad, Mike, on their recent sailing-skiing expedition to the Antarctic Peninsula in front of Paradise Bay and a colony of Gentoo penguins. It was Lilliana’s very first expedition with her dad, a National Geographic Adventurer of the Year, Expeditions Council grantee, and veteran of 50-some remote expeditions. Topix - Australia News 1 hr ago | The Age The making of an unlikely radical Hated by progressives for his role in Gough Whitlam's dismissal and his ultra-conservative foreign policies when Liberal PM, Malcolm Fraser today believes Australia should cut all military ties to the US.

Self Managed Super Fund Benefits, Contributions Our trust deeds provides instant answers to most common questions on day to day running of a SMSF instead of referring common issues to the SIS Act, thus providing instant reference for research on SMSF strategies to maximize wealth at retirement. You will find that most SMSF trust deeds in the market place are prescriptive. What this means for you is that, various clauses of the deed will state “refer to or .....as per Superannuation law” and not give you an instant answer to your query.

WHAT’S GOING ON IN THIS PICTURE - The Learning Network Blog Photo Students 1. After looking closely at the image above (or at the full-size image), think about these three questions: ABC Australia 'I'm Scottish': Gutted Lambie to quit Senate in latest citizenship shock Jacqui Lambie broke down in a radio interview this morning as she confirmed she will resign from the Senate because she holds British citizenship, telling listeners she always thought she was "Australian as they bloody come". How your MP will vote if Australia says Yes to same-sex marriage We've asked every federal politician what they intend to do if same-sex marriage gets to a vote in Parliament. On the numbers we've gathered, both houses would pass a bill to change the law. Check out what your local member will do. Wong says alternative same-sex marriage bill a 'licence to discriminate' It's Kristina Keneally vs John Alexander in the by-election battle for Bennelong Labor nominates the former New South Wales premier to run in the Bennelong by-election against John Alexander, in a contest that could upset the Federal Government's fragile majority and cause major headaches for Malcolm Turnbull.

Immigrant earnings ‘a failure’ - Göteborg Daily Refugees and other immigrant groups are finding it hard to establish themselves in the labour market, even after 10 years in Sweden, suggests a report from daily newspaper Dagens Nyheter. The newspaper followed the progress of nearly 15,500 immigrants of working age who received permanent residency in 2004 and are still registered in Sweden. After ten years, those who came here as refugees earned a median wage of only 11,100 kronor per month - less than half the figure for the entire population. Around three out of ten receive welfare benefits from the municipality.

NewStatesman - Russell Brand on revolution IIn the summer of 1970, a 34-year-old Welsh artist with a shock of prematurely white hair and a thick, moustache-less goatee was asked by the Times to draw political cartoons during the general election campaign. Idealistic and mistrustful of authority, Ralph Steadman saw little that was likeable or even distinguishable in the Conservative Party’s Edward Heath and Labour’s Harold Wilson. But he had four children to support from a recently ended marriage and needed a steady income, so he accepted the assignment – and got on with causing offence.