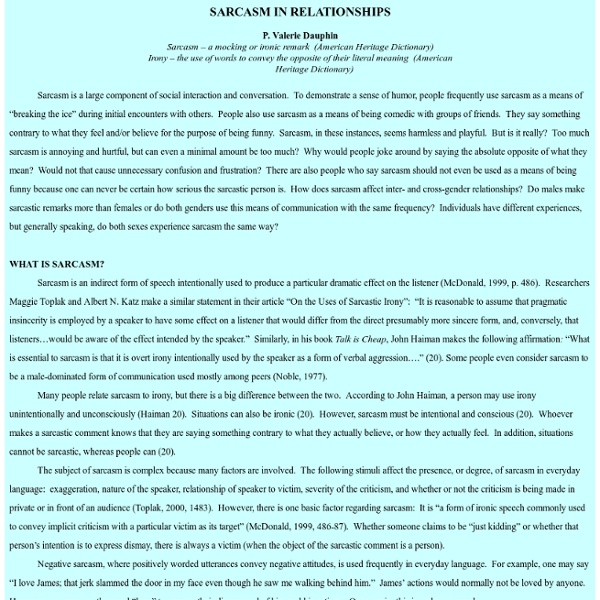 Sarcasm – a mocking or ironic remark (American Heritage Dictionary) Irony – the use of words to convey the opposite of their literal meaning (American Heritage Dictionary) Sarcasm is a large component of social interaction and conversation. To demonstrate a sense of humor, people frequently use sarcasm as a means of “breaking the ice” during initial encounters with others. People also use sarcasm as a means of being comedic with groups of friends. Sarcasm is an indirect form of speech intentionally used to produce a particular dramatic effect on the listener (McDonald, 1999, p. 486). Many people relate sarcasm to irony, but there is a big difference between the two. The subject of sarcasm is complex because many factors are involved. Negative sarcasm, where positively worded utterances convey negative attitudes, is used frequently in everyday language. Sarcasm has been found to be “morphologically simpler and more flexible to use than direct forms” (McDonald, 1999, 487). *Question 2.

7 Lessons From 7 Great Minds Have you ever wished you could go back in time and have a conversation with one of the greatest minds in history? Well, you can’t sorry, they’re dead. Unless of course you’re clairaudient, be my guest. But for the rest of us, we can still refer to the words they left behind. Even though these great teachers have passed on, their words still live, and in them their wisdom. I’ve made a list of seven what I believe are some of the greatest teachings by the world’s greatest minds. How To Be Happy in a Relationship- 10 Habits of Happy Couples What does it take to be happy in a relationship? If you're working to improve your marriage, here are the 10 habits of happy couples. 1. Go to bed at the same timeRemember the beginning of your relationship, when you couldn't wait to go to bed with each other to make love?

Social learning theory Social Learning Theory from notes on Ormond's Human Learning [ref: Ormrod, J.E. (1999). Creativity tied to mental illness - StumbleUpon Irrelevance can make you mad By William J. Cromie Harvard News Office Ignoring what seems irrelevant to your immediate needs may be good for your mental health but bad for creativity. Focusing on every sight, sound, and thought that enters your mind can drive a person crazy. It interferes with an animal's hunt for something to eat, or a busy person's efforts to sleep.

Headphones Mixing? Speakers Mixing? Both? By Roey Izhaki By Guest Blogger Categories: Mixing Techniques Headphones vs. speakers – the theory When listening on headphones, both the left and right ears are fed exclusively with the corresponding channel. This means that the left-channel signal reaches the left ear only, and the right-channel signal reaches the right ear only.

The Power of Now The Power of Now: A Guide to Spiritual Enlightenment is a book by Eckhart Tolle. The book is intended to be a self-help guide for day-to-day living and stresses the importance of living in the present moment and avoiding thoughts of the past or future. Published in the late 1990s,[1] the book was recommended by Oprah Winfrey[2] and has been translated into 33 languages.[3] As of 2009, it was estimated that three million copies had been sold in North America.[4] Overview[edit] The book draws from a variety of "spiritual traditions",[5] and has been described by one reviewer as "Buddhism mixed with mysticism and a few references to Jesus Christ, a sort of New Age re-working of Zen

15 Ways to Get Past an Awkward Moment Aug 13, 2012 We’ve all been in awkward situations, our lives are full of them. Nobody’s perfect, but how you handle it can turn an awkward moment into a partial win. Below you will see 15 awkward situations and what these people did to try and turn it around. Criticism, Cheerleading, and Negativity - Nightly There is the perception, particularly in American culture, that criticism and negativity go hand-in-hand. We understand well the idea of being in favor or something, or against something, but we don’t particularly understand how criticism fits into this dichotomy. As someone with a penchant for criticism, I’ve often found myself misjudged as “being negative” when mere complaint is furthest from my intention. I’m here to explain myself and people like me. Criticism Is Not Negativity The reason a person is critical of a thing is because he is passionate about that thing.

Welcome to Adobe GoLive 6 - StumbleUpon From Los Angeles Times: It's not all about you Chances are, others aren't judging you as harshly as you think, if at all. By Benedict Carey Times Staff Writer