How to Make a terrarium 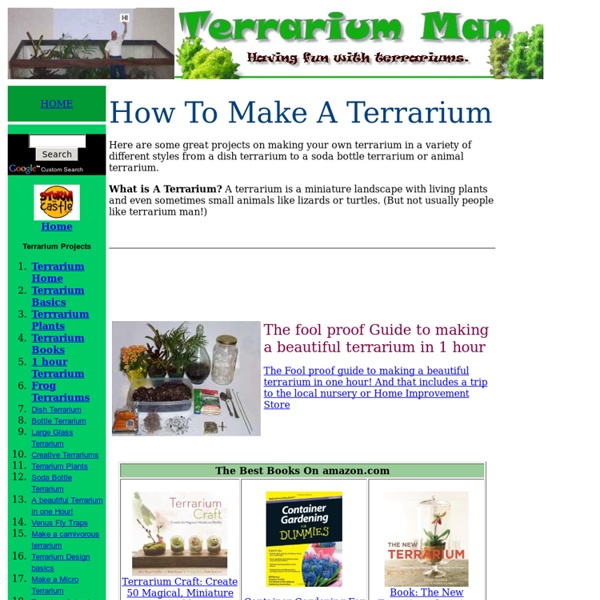 How To Make A Terrarium Here are some great projects on making your own terrarium in a variety of different styles from a dish terrarium to a soda bottle terrarium or animal terrarium. What is A Terrarium? A terrarium is a miniature landscape with living plants and even sometimes small animals like lizards or turtles. (But not usually people like terrarium man!) The fool proof Guide to making a beautiful terrarium in 1 hour The Fool proof guide to making a beautiful terrarium in one hour! New: My Terrarium Making ebook I spent eight days writing this 40 page ebook and made three terrariums specifically for it. it is my ebook: The Secret art of terrarium making: Revealed! New project: A terrarium in a terrarium We put together this fun little terrarium. Freeze your moss to store it If you are not going to use all the moss you collected or bought you can freeze it to keep it long term. Make a mini Greenhouse Starting out plants or taking cuttings for plants is a great thing. Moss Terrariums! Related:  The Garden

15 birds with snazzier hairdos than you Birds are naturally stylish. Their feathers come in an array of colors, textures and shapes, and every now and then all the elements come together for the perfect hairdo. The Victoria crowned pigeon (shown above) is the perfect example with a crown of delicate feathers topping its noggin. Some species have been graced with good hair for mating advantages, but regardless of the reason — these birds have head-turning tresses: Dalmatian pelican Big Bird's got nothing on the tousled feathers that top the Dalmatian pelican's head. Crested partridge This fluffy red pouf belongs to this tropical ground bird that thrives throughout the rain forests of Southeast Asia. Great curassow Check out those curls! Andean cock-of-the-rock A surge of orange in the Andean cloud forests, this flashy male bird makes a show for the females during mating season. Himalayan monal The national bird of Nepal (where it is called a "danphe") has an pretty ponytail of iridescent feathers. Nicobar pigeon Eurasian hoopoe

The Art of Bonsai Project - Home Junk You'd Normally Throw Away Transformed Into Genius Ideas 1.) Old hubcaps shouldn’t go to a junk yard. 2.) Pop tab? More like pop FAB. 3.) 4.) 5.) 6.) 7.) 8.) 9.) 10.) 11.) 12.) 13.) 14.) 15.) 16.) 17.) 18.) 19.) 20.) 21.) 22.) 23.) 24.) 25.) 26.) 27.) 28.) How to Keep Water Clear in Fountains and Ponds, Barley: Gardener's Supply To keep ponds clear, it's best to begin treatment early in the season before problems arise. All gardeners want to be green — except when it comes to water. Whether you have a fountain, pond or a small reflecting pool, chances are good that at some point you'll have to deal with nuisance algae. Mother Nature has a way of colonizing just about any watery habitat with algae — even a birdbath. Small amounts of algae may be a simple annoyance, discoloring containers with a film of green slime. The best method for reducing algae growth depends on the size and type of the water feature, the time of year and the extent of the problem, as well as aesthetics and convenience. Fountains Here are a few options for keeping water clear: Container Water Gardens and Small Ponds Small-scale water features can be havens for unchecked algae growth. Large Ponds Product Details

8 Vegetables That You Can Regrow Again And Again Have you ever wondered which vegetables you can regrow or how to regrow them? Below are eight vegetables that you can regrow again and again. Scallions You can regrow scallions by leaving an inch attached to the roots and place them in a small glass with a little water in a well-lit room. wearenotfoodies.com Garlic When garlic begins to sprout, you can put them in a glass with a little water and grow garlic sprouts. nancyengedesign.wordpress.com Bok Choy Bok choy can be regrown by placing the root end in water in a well-lit area. makesmemine.blogspot.com Carrots Put carrot tops in a dish with a little water. projectfidgetyfingers.blogspot.com Basil Put clippings from basil with 3 to 4-inch stems in a glass of water and place it in direct sunlight. thateverydaygirl.com Celery Cut off the base of the celery and place it in a saucer or shallow bowl of warm water in the sun. infusionfibers.wordpress.com Romaine Lettuce Put romaine lettuce stumps in a 1/2 inch of water. fastcheapandgood.blogspot.com

We Do Things Different Here in Texas: How to remove a stump in 2 - 3 days instead of 2 - 3 years (Let me begin by saying this blog post has taken on a life of it's own. It has been sited more times than I have even attempted to count. I've gotten weekly reports for the past 3 1/2 years that it has been up, of all the times it has been viewed. First, know that I was desperate to get this stump down to ground level, below the level of my grow boxes. It was right where the box was intended to go. I was already growing some of the most expensive produce in the world and was not anxious to spend an additional $75 to hire a man with a stump grinder. This stump was in the corner of my garden bed. Last Wednesday, I decided to really apply the charcoal burn out method. February 6, 2014 - There has been a remarkable amount of interest in this post.