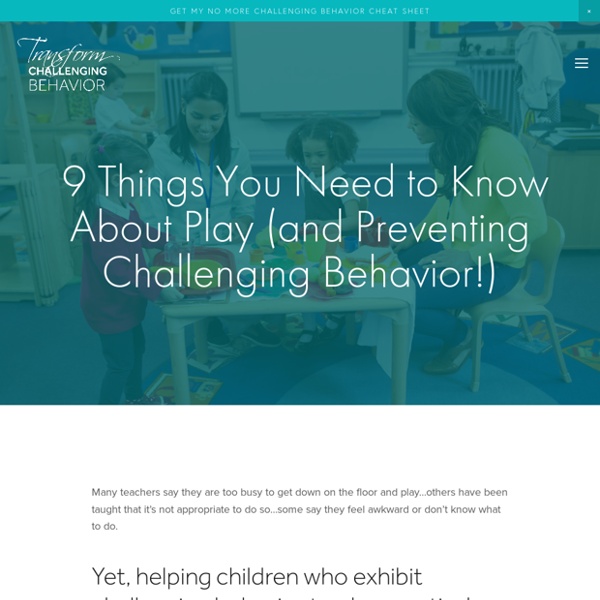 Over and over again I’ve seen examples of intentional support for a child’s play result in language spurts, increased attention span, social skills, friendships formed, and dramatic reductions or the elimination of the challenging behavior…sometimes even when the behavior was occurring at other times of the day. Curious? Read on… 1. Children need 45-60 consecutive minutes of play time per day. Play takes time. 2. If we want children to control their impulses, follow the rules and routines of our classrooms, and be nice to others then play needs to be at the center of the curriculum. 3. For some children developing the skills to form friendships and to play cooperatively with peers does not come naturally. 4. Typically we see children engaging in cooperative pretend play by the end of the preschool years. 5. Well, you can if you want to, but I strongly recommend against this. 6. 7. Yes. Thankfully, the early childhood guidelines in many states have similar guidelines. 8. 9.

Schema and Fairies - Kathy Brodie Early Years Training Schemas are one of those things that divide practitioners, like fairies at the bottom of the garden. You either believe in them and are in absolute awe at how amazing they are, or you just don’t believe they exist. It’s really interesting when you discuss this with people and it’s extra exciting when a ‘non-believer’ suddenly says “That describes my key child exactly!!” But first of all, let’s explore what a schema is. How can parents and teachers best educate young children? What principles can both teachers and parents bring to the education of very young children? Gillian Craig, who was part of the Learning Time with Shaun and Timmy writing team, explains. As teachers and parents, we follow certain principles in our roles. Often though, these principles overlap and all we need to do is recognise and reinforce these areas. Ask (the right) questions When my daughter came out of her class one day shortly after her course started, I asked her, 'What did you do in class today?'.

5 Ways to Prevent Challenging Behavior with a "Sensory- Seeking" Child with a Short Attention Span — Challenging Behavior Let’s think about how we can build on his interest in water and build on the fact that water play seems to self-regulate him. These ideas can be adapted for any child who moves rapidly from one activity to the next and who seems to be "sensory seeking," meaning they seek out sensory experiences such as playing with water, sand, or glue. Or, who consistently crash their trike into the wall or push into other children, seemingly for no reason. Here are some thoughts and suggestions: 1.

Importance of play for babies & children Australian Government Department of Education and Training (2009). Belonging, being and becoming: The early years learning framework for Australia. Canberra: Commonwealth of Australia. Retrieved 19 June 2019 from Cole-Hamilton, I. (2011). Being Multilingual: You speak with an accent. I don’t. Accents are things that only other people have. They are, by extension, things that you don’t want to have. Accents are, in short, shortcomings. This is why, if someone tells you that “you speak with no accent”, you can be sure of two things: that you have received words of praise indeed; and that you speak with the same accent as that person. So the person is actually not only praising her own accent, she is also giving evidence that she has no idea she’s got one.

"I Said I Want the Red Bowl!" Responding to… Amelia, told that she can’t have a fifth book before bedtime, shouts: “You are the meanest mommy! You are not invited to my birthday party!” Derek, when offered a choice between carrots and cheese, not ice cream, before dinner announces: “I don’t like the choices you are choicing me!” Alex hurls a bowl of his favorite cereal off the table and screams, “I said the red bowl, not the blue bowl!” If any of these exclamations sounds familiar, you are not alone.

How young children learn English through play As we release Learning Time with Timmy – our first app for early-years learners of English – Danitza Villarroel, a teacher on our Learning Time with Shaun and Timmy course in Chile, explains the importance of learning through play, and offers a few tips for teachers new to this age group. Teaching English to pre-school children can be daunting for teachers new to this age group. Young children have shorter attention spans than older children and adults, and they're still learning their mother tongue. But teaching these learners can be enormously rewarding once you've taken a few basic principles on board. The importance of active learning How Are Happiness and Learning Connected? As teachers, we also know that when students' affective filters or defenses are sky high, fight or flight responses will be modus operandi. A room full of defensive behaviors (withdrawn, angry) is a sad, unproductive place to teach and learn. Now let's flip it and take a look at how much more we are able to learn when we are in harmony with the people and things in any given educational environment.

One Person–One Language and Bilingual Children A well-known approach used with children who are acquiring two languages simultaneously is for each parent to use his or her own language with their child. Thus, for example, parent 1 will use Spanish and parent 2 English. This is known as the one person­–one language strategy or OPOL. Sound Words: Examples of Onomatopoeia Onomatopoeia is a fun, linguistic tool used in literature, songs and advertisements. Now that you've seen examples of the individual words, consider the following examples of onomatopoeia words in use. Take a look at the different onomatopoeia examples in Todd Rundgren's song, appropriately named Onomatopoeia. "Onomatopoeia every time I see yaMy senses tell me hubbaAnd I just can't disagree.I get a feeling in my heart that I can't describe. . .It's sort of whack, whir, wheeze, whineSputter, splat, squirt, scrapeClink, clank, clunk, clatterCrash, bang, beep, buzzRing, rip, roar, retchTwang, toot, tinkle, thudPop, plop, plunk, powSnort, snuck, sniff, smackScreech, splash, squish, squeakJingle, rattle, squeal, boingHonk, hoot, hack, belch."