Reed.co.uk : where the right job looks for you 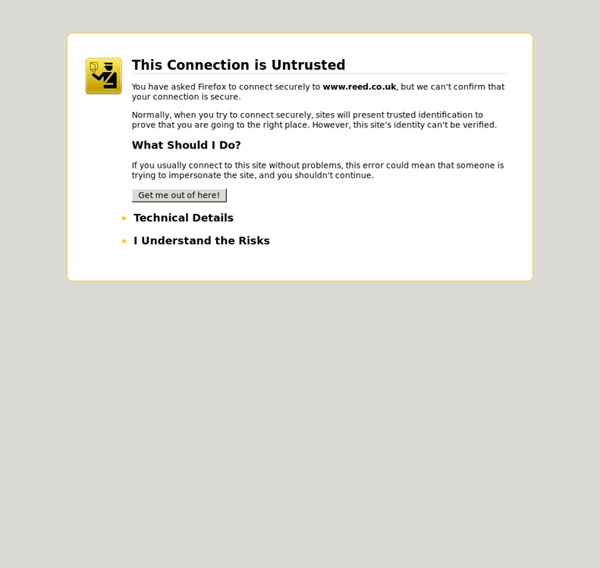 Washington City Paper: Cover Story: Doing More With Less When the federal economic stimulus package hit the news in January, my latest run on unemployment was just going dry, and the mere prospect of getting another job was enough to make my testicles retract into my body. When reports surfaced that a three- or six-month (!!) unemployment extension was going to be part of the package, it seemed like government was finally doing something for the little guy, instead of just the fat cats and whiny Christians. I spent the next two weeks Google News-ing “unemployment extension economic stimulus” every 10 minutes. When the package including the extension failed by one vote, I was so fucking pissed at the United States government that if an al-Qaeda recruiter had pitched me at that moment, I’d be in the Afghanistan desert as we speak, screaming Arabic at the top of my lungs while bayoneting an Uncle Sam mannequin. I’ve been on unemployment three times in the past six years. advertisement Second of all, it’s really my money in the first place.

Top 10 Quotes Against Work - Top 10 - Work Quotes - Quotes About Work - Charles Bukowski Quotes - Factotum - American Beauty - William Faulkner Quotes - American Movie - Aldous Huxley Quotes - Fight Club - Oscar Wilde Quotes - Goodfellas - Henry Top 10 Quotes Against Work “It was true that I didn’t have much ambition, but there ought to be a place for people without ambition, I mean a better place than the one usually reserved. How in the hell could a man enjoy being awakened at 6:30 a.m. by an alarm clock, leap out of bed, dress, force-feed, shit, piss, brush teeth and hair, and fight traffic to get to a place where essentially you made lots of money for somebody else and were asked to be grateful for the opportunity to do so?” —Charles Bukowski, Factotum, Black Sparrow Press, 1975 "My job consists of basically masking my contempt for the assholes in charge, and, at least once a day, retiring to the men's room so I can jerk off while I fantasize about a life that doesn't so closely resemble Hell." —American Beauty, 1999 "One of the saddest things is that the only thing that a man can do for eight hours a day, day after day, is work. "I was called to the bathroom at the cemetery to take care of something.