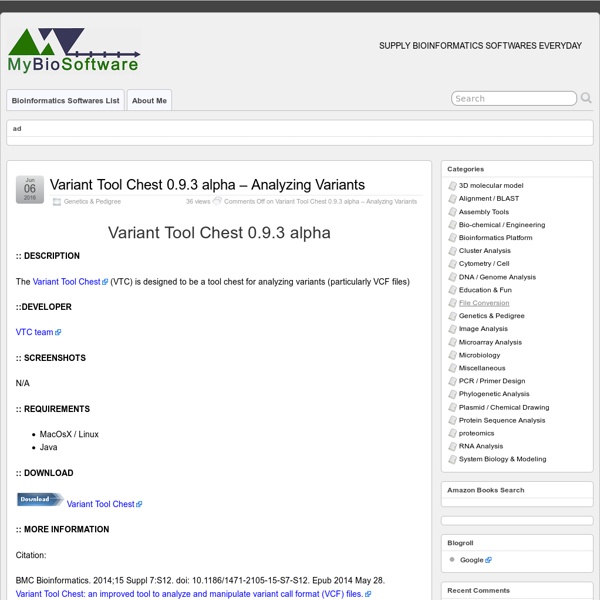 eteRNA - RNA Game Lets Players Help Find a Biological Prize By playing EteRNA, you will participate in creating the first large-scale library of synthetic RNA designs. Your efforts will help reveal new principles for designing RNA-based switches and nanomachines — new systems for seeking and eventually controlling living cells and disease-causing viruses. By interacting with thousands of players and learning from real experimental feedback, you will be pioneering a completely new way to do science. the Das Lab Web BrowserFlash An RNA Aptamer Provides a Novel Approach for the Induction of Apoptosis by Targeting the HPV16 E7 Oncoprotein Abstract Background Human papillomavirus 16 (HPV16) is a high-risk DNA tumour virus, which is a major causative agent of cervical cancer. Cellular transformation is associated with deregulated expression of the E6 and E7 oncogenes. E7 has been shown to bind a number of cellular proteins, including the cell cycle control protein pRb.

BRAGI 20091106 - A Protein Visualization and Modeling Program BRAGI is a well-established package for viewing and modeling of three-dimensional (3D) structures of biological macromolecules.BRAGI enables you to view and explore the three-dimensional (3D) structure of any macromolecule. You can explore proteins, DNA, RNA, carbohydrates, and complexes, such as between transcriptional regulatory proteins and DNA, or enzymes and drugs. BRAGI Team Windows / Linux Citation BRAGI: linking and visualization of database information in a 3D viewer and modeling tool. Researchers develop RNA aptamers that inhibit HCV replication Published on June 3, 2013 at 12:46 AM Treatments against hepatitis C virus have only been partially successful. A major problem is that antivirals generate drug resistance. Now Seong-Wook Lee of Dankook University, Yongin, Republic of Korea and his collaborators have developed agents that bind to the business end of a critical protein, disabling it so successfully that no resistance has arisen.

The Inhibition of Stat5 by a Peptide Aptamer Ligand Specific for the DNA Binding Domain Prevents Target Gene Transactivation and the Growth of Breast and Prostate Tumor Cells Open AccessThis article isfreely availablere-usable Article 1 Georg-Speyer-Haus, Institute for Biomedical Research, Frankfurt am Main 60596, Germany 2 Ganymed Pharmaceuticals AG, Mainz 55131, Germany 3 Boston Children's Hospital, Division of Hematology/Oncology, Boston MA 02115, USA 4 Ludwig Boltzmann Institute for Cancer Research (LBI-CR), Vienna 1090, Austria * Author to whom correspondence should be addressed. MicroRNA and Breast Cancer: Understanding Pathogenesis, Improving Management The advent of the microRNAs in the early 1990s has proven to be a tremendously significant development within the purview of gene regulation. They participate in the regulation of a broad assembly of processes vital to proper cell function and the perturbation of these pathways following alteration of miRNA expression is strongly believed to contribute to the pathogenesis of cancer. This review provides a comprehensive overview of the miRNAs that have to date been well-characterized in the context of human breast neoplasia.

Caryoscope 0.4.0 - View Gene Expression Data in Genome Caryoscope is an application for viewing gene expression data in a whole-genome context. Caryoscope has been used to “draw” microarray data onto a set of chromosomes so that changes in DNA copy number can identify regions of chromosome loss or duplication within the genome of tumor cells (Nat Genet. 1999 Sep;23(1):41-6). In addition, microarray data measuring mRNA expression levels can also be visualized in a genomic context using Caryoscope (PNAS 2002 Dec 10;99(25):16144-9). Data viewed with Caryscope need not be limited to microarray data — any type of numerical data that can be represented as a function of genomic position can be visualized using Caryoscope. Ihab A.B.

RLooM - RNA Loop Modeling RLooM is a web application for homology-based modeling of RNA loops utilizing template structures extracted from the PDB. RLooM allows the insertion and replacement of loop structures of a desired sequence into an existing RNA structure. Furthermore, a comprehensive database of loops in RNA structures can be accessed through the web interface.