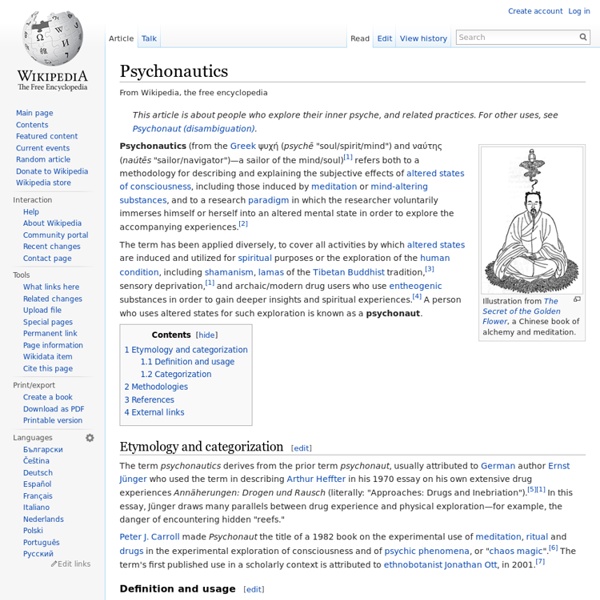 Psychonautics (from the Greek ψυχή (psychē "soul/spirit/mind") and ναύτης (naútēs "sailor/navigator")—a sailor of the mind/soul)[1] refers both to a methodology for describing and explaining the subjective effects of altered states of consciousness, including those induced by meditation or mind-altering substances, and to a research paradigm in which the researcher voluntarily immerses himself or herself into an altered mental state in order to explore the accompanying experiences.[2] The term has been applied diversely, to cover all activities by which altered states are induced and utilized for spiritual purposes or the exploration of the human condition, including shamanism, lamas of the Tibetan Buddhist tradition,[3] sensory deprivation,[1] and archaic/modern drug users who use entheogenic substances in order to gain deeper insights and spiritual experiences.[4] A person who uses altered states for such exploration is known as a psychonaut. Etymology and categorization[edit] Peter J. Related:  Psychonautica

Whole Systems This area is devoted to the study of whole systems. Nature is a whole system. But also an economy, a family, a company, a community, or many other things, can be looked at as whole systems. A whole system view would include all the factors involved and examine how they relate to each other and how they work as a whole. Whole systems are dynamic, they change they move, they develop. There is no one authority in the field of whole systems. There is a Whole Systems mailing list for the exploration of whole systems principles, particularly in regards to economic, ecological, sociological and metaphysical transformation of our civilization. 4/24/2004: Note that this page has not been actively updated for a long time. Subjects and Disciplines Whole Systems Design Networking - (50+) The Networking Institute. Learning Organizations (100+) Mind Mapping Total Quality Management, Kaizen home page Holographic Universe Holonomics Cybernetics and Systems Theory - (200+) Principia Cybernetica General Semantics

Psychedelic Medicine News - reliable information on psychedelics improving human health The Psychedelic Library Access the North American Mirror Site Alas! the forbidden fruits were eaten, And thereby the warm life of reason congealed. A grain of wheat eclipsed the sun of Adam, Like as the Dragon's tail dulls the brightness of the moon. — Rumi: Masnavi I Ma'navi The files in this library are transmitted under the "Fair Use" rulingsregarding the 1976 Copyright Act for NON-profit academic, research, and general information purposes.

Alan Watts - Inception Rites Of Passage (enlarge) Written by Wilbert Alix Rites Of Passage: any ritual or ceremony wherein a participant crosses a threshold demarcating a transformation of their state of being. Rites Of Passage is a holistic, spiritual model based on an inevitable journey that all humans go through in a lifetime. Humanity is in a constant search to discover a truth that can explain the nature of our existence. We live in a contemporary culture. The Circle The three great religions of the west (Judism, Islam and Chrisianity) speak of a religious model based on the principles of a straight line. 4. 5. 6. 7. 8. 9. 10. 11. 12. Jupiter: Gatekeeper of expansion and personal belief systems. Uranus: Ally of liberation and authenticity. Chiron: Ambassador to the galaxy. Neptune: Remembering your visions and dreams. Rites Of Passage (Shamanic) Stages and Planetary Cycles Jupiter Return • Initiation into and establishment of core belief system; beginning to think for yourself. Sexual Initiation (approx age 21) © Wilbert Alix

8 animals who love to get stoned off their tiny, adorable faces 8 animals who love to get stoned off their tiny, adorable faces Humans aren’t the only animals that like to over-indulge. In fact, perhaps we’re one of the more sober species, which is quite the comfort as we’re still nursing slightly tender heads from New Year’s Eve. 1. Dolphins huff pufferfish An addict with his fix The real reason they’re so willing to swim with fat tourists and hippies has been revealed: dolphins like to get high on pufferfish. When a pufferfish is scared it ejects toxins, meant to injure its foe. Source: Smithsonian magazine 2. A spate of mysterious crop circles that appeared in Australian poppy fields would have even fellow opium fiend Sherlock Holmes shaking his head. "We have a problem with wallabies entering poppy fields, getting as high as a kite and going around in circles," said Lara Giddings, the attorney general for the island state of Tasmania. Source: BBC 3. The war on drugs would be so much easier if you had to bite the heads off one of these first 4. 5. 6.

Erowid Alan watts ~ Philosophy of war Lightshow - Tutorials The crystal slides tutorial is a set of instructions describing how to create a really beautiful psychedelic special effect. If you are interested in other light show lumia effects and how they are produced, the best way to learn the basic techniques is to look at the collection of patents I have on the pioneers page. The neon wire tutorial requires Corel Photopaint or Adobe Photoshop. Free The Flash Warp fla shows how to create some cool flash special effects using Flash 4, Flash 5, or Flash MX.

Nitrous Oxide FAQ Drug Use Amongst Philosophers and Artists - The Phora Consider the following passage, from Jean-Paul Sartre's 1960 existentialist blockbuster "The Critique of Dialectical Reason": Quote: There are a number of valid responses to these arguments. One might be: They sure don't make public intellectuals like they used to. It's a good question. We hear a lot these days about drug abuse, but there is also such a thing as drug use—a utilitarian attitude to our body chemistry in which drugs are simply aids to productivity. Notes from the Psychedelic Salon - podcasts Guest speaker: Terence McKennaListen Download Subscribe MP3 Free PCs – Right click, select option Macs – Ctrl-Click, select option Terence McKenna [NOTE: All quotations are by Terence McKenna.] “A psychedelic point of view means a point of view which honors consciousness.” “You do not measure the depth of a universal mystery with the neural network of a primate.” “Our role is not to understand but to appreciate.” “It’s ridiculous to attempt to seize the tiller of reality, because we don’t even know where we want to go.”J “We extract the poetry from being by the assumption of the mundane.” “Once nature is taken as the ground of being then permission to inflate the image of the ego is denied.” “Intuition must be given prominence in the rearrangement of our relationship with the world.” “Science is really the, it’s the plumbing level of reality. “Intuition is the unifying of experience into a gestalt image of the world.”