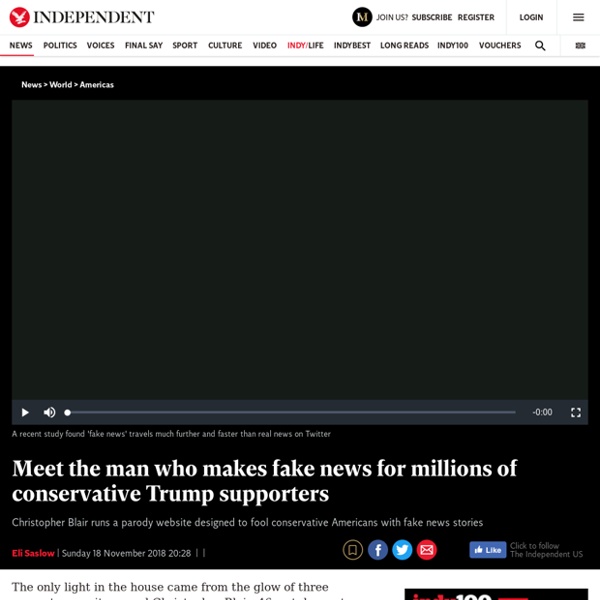 The only light in the house came from the glow of three computer monitors, and Christopher Blair, 46, sat down at a keyboard and started to type. His wife had left for work and his children were on their way to school, but waiting online was his other community, an unreality where nothing was exactly as it seemed. He logged onto his website and began to invent his first news story of the day. "BREAKING," he wrote, pecking out each letter with his index fingers as he considered the possibilities. Maybe he would announce Hillary Clinton had died during a secret overseas mission to smuggle more refugees into America. Maybe he would award President Donald Trump the Nobel Peace Prize for his courage in denying climate change. A new message popped onto Blair's screen from a friend who helped with his website. Join Independent Minds For exclusive articles, events and an advertising-free read for just £5.99 €6.99 $9.99 a month Get the best of The Independent "Good morning, Shirley! "Gross.

Related:  How to Think Critically. Fake News • What the Hell • Alternate Truth

The 12 cognitive biases that prevent you from being rational The human brain is capable of 1016 processes per second, which makes it far more powerful than any computer currently in existence. But that doesn't mean our brains don't have major limitations. The lowly calculator can do math thousands of times better than we can, and our memories are often less than useless — plus, we're subject to cognitive biases, those annoying glitches in our thinking that cause us to make questionable decisions and reach erroneous conclusions. Here are a dozen of the most common and pernicious cognitive biases that you need to know about. Before we start, it's important to distinguish between cognitive biases and logical fallacies.

The DEA and ICE are hiding surveillance cameras in streetlights The US Drug Enforcement Administration (DEA) and Immigration and Customs Enforcement (ICE) have hidden an undisclosed number of covert surveillance cameras inside streetlights around the country, federal contracting documents reveal. According to government procurement data, the DEA has paid a Houston, Texas company called Cowboy Streetlight Concealments LLC roughly $22,000 since June 2018 for “video recording and reproducing equipment.” ICE paid out about $28,000 to Cowboy Streetlight Concealments over the same period of time. It’s unclear where the DEA and ICE streetlight cameras have been installed, or where the next deployments will take place.

Evaluating Sources in a ‘Post-Truth’ World Back in 2015, when we published our lesson plan Fake News vs. Real News: Determining the Reliability of Sources, we had no way of knowing that, a year later, the Oxford Dictionaries would declare “post-truth” the 2016 word of the year; that fake news would play a role in the 2016 presidential election; that it would cause real violence; and that the president-elect of the United States would use the term to condemn mainstream media outlets he opposes. Back then, to convince teachers that the skill was important, we quoted Peter Adams of the News Literacy Project on the “digital naïveté” of the “digital natives” we teach. Now, however, we doubt that we need to convince anyone. These days, invented stories created in a “fake news factory”— or by a 23-year-old in need of cash — go viral, while articles from traditional sources like The Times are called “fake news” by those who see them as hostile to their agenda.

Is NASA Planning to Geoengineer Yellowstone’s Supervolcano Threat Away? Despite repeatedly claiming that the Yellowstone caldera does not pose a super-eruption risk in our lifetimes, NASA has admitted the threat is real and is working to geoengineer a solution to negate that risk. In the realm of of science-based clickbait, no topic is more reliable for delivering page views and social media shares than claims that the pool of magma sitting below Yellowstone National Park is about to erupt in a humanity-ending cataclysm. As we have repeatedly, exhaustingly, and redundantly reported, the likelihood of that mega-disaster’s occurring in the next couple of thousand years is extremely low, and the region is monitored continuously for threatening activity which would provide ample warning if that situation were to change for some currently unknown reason.

60 Environmental Rules on the Way Out Under Trump 1. Revoked Obama-era flood standards for federal infrastructure projects This Obama-era rule, revoked by Mr. Trump in August, required that federal agencies protect new infrastructure projects by building to higher flood standards. Building trade groups and many Republican lawmakers opposed it as costly and burdensome. 2. 1/1/17: How to Convince Someone When Facts Fail Have you ever noticed that when you present people with facts that are contrary to their deepest held beliefs they always change their minds? Me neither. In fact, people seem to double down on their beliefs in the teeth of overwhelming evidence against them. The reason is related to the worldview perceived to be under threat by the conflicting data. Creationists, for example, dispute the evidence for evolution in fossils and DNA because they are concerned about secular forces encroaching on religious faith.

Media Bias Chart, 3.1 Minor Updates Based on Constructive Feedback - ad fontes media So why is it time for another update to the Media Bias Chart? I’m a strong believer in changing one’s mind based on new information. That’s how we learn anyway, and I wish people would do it more often. I think it would lead to nicer online discussions and less polarization in our politics. Trump prophecy and other Christian movements: 3 essential reads A new film, “Trump Prophecy,” will be shown in some limited theaters on Oct. 2 and 4. The film is an adaptation of a book, co-authored by Mark Taylor, a retired firefighter, who claimed he received a message from God in 2011 that the Trump presidency is divinely ordained. Liberty University film students are reported to have participated in the making of the film.

Fake news websites in the United States Fake news websites in the United States are fake news websites that deliberately publish fake news, but specifically target American audiences by creating or inflaming controversial topics such as the 2016 election.[1][2] Most fake news websites target readers by impersonating or pretending to be real news organizations,[3] which can lead to legitimate news organizations further spreading their message.[4] Most notable in the media are the many websites that made completely false claims about political candidates usually focusing on Hillary Clinton and President Donald Trump,[5] as part of a larger campaign to gain viewers and ad revenue or spread disinformation.[6] Additionally, satire websites have received criticism for not properly notifying readers that they are publishing false or satirical content, since many readers have been duped by seemingly legitimate articles.[7][8] Definition[edit] Methods[edit] Clickbait[edit]

Related:
Related:  How to Think Critically. Fake News   -  What the Hell   -  Alternate Truth