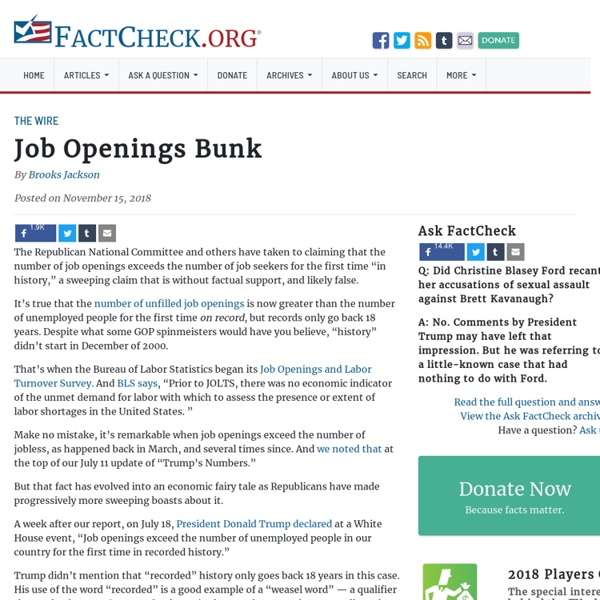 The Republican National Committee and others have taken to claiming that the number of job openings exceeds the number of job seekers for the first time “in history,” a sweeping claim that is without factual support, and likely false. It’s true that the number of unfilled job openings is now greater than the number of unemployed people for the first time on record, but records only go back 18 years. Despite what some GOP spinmeisters would have you believe, “history” didn’t start in December of 2000. That’s when the Bureau of Labor Statistics began its Job Openings and Labor Turnover Survey. And BLS says, “Prior to JOLTS, there was no economic indicator of the unmet demand for labor with which to assess the presence or extent of labor shortages in the United States. ” Make no mistake, it’s remarkable when job openings exceed the number of jobless, as happened back in March, and several times since. Trump didn’t mention that “recorded” history only goes back 18 years in this case.

In the Age of A.I., Is Seeing Still Believing? In 2011, Hany Farid, a photo-forensics expert, received an e-mail from a bereaved father. Three years earlier, the man’s son had found himself on the side of the road with a car that wouldn’t start. When some strangers offered him a lift, he accepted. A few minutes later, for unknown reasons, they shot him. Trump Jr.'s False Noncitizen Voting Tweet Amid a contentious Florida recount, Donald Trump Jr. tweeted a six-year-old, and outdated, story to suggest hundreds of thousands of noncitizens could have voted in the state. The story includes an update saying just 85 noncitizens were ultimately removed from the state’s voter rolls in 2012. On Nov. 12, Trump Jr. tweeted the “Amazing, but not shocking at all anymore” headline from an NBC Miami story that said, “Nearly 200,000 Florida Voters May Not Be Citizens.” But an editor’s note posted to the top of the story before he tweeted about it made clear that the figure from state officials turned out to be deeply flawed.

Macron condemned the rise of nationalism in front of Trump and Putin, warning that 'old demons are reawakening' PARIS (Reuters) - French President Emmanuel Macron used an address to world leaders gathered in Paris for Armistice commemorations on Sunday to send a stern message about the dangers of nationalism, calling it a betrayal of moral values. With US President Donald Trump and Russian President Vladimir Putin sitting just a few feet away listening to the speech via translation earpieces, Macron denounced those who evoke nationalist sentiment to disadvantage others. "Patriotism is the exact opposite of nationalism: nationalism is a betrayal of patriotism," Macron said in a 20-minute address delivered from under the Arc de Triomphe to mark the 100th anniversary of the end of World War One.

Study: Religious fundamentalists and dogmatic individuals are more likely to believe fake news New research provides evidence that delusion-prone individuals, dogmatic individuals, and religious fundamentalists are more likely to believe fake news. The study, which appears in the Journal of Applied Research in Memory and Cognition, suggests that the inability to detect false information is related to a failure to be actively open-minded. The rise of online social media has led to growing concerns about the spread of unsubstantiated rumors, misleading political propaganda, and blatantly false articles designed to create viral web traffic. Even the U.S. Army has become involved in efforts to understand and combat disinformation in cyberspace.

Trump said he has 'no financial interests in Saudi Arabia.' But his businesses have made millions from the Saudi government, and the crown prince gave his New York City hotel a huge boost. In a statement released Tuesday, President Donald Trump stood by Saudi Arabia and Crown Prince Mohammed bin Salman despite evidence that the crown prince ordered the killing of Saudi journalist Jamal Khashoggi. "King Salman and Crown Prince Mohammad bin Salman vigorously deny any knowledge of the planning or execution of the murder of Mr. Khashoggi," Trump said. "Our intelligence agencies continue to assess all information, but it could very well be that the Crown Prince had knowledge of this tragic event — maybe he did and maybe he didn't!"

Fact-checking misinformation about the migrant caravan Misinformation about a migrant caravan heading to the United States is spreading on Facebook and other social media platforms with users sharing false or misleading memes and posts that paint a skewed version of the facts. PolitiFact has fact-checked many of those claims. A hurricane about to strike the caravan? False. That viral image purportedly showing caravan migrants on top of a train? False. Do Uncancelled Stamps Prove Mail Bombs Were Not Sent Through the USPS? The lack of postmarks on explosive devices mailed to Democratic officials proves those items were not sent through the USPS. In October 2018, multiple parcels housing mail bombs were sent to various Democrats and critics of President Trump, including the Clintons, the Obamas, Joe Biden, George Soros, and actor Robert de Niro. According to various accounts, the packages included “explosive devices made from PVC pipe and contained a timer (likely a digital alarm clock) to set off the detonator. The powder contained in the bombs comes from pyrotechnics.

Donald Trump's Pants on Fire claim that Democrats let a cop-killing immigrant into the country In his final push before the midterms, President Donald Trump promoted a political video that says Democrats are responsible for letting a murderer stay in the country illegally to kill people. Trump tweeted a campaign-style video Oct. 31 about two California sheriff officers who were shot to death by an immigrant in the country illegally. The video opens with courtroom footage of a smiling Luis Bracamontes. Superimposed are the words, "Illegal immigrant, Luis Bracamontes, killed our people!" As Bracamontes boasts about killing the two officers and saying he would kill more if he could, new text says, "Democrats let him into our country."

Trump Engaged in Suspect Tax Schemes as He Reaped Riches From His Father President Trump participated in dubious tax schemes during the 1990s, including instances of outright fraud, that greatly increased the fortune he received from his parents, an investigation by The New York Times has found. Mr. Trump won the presidency proclaiming himself a self-made billionaire, and he has long insisted that his father, the legendary New York City builder Fred C. Trump, provided almost no financial help. But The Times’s investigation, based on a vast trove of confidential tax returns and financial records, reveals that Mr.

Does This Video Show a Man Ripping the MAGA Hat Off a Trump Supporter? A video shows a white man ripping the “MAGA” hat off the head of a black Trump supporter in a Starbucks. On 25 October 2018, the Instagram account “funny__marco_” shared a video that purported to show an altercation in a Starbucks between a black man wearing a Make America Great Again (MAGA) hat and a white man who ripped it off his head in anger: The video was captioned, like so many others of its time, with a call for fans to follow a YouTube channel — a channel featuring many other bits of staged, awkward, or humorous confrontations. This similarity lead many (but not enough) people to correctly surmise it was a staged video produced for some sort of comedic value.

Trump Stump Speeches: Immigration Editor’s Note: For weeks, President Donald Trump has been campaigning in states that are key to the Republican Party’s chances of maintaining control of the House and Senate. We have reviewed seven speeches he gave from Oct. 10 to Oct. 22. This is the first in a series of stories on his speeches. President Donald Trump is trying to make illegal immigration a key issue in the midterm elections. In Montana, which borders Canada, Trump tells supporters that “it’s going to be an election of the caravan,” referring to the several thousand Central American emigrants who are traveling to Mexico and the U.S. in search of refugee status.

4 Ways Fred Trump Made Donald Trump and His Siblings Rich In Donald J. Trump’s version of how he got rich, he was the master dealmaker who parlayed an initial $1 million loan from his father into a $10 billion empire. It was his guts and gumption that overcame setbacks, and his father, Fred C. Trump, was simply a cheerleader. eu.usatoday WASHINGTON – The Senate released Monday a pair of reports that found Russia engaged in an all-out social media campaign on Donald Trump's behalf during the 2016 election and continued to support him after he took office. One report, compiled by Oxford University’s Computational Propaganda Project and a social media analysis firm called Graphika, looked at millions of posts on every popular social media platform from Facebook to Pinterest that were provided to the Senate and House Intelligence Committees. The second report – written by New Knowledge, a cybersecurity firm specializing in protection from "social media disinformation attacks" – found that in addition to a "sweeping and sustained social influence operation," the Russians also tried to hack online voting systems and stole Clinton campaign emails, "which led to a controlled leak via Wikileaks." The campaign had two strategies, the report said.