Beautiful Minds: The Psychology of the Savant 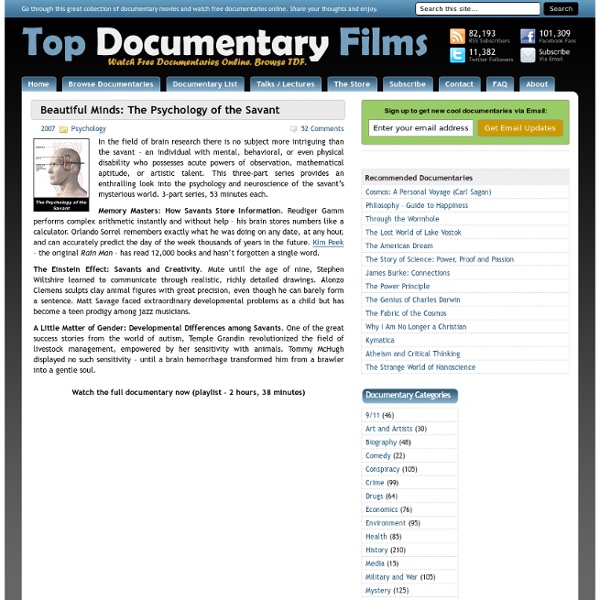 In the field of brain research there is no subject more intriguing than the savant - an individual with mental, behavioral, or even physical disability who possesses acute powers of observation, mathematical aptitude, or artistic talent. This three-part series provides an enthralling look into the psychology and neuroscience of the savant’s mysterious world. 3-part series, 53 minutes each. Memory Masters: How Savants Store Information. Reudiger Gamm performs complex arithmetic instantly and without help - his brain stores numbers like a calculator. The Einstein Effect: Savants and Creativity. A Little Matter of Gender: Developmental Differences among Savants. Watch the full documentary now (playlist - 2 hours, 38 minutes)

Capital - Why you don't want your child to be a genius Alina Adams’ 12-year-old son, Gregory, has a gift. He is passionate about computer programming and exceptionally good at it, with talents that belie his young age. When he was 10, he was accepted into a prestigious programming course at a university, but then told he was too young to attend. “So he got mad and he built his own website where everyone can learn how to code, whatever age they are,” said Adams, 46, who lives in New York City. As Gregory has gotten older, funding his interest has gotten more expensive. “Some of the things he wants to develop now require hardware,” Adams said, “and that costs money.” Then there’s the price of travel and events. Gregory pointed out that the UK conference had satellite events in various countries — and asked if they could have one in New York. Meanwhile, Adams keeps things in perspective. Of course, many parents think their children are exceptional. Do it now: Set a budget. Think about what you want. Cultivate on a small scale.

Why talent is overrated - Oct. 21, 2008 (Fortune Magazine) -- It is mid-1978, and we are inside the giant Procter & Gamble headquarters in Cincinnati, looking into a cubicle shared by a pair of 22-year-old men, fresh out of college. Their assignment is to sell Duncan Hines brownie mix, but they spend a lot of their time just rewriting memos. They are clearly smart - one has just graduated from Harvard, the other from Dartmouth - but that doesn't distinguish them from a slew of other new hires at P&G. What does distinguish them from many of the young go-getters the company takes on each year is that neither man is particularly filled with ambition. These two young men are of interest to us now for only one reason: They are Jeffrey Immelt and Steven Ballmer, who before age 50 would become CEOs of two of the world's most valuable corporations, General Electric (GE, Fortune 500) and Microsoft (MSFT, Fortune 500). The obvious question is how. If we're all wrong about high achievement, that's a big problem.

What the McLean brain bank malfunction means for autism research | Simon Baron-Cohen The sensitivities of organ donation mean that brain banks' tissue collections take years of patient effort to acquire. Photograph: Graeme Robertson for the Guardian This week, the freezer at the Harvard-affiliated McLean Hospital broke down, with the loss of about 150 brain samples from people who had died and who had had conditions such as autism, Parkinson's disease, Alzheimer's disease, or schizophrenia. This is bad news for at least five different communities. First, there are the families of the bereaved individuals who had to make the very difficult decision about whether to donate their loved one's brain for research, hoping that such a donation would result in scientific advance in our understanding of the causes of a condition like autism. For some relatives, such a decision will have meant wrestling with their own religious beliefs, or with their own strongly-held emotions and wishes about how their relative should be treated.

Welcome to The Belin Blank Center - College of Education - University of Iowa The Belin-Blank International Center for Gifted Education and Talent Development (B-BC) is a comprehensive center focused on nurturing potential and inspiring excellence through myriad programs and services. Educators can earn the Iowa Gifted Education Endorsement and advance their knowledge through our professional development courses and workshops. Students can benefit from programming year-round with the Iowa Online Advanced Placement Academy and academic-year and summer programs. The Illusion of Understanding Success 0Share Synopsis Our tendency to rely on narratives to explain the world distorts our understanding of what it takes to be successful. In December of 1993, J.K. By 1995 she finished the first manuscript of Harry Potter and the Philosopher’s Stone, a story about a young wizard she began writing years before. Rowling’s story, which includes financial and emotional shortcomings followed by success and popularity, is the rags to riches narrative in a nutshell. The reality of Rowling’s story, however, is just that: it’s a story. Yet, we humans, facing limits of knowledge, to paraphrase one author, resolve the myriad of unknown events that defined Rowling’s life before Harry Potter by squeezing them into crisp commoditized ideas and packaging them to fit a warming narrative. The same problem occurs in science. Unfortunately, Frodo’s triumph at Mount Doom is more real than natural selection to some. Tags: creativity, intelligence, philosophy, psychology, success

Emotionally neglected children more likely to suffer strokes in old age By Daily Mail Reporter Published: 20:00 GMT, 19 September 2012 | Updated: 20:00 GMT, 19 September 2012 How children are treated when they are young can affect their future health People who were emotionally neglected as children are more likely to suffer a stroke as adults, according to a new study. Researchers found people who felt ignored and unsupported when young had a higher risk of the brain-damaging condition in later life. Study author Dr Robert Wilson, of Rush University Medical Centre in Chicago, said: 'Studies have shown that children who were neglected emotionally in childhood are at an increased risk of a slew of psychiatric disorders, however, our study is one of few that look at an association between emotional neglect and stroke.' For the study, 1,040 people 55 years of age or older took a survey measuring physical and emotional abuse before the age of 18.

The Talent Code The fear factor: Researchers discover technique to erase short newly formed memories Researchers claim to be able to erase newly formed emotional memoriesBreakthrough could lead to new treatments for phobias and post traumatic stress Published: 18:53 GMT, 20 September 2012 | Updated: 06:43 GMT, 21 September 2012 Erasing memories has long been a staple of sci-fi films, but researchers now believe they have made a breakthrough in making the process reality. The groundbreaking research at Uppsala University in Sweden could lead to radical new treatments for sufferers of anxiety and post traumatic stress disorders. It shows for the first time that newly formed emotional memories can be erased from the human brain. Men in Black famously used memory erasing gadgets - now scientists believe they can actually erase short term memories. This is shown by researchers from Uppsala University in a new study now being published by the academic journal Science. 'These findings may be a breakthrough in research on memory and fear.

NAGC - The National Association for Gifted Children - Useful Links Gifted Organisations: World Council for Gifted and Talented Children This is a nonprofit international organization, dedicated to the advocating the needs of gifted and talented children throughout the world. Potential Plus UK is a member of the World Council. Profoundly and Exceptionally Gifted Youth PEGY is a UK based support organisation for those involved in parenting and teaching profoundly and exceptionally gifted children. Family Education, Gifted and Talented Family Education's webpage about gifted and talented children. Talent Development Resources Website with fantastic articles and resources tackling fundamental and controversial topics about giftedness. Supporting Emotional Needs of the Gifted SENG is a US based organisation dedicated to fostering environments in which gifted children and adults, in all their diversity, understand and accept themselves and are are understood, valued nurtured and supported by their families, schools, workplaces and communities. Mumsnet Other:

Reducing academic pressure may help children succeed Children may perform better in school and feel more confident about themselves if they are told that failure is a normal part of learning, rather than being pressured to succeed at all costs, according to new research published by the American Psychological Association. "We focused on a widespread cultural belief that equates academic success with a high level of competence and failure with intellectual inferiority," said Frederique Autin, PhD, a postdoctoral researcher at the University of Poitiers in Poitiers, France. "By being obsessed with success, students are afraid to fail, so they are reluctant to take difficult steps to master new material. The study, published online in APA's Journal of Experimental Psychology: General, could have important implications for teachers, parents and students, said Jean-Claude Croizet, PhD, a psychology professor at the University of Poitiers who supervised the research based on Autin's doctoral dissertation.

The Roots of Autism Are in the…Skin? The skin is our gateway to the physical world. Below its surface are oodles of nerve fibers relaying different types of messages to the brain. At the ends of the fingertips, for example, fat and fast Aβ nerves help you fish for keys at the bottom of a messy purse, or feel the difference between cotton and polyester. Nearby those big nerves are thinner and slower C-fiber nociceptors, which transmit pain, and others that relay itchiness. What I didn’t know until this week is that there is yet another type of nerve, found only under hairy skin, that carries information about our social interactions. These nerves, known as C-tactile (CT) afferents, respond to slow, gentle stroking — the soft touch you’d give to a baby’s forehead or a lover’s arm. “A hand on the shoulder, a pat on the back — these things anchor and cement social relationships in a meaningful way,” says Francis McGlone, a cognitive neuroscientist at Liverpool John Moores University in the U.K.

Convergent and Divergent Learning Hudson (1967) studied English schoolboys, and found that conventional measures of intelligence did not always do justice to their abilities. The tests gave credit for problem-solving which produced the "right" answer, but under-estimated creativity and unconventional approaches to problems. He concluded that there were two different forms of thinking or ability in play here: One he called "convergent" thinking, in which the person is good at bringing material from a variety of sources to bear on a problem, in such a way as to produce the "correct" answer. This kind of thinking is particularly appropriate in science, maths and technology. The other he termed "divergent" thinking. In order to get at this kind of thinking, he devised open-ended tests, such as the "Uses of Objects" test Uses of Objects Test Below are five everyday objects. A barrel A paper clip A tin of boot polish A brick A blanket (No time limit: usually completed in 15 minutes) From Hudson 1967