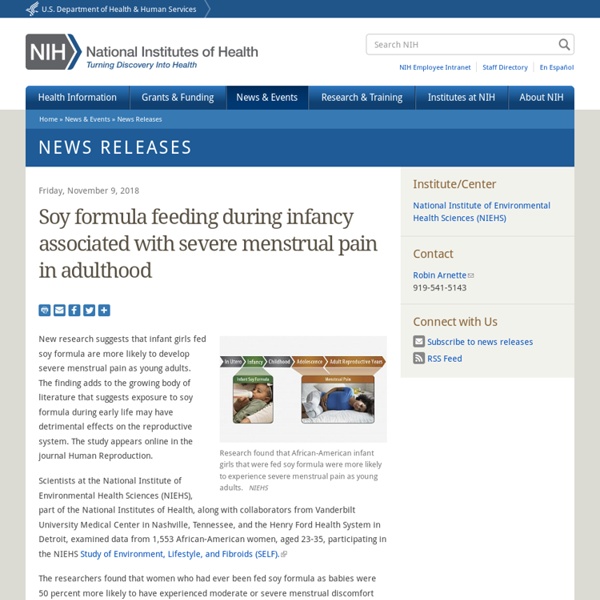 News Release Friday, November 9, 2018 New research suggests that infant girls fed soy formula are more likely to develop severe menstrual pain as young adults. The finding adds to the growing body of literature that suggests exposure to soy formula during early life may have detrimental effects on the reproductive system. The study appears online in the journal Human Reproduction. Scientists at the National Institute of Environmental Health Sciences (NIEHS), part of the National Institutes of Health, along with collaborators from Vanderbilt University Medical Center in Nashville, Tennessee, and the Henry Ford Health System in Detroit, examined data from 1,553 African-American women, aged 23-35, participating in the NIEHS Study of Environment, Lifestyle, and Fibroids (SELF). NIEHS postdoctoral researcher and lead author Kristen Upson, Ph.D., offered a potential explanation for the association between soy formula and severe menstrual pain. Grant Numbers: ZIAES049013, K99NR017191 References

Eating Healthy Is Good for Your Brain The more fruits, vegetables and fish respondents say they eat, the better they rate their brain health and overall health. Sixty-three percent of the adults surveyed say they eat a healthy diet up to three or four days a week. Those who eat seafood in a typical week, but not red meat, report better brain health and higher average mental well-being scores than individuals who have red meat but not seafood. The survey results are in line with new recommendations by AARP’s Global Council on Brain Health (GCBH), which conclude that a plant-based diet rich in fruits and vegetables is associated with better brain health and that eating fish and other seafood seems to improve cognitive function. In addition, excessive amounts of alcohol, saturated fats and salt are all harmful to brain health, according to the GCBH. The foods that researchers say lead to brain health are the same ones that studies consistently show promote good heart health.

Medicaid work requirements: Where do they stand after the blue wave? The 2018 midterm elections have dealt a significant setback to President Trump’s agenda in the legislative arena. However, there are still many ways for the Trump administration to keep swinging away at the Affordable Care Act. One particularly effective unilateral instrument is the regulatory process – that is, the implementation of statutory law by executive agencies. This may prove particularly consequential for Medicaid, the health coverage program for those with low incomes or disabilities. One particular area of attention for scholars like me is so-called community engagement or work requirements for Medicaid beneficiaries. These mandates generally require beneficiaries to conduct work-related activities or lose coverage.

Macron condemned the rise of nationalism in front of Trump and Putin, warning that 'old demons are reawakening' PARIS (Reuters) - French President Emmanuel Macron used an address to world leaders gathered in Paris for Armistice commemorations on Sunday to send a stern message about the dangers of nationalism, calling it a betrayal of moral values. With US President Donald Trump and Russian President Vladimir Putin sitting just a few feet away listening to the speech via translation earpieces, Macron denounced those who evoke nationalist sentiment to disadvantage others. "Patriotism is the exact opposite of nationalism: nationalism is a betrayal of patriotism," Macron said in a 20-minute address delivered from under the Arc de Triomphe to mark the 100th anniversary of the end of World War One. "By pursuing our own interests first, with no regard to others', we erase the very thing that a nation holds most precious, that which gives it life and makes it great: its moral values." There was no immediate response from either the White House or the Kremlin to Macron's comments.

Ditch the almond milk: why everything you know about sustainable eating is probably wrong In food and drink, we all want to do the right thing. We want to shop and eat sustainably. But, sometimes, it is easier said than done. Our willingness to jump on the latest eco-trends and unquestioningly accept reassuring labelling can lead to unintended consequences. If we are serious about eating green, we need to read beyond the headlines and think rigorously about how we apply ethical advice in our own lives.

In the Age of A.I., Is Seeing Still Believing? In 2011, Hany Farid, a photo-forensics expert, received an e-mail from a bereaved father. Three years earlier, the man’s son had found himself on the side of the road with a car that wouldn’t start. When some strangers offered him a lift, he accepted. A few minutes later, for unknown reasons, they shot him. A surveillance camera had captured him as he walked toward their car, but the video was of such low quality that key details, such as faces, were impossible to make out. The other car’s license plate was visible only as an indecipherable jumble of pixels. Cooking on a Bootstrap Bagged salad is one of the most wasted foods in Britain, with over half of it ending up in landfill. I have had this recipe in mind since my first cookbook, A Girl Called Jack, and although it is something I make for myself on a regular basis, absorbed into my household as a common staple, it has never been committed to paper (nor screen) until now. Bags of salad can be expensive to buy full price, but can often be found in the reduced chiller at the supermarket, which is where I nabbed this one. I wrestled with pricing it at the reduced price here, as I am well aware that if your reduced chiller is devoid of salad bags then the price of the recipe increases, but this website has always been a combination of everyday reportage and gentle instruction, so I hope nobody takes umbrage to it. Serves 6 at 9p each

The Best Emergency Preparedness Supplies for 2019: Reviews by Wirecutter The key tools to have on hand for an emergency—everything from an atlas to good duct tape—are also key tools to have on hand for life in general. A common theme that we noticed in this category is that while a great tool can be a genuine joy to use and serve you well for years (if not decades), cheap imitators will waste both your money and your time. Go for the good stuff. —KT Gas shut-off tool The treasure trove of unique genomes hiding in plain sight Jenn Liv There’s a boxed warning that comes along with Plavix, the anti-blood-clotting drug that hit the market in 1997. If you’re a “poor metabolizer,” it warns, the drug may not be effective for you and might even lead to negative effects.

Tropical disease outbreaks are growing threat in Europe as temperatures rise Europe is facing a growing threat of tropical disease outbreaks, as rising temperatures linked to climate change cause illnesses brought by travellers to spread more easily, health experts warned. This summer has seen a sharp spike in West Nile virus infections in Europe, following soaring temperatures, compared with the past four years. Until the middle of August, 400 cases of the disease, which is carried by mosquitos, were recorded in Europe, with 22 fatalities, according to the European Centre for Disease Prevention and Control (ECDC). Countries affected include Italy, Greece, Hungary, Serbia and Romania, all of which have recorded cases of the tropical infection in the past. The spike was due to an early start to the transmission season, caused by high temperatures followed by wet weather, conditions ideally suited to mosquito breeding, according to the World Health Organization’s regional office for Europe.