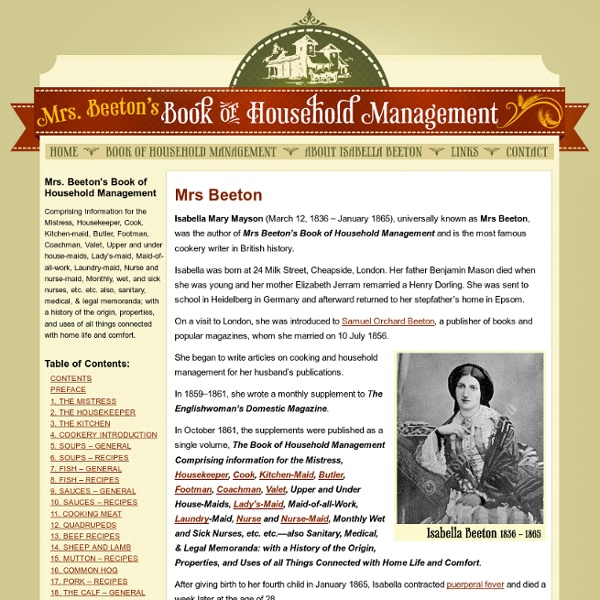 Isabella Mary Mayson (March 12, 1836 – January 1865), universally known as Mrs Beeton, was the author of Mrs Beeton’s Book of Household Management and is the most famous cookery writer in British history. Isabella was born at 24 Milk Street, Cheapside, London. Her father Benjamin Mason died when she was young and her mother Elizabeth Jerram remarried a Henry Dorling. She was sent to school in Heidelberg in Germany and afterward returned to her stepfather’s home in Epsom. On a visit to London, she was introduced to Samuel Orchard Beeton, a publisher of books and popular magazines, whom she married on 10 July 1856. She began to write articles on cooking and household management for her husband’s publications.

Japanese Stories Go to Tom Ray's home page. Go to the Tierra home page. I have translated these texts as my own way of studying Japanese. I have made them available on my web page primarily for other people studying Japanese (and also for Japanese people studying English), but also for those in the West who may not be familiar with these stories. The Permaculture Concept (1989 The word permaculture, coined by Australians Bill Mollison and David Holmgren during the 1970s, is a portmanteau of permanent agriculture as well as permanent culture. Through a series of publications, Mollison, Holmgren and their associates documented an approach to designing human settlements, in particular the development of perennial agricultural systems that mimic the structure and interrelationship found in natural ecologies. Permaculture design principles extend from the position that "The only ethical decision is to take responsibility for our own existence and that of our children" (Mollison, 1990). While originating as an agro-ecological design theory, permaculture has developed a large international following of individuals who have received training through intensive two week long 'permaculture design courses'.

Memoirs of an Arabian Princess. Memoirs of an Arabian Princess by Emily Ruete (Salamah bint Saïd; Sayyida Salme, Princess of Zanzibar and Oman) (1844-1924) Translated by Lionel Strachey. New York: Doubleday, Page and Co., 1907. [Cover] Memoirsof anArabian Princess Memoirs of Charming Women THE AUTHORESS Salamah bint Saïd, afterward Emily Ruete Craft the Perfect Keychain This Weekend Doesn't that increase the difficulty of turning them? Just curious, not being critical. The plastic hinge ends of that flash drive broke in my pocket after I used the drive once...has yours held up better? Yeah sure, but now it's harder to hold them and turn them. Also, if doing just that for what seems to be 3 keys saved space, your pockets must be pretty tight

Diaries of Court Ladies of Old Japan. [Page] [Frontispiece] COURT LADY'S FULL DRESS IN THE HEIAN PERIOD (For explanation see List of Illustrations) [Title Page] Professor in the Imperial University, Tokio Waste Baskets I think that we should regard the waste basket as a mark of shame for our culture. Our culture is built around disposability. We are the first culture in the history of humanity to believe so completely in the idea that there is always going to be more for us to extract from the earth.

Tate no Yuusha no Nariagari:Web Chapter 26 - Baka-Tsuki The next morning, Raphtalia overslept due to staying up late last night. I groaned while holding the magic book in one hand. Eh? I was brewing medicinal herbs into medicine. While I was preparing to leave to regain some time from oversleeping.

What are the Unborn Elders? Answer: The unborn elders are the children of your tribe who have not yet been born, and the grandchildren of your tribe not yet born, and so on; marching into the future. Freepathers frequently 'pray' to the unborn elders by making promises to these unborn generations, and by reaffirming their obligations to these unbron children and the impact that the actions of those of us currently alive will have on the later generations. Freepathers do no impute any mystical power to the unborn elders, and understand that the unborn elders are a mental construct used to visualize people who do not yet exist, but who- when they do exist- will have to live with the consequences of the actions of those who do currently exist. Prayer to the Unborn Elders is a method reminding us of our obligation to future generations.