In the Age of A.I., Is Seeing Still Believing? 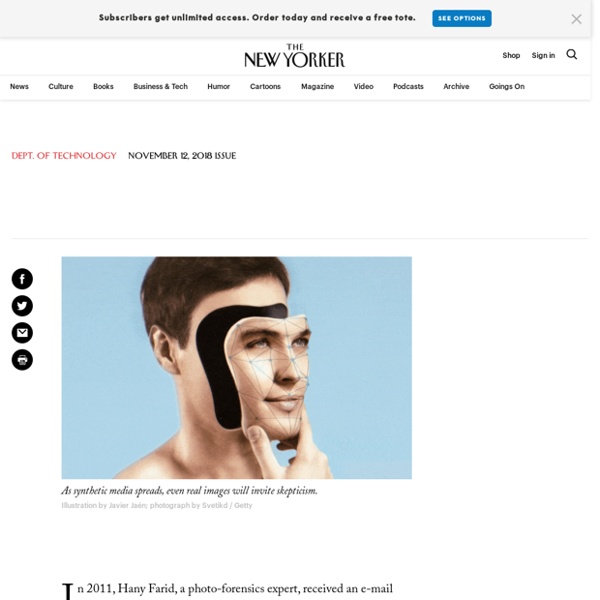 In 2011, Hany Farid, a photo-forensics expert, received an e-mail from a bereaved father. Three years earlier, the man’s son had found himself on the side of the road with a car that wouldn’t start. When some strangers offered him a lift, he accepted. A few minutes later, for unknown reasons, they shot him. A surveillance camera had captured him as he walked toward their car, but the video was of such low quality that key details, such as faces, were impossible to make out. The other car’s license plate was visible only as an indecipherable jumble of pixels. Farid had pioneered the forensic analysis of digital photographs in the late nineteen-nineties, and gained a reputation as a miracle worker. A few months later, though, Farid had a thought. Such an undertaking seemed impractical, and for a while it was. In a media environment saturated with fake news, such technology has disturbing implications. Not all synthetic media is dystopian. “In the past, anybody could buy Photoshop.

More acidic oceans 'will affect all sea life' Image copyright JAGO-TEAM/GEOMAR All sea life will be affected because carbon dioxide emissions from modern society are making the oceans more acidic, a major new report will say. The eight-year study from more than 250 scientists finds that infant sea creatures will be especially harmed. Job Openings Bunk The Republican National Committee and others have taken to claiming that the number of job openings exceeds the number of job seekers for the first time “in history,” a sweeping claim that is without factual support, and likely false. It’s true that the number of unfilled job openings is now greater than the number of unemployed people for the first time on record, but records only go back 18 years. Despite what some GOP spinmeisters would have you believe, “history” didn’t start in December of 2000.

This clever AI hid data from its creators to cheat at its appointed task Depending on how paranoid you are, this research from Stanford and Google will be either terrifying or fascinating. A machine learning agent intended to transform aerial images into street maps and back was found to be cheating by hiding information it would need later in “a nearly imperceptible, high-frequency signal.” Clever girl! But in fact this occurrence, far from illustrating some kind of malign intelligence inherent to AI, simply reveals a problem with computers that has existed since they were invented: they do exactly what you tell them to do. The intention of the researchers was, as you might guess, to accelerate and improve the process of turning satellite imagery into Google’s famously accurate maps.

Study: Religious fundamentalists and dogmatic individuals are more likely to believe fake news New research provides evidence that delusion-prone individuals, dogmatic individuals, and religious fundamentalists are more likely to believe fake news. The study, which appears in the Journal of Applied Research in Memory and Cognition, suggests that the inability to detect false information is related to a failure to be actively open-minded. The rise of online social media has led to growing concerns about the spread of unsubstantiated rumors, misleading political propaganda, and blatantly false articles designed to create viral web traffic. Even the U.S.

DARPA wants to build an AI to find the patterns hidden in global chaos That most famous characterization of the complexity causality, a butterfly beating its wings and causing a hurricane on the other side of the world, is thought-provoking but ultimately not helpful. What we really need is to look at a hurricane and figure out which butterfly caused it — or perhaps stop it before it takes flight in the first place. DARPA thinks AI should be able to do just that. A new program at the research agency is aimed at creating a machine learning system that can sift through the innumerable events and pieces of media generated every day and identify any threads of connection or narrative in them. It’s called KAIROS: Knowledge-directed Artificial Intelligence Reasoning Over Schemas. “Schema” in this case has a very specific meaning.

The Best Emergency Preparedness Supplies for 2019: Reviews by Wirecutter The key tools to have on hand for an emergency—everything from an atlas to good duct tape—are also key tools to have on hand for life in general. A common theme that we noticed in this category is that while a great tool can be a genuine joy to use and serve you well for years (if not decades), cheap imitators will waste both your money and your time. Go for the good stuff. —KT Gas shut-off tool If you smell, hear, or see evidence of a gas leak in the aftermath of an earthquake or some other disaster, your first priority is to turn your gas off. Do Uncancelled Stamps Prove Mail Bombs Were Not Sent Through the USPS? The lack of postmarks on explosive devices mailed to Democratic officials proves those items were not sent through the USPS. In October 2018, multiple parcels housing mail bombs were sent to various Democrats and critics of President Trump, including the Clintons, the Obamas, Joe Biden, George Soros, and actor Robert de Niro. According to various accounts, the packages included “explosive devices made from PVC pipe and contained a timer (likely a digital alarm clock) to set off the detonator.

Never mind killer robots—here are six real AI dangers to watch out for in 2019 Once it was fashionable to fret about the prospect of super-intelligent machines taking over the world. The past year showed that AI may cause all sorts of hazards long before that happens. The latest AI methods excel at perceptual tasks such as classifying images and transcribing speech, but the hype and excitement over these skills have disguised how far we really are from building machines as clever as we are. This Ad Was Rejected By The Oscars For Being “Too Graphic”, But It Shows The Reality Of A New Mom As Hollywood’s A-list celebrities were walking down the red carpet at this year’s Academy Awards, a new Frida Mom postpartum ad was causing controversy for not being accepted to the party. ABC refused to show the commercial during their three-hour broadcast of the Oscars, saying it was “too graphic”. The clip shows a new mom during the first days after giving birth, facing the effects it has had on her body.

Does This Video Show a Man Ripping the MAGA Hat Off a Trump Supporter? A video shows a white man ripping the “MAGA” hat off the head of a black Trump supporter in a Starbucks. On 25 October 2018, the Instagram account “funny__marco_” shared a video that purported to show an altercation in a Starbucks between a black man wearing a Make America Great Again (MAGA) hat and a white man who ripped it off his head in anger: The video was captioned, like so many others of its time, with a call for fans to follow a YouTube channel — a channel featuring many other bits of staged, awkward, or humorous confrontations.

Governance of Artificial Intelligence The views expressed in this report are those of the authors. Their statements are not necessarily endorsed by the affiliated organisations or the Global Challenges Foundation. Until recently, advanced artificial intelligence was still thought of as science fiction. As such, researchers in industry, academia, and government were more concerned with simply making it work. COVID Underdogs: Mongolia - Indi Samarajiva - Medium The best COVID-19 response in the world Mongolia has had the best COVID-19 response in the world. Not only do they have zero deaths, they have zero local transmissions.

Pence NFL walkout political planned stunt - who pays the cost A year ago almost to the day, Vice President Mike Pence arrived at an Indianapolis Colts game against the San Francisco 49ers, ostensibly to watch the Colts honor former franchise QB Peyton Manning. But when several members of the 49ers knelt during the national anthem, Pence, his wife, and his security team walked out. The move drew praise from the president. But many observers called it a stunt, a deliberate performance meant to whip up the base, and newly released documents indicate that Pence’s walkout was anything but a spontaneous demonstration of patriotic outrage. Why Pence walked out