On a construit une Borne d’Arcade 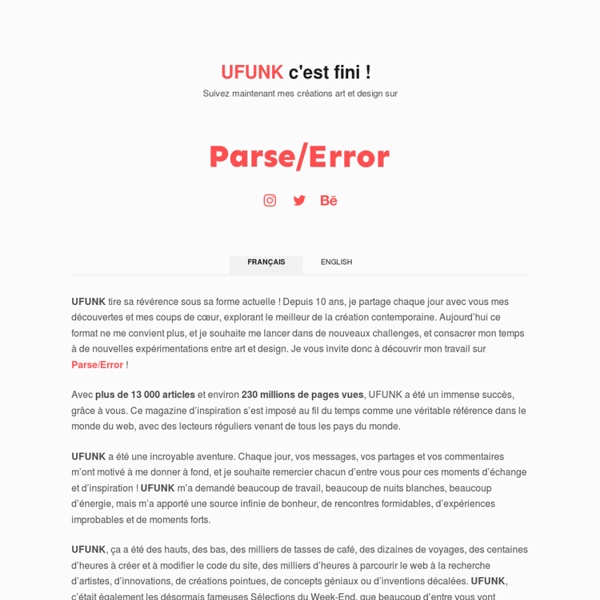 Design Observer John Foster has been a longtime collector of self-taught art and vernacular photography, as well as an artist, designer, and art curator. His collection of anonymous, found snapshots has toured the country for over five years and has been reviewed and featured in Harper’s Magazine, Newsweek Online, Phaidon, SF Gate, The Village Voice and many others. In 2005, Art & Antiques magazine named John one of the “Top 100 Collectors” in the United States. Add Maps & Captured Pictures to Chatroulette and ... Uh-Oh! - Fl If the message that you need to be careful about what you say and do on the Internet hasn’t sunk in just yet, get ready: pictures from Chatroulette have been captured, geo-coded, and are available for anyone to see at Chatroulettemap. If you’ve missed it, Chatroulette is a new web site where you can go to instantly start chatting with random strangers across the Internet. It’s a cool enough idea, I suppose; why not make an occasional new friend this way?

Home CBS asks for more money from a declining Time-Warner Cable, while customers can get it nearly free online or via an antenna. Before Google Glass' latest patch, a picture could have been worth a thousand hacks. It might be the technology of the future — but not of the present, judging by the simplistic and surprisingly expensive items offered so far. Bigger isn't always better. Jabii - The Friendly Boxing Game by Jabii Risks and challenges The prototyping phase of the Jabii toy is more or less complete. What’s left to complete is to fully develop the foam helmet and to finalize the game for smart devices. SOFTWARE Since the software is a major part of the JABII product it is also where a lot of the risk lies. We don’t see the app as a big risk. Making an app is standard procedure by now and it won’t be hard to find people who are great at making apps and mobile games.

Inside Instruments This print campaign for the Berlin Philharmonic orchestra uses macro photographs taken inside the cramped spaces of instruments making the inner workings of a violin, cello, flute, and pipe organ appear vast and spacious, almost as if you could walk around inside them. So wonderfully done. Art directed by photographer Bjoern Ewers, you can see more over on Behance. Update: The photography is by Mierswa Kluska and the original concept came from Mona Sibai and Björn Ewers. Adorably Awkward Cards by Emily McDowell I have a confession. I have been obsessed with Emily McDowell's illustrations ever since I laid eyes on them. This woman has the most hilarious sense of humor I have found on the Internet in a very long, long time. The illustrator, designer and self-professed "truth-teller" only really busted out into the art scene in January 2013, when she created a funny Valentine's Day card (seen above), put it on Etsy and then had it go viral after Etsy featured it on their Facebook page. In May 2013, she launched her own line of 45 cards at the National Stationary Show, and, according to the illustrator, "every day since has been an adventure. An amazing, crazy, learning-curve-tastic adventure."

CHATROULOLZ - Flock Oh Japan You So Funny.. Posted 3 years ago 120 notes Levoltz - The Social Media Guide LeVoltz.com may be available for purchase. Inquire today! Inquiry Form Inquire with your Facebook or LinkedIn profile, or complete this form to receive a free quote. Make clay robots with your kids / Boing Boing We were stuck inside, on a rainy day, and decided to sculpt some robots! Clay Bots has everything you need, and some great design suggestions! Use the included brightly colored air-dying clay to build your robot.