What billionaires want: the secret influence of America’s 100 richest 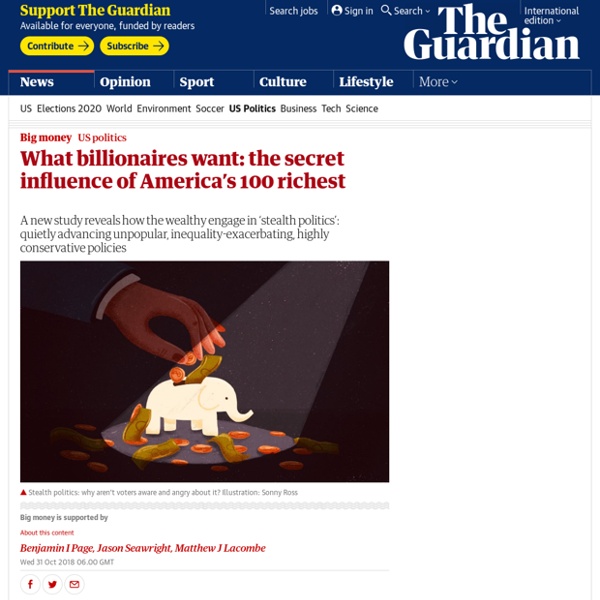 If we judge US billionaires by their most prominent fellows, they may seem to be a rather attractive bunch: ideologically diverse (perhaps even tending center-left), frank in speaking out about their political views, and generous in philanthropic giving for the common good – not to mention useful for the goods and jobs they have helped produce. The very top titans – Warren Buffett, Jeff Bezos, Bill Gates – have all taken left-of-center stands on various issues, and Buffett and Gates are paragons of philanthropy. The former New York mayor Michael Bloomberg is known for his advocacy of gun control, gay rights, and environmental protection. George Soros (protector of human rights around the world) and Tom Steyer (focused on young people and environmental issues) have been major donors to the Democrats. In recent years, investigative journalists have also brought to public attention Charles and David Koch, mega-donors to ultra-conservative causes. Unfortunately, this picture is misleading.

1% Won't Owe Social Security Tax After 2019 click 2x Without question, Social Security is this country's most important social program. It can rightly be called a financial rock for millions of elderly Americans, with the benefits provided accounting for more than half of all monthly income for 62% of retired workers and the program single-handedly keeping 15.3 million of those aged beneficiaries above the federal poverty line. But it's also a heavily criticized program for the way it collects revenue. Image source: Getty Images.

How the Koch brothers built the most powerful rightwing group you've never heard of The cries of “Shame! Shame! Shame!” 4 Ways Fred Trump Made Donald Trump and His Siblings Rich In Donald J. Trump’s version of how he got rich, he was the master dealmaker who parlayed an initial $1 million loan from his father into a $10 billion empire. It was his guts and gumption that overcame setbacks, and his father, Fred C. Trump, was simply a cheerleader. But an investigation by The New York Times shows that by age 3, Donald Trump was earning $200,000 a year in today’s dollars from his father’s empire. The trolling of Elon Musk: how US conservatives are attacking green tech He is the charismatic Silicon Valley entrepreneur who believes his many companies - including the electric car manufacturer Tesla Motors, solar power firm Solar City, and SpaceX, which makes reusable space rockets – can help resist man-made climate change. South African-born Elon Musk is a billionaire green evangelist, a bete noire of the fossil fuels industry who talks about colonising Mars and believes it may be possible that we’re living in a computer simulation. But having been feted by the Obama administration, he now faces an extraordinary barrage of attacks from rightwing thinktanks, lobbyists, websites and commentators. The character of the assault says much about which way the political wind is blowing in Washington – something that will have consequences that stretch far beyond the US. One of Musk’s most trenchant critics has been the journalist Shepard Stewart, who writes for a clutch of conservative online news sites. Koch Industries did not respond to requests for comment.

How US billionaires are fuelling the hard-right cause in Britain Dark money is among the greatest current threats to democracy. It means money spent below the public radar, that seeks to change political outcomes. It enables very rich people and corporations to influence politics without showing their hands. Billionaires v teachers: the Koch brothers' plan to starve public education Arizona has become the hotbed for an experiment rightwing activists hope will redefine America’s schools – an experiment that has pitched the conservative billionaires the Koch brothers and Donald Trump’s controversial education secretary, Betsy DeVos, against teachers’ unions, teachers and parents. Neither side is giving up without a fight. With groups funded by the Koch brothers and DeVos nudging things along, Arizona lawmakers enacted the nation’s broadest school vouchers law, state-funded vouchers that are supposed to give parents more school choice and can be spent on private or religiously affiliated schools. For opponents, the system is not about choice but about further weakening the public school system. A half-dozen women who had battled for months against the legislation were angry as hell.

Meet Dr Miriam Adelson: the record-breaking Republican donor driving Trump's Israel policy When Dr Miriam Adelson was awarded the US Presidential Medal of Freedom, the nation’s top civilian honor, by Donald Trump in November, the public response ranged from disdainful to “who?” Her husband, the casino billionaire Sheldon Adelson, is widely known for his record donations to Republican causes, as well as passionate support for conservative Israeli interests. Many news articles about the award described Miriam solely as his wife. People no longer believe working hard will lead to a better life, survey shows - Hack - triple j A growing sense of inequality is undermining trust in both society's institutions and capitalism, according to a long-running global survey. The 2020 Edelman Trust Barometer - now in its 20th year - has found many people no longer believe working hard will give them a better life. Despite strong economic performance, a majority of respondents in every developed market do not believe they will be better off in five years' time. This means that economic growth no longer appears to drive trust, at least in developed markets - upending the conventional wisdom. "We are living in a trust paradox," said Richard Edelman, CEO of Edelman.