The unseen driver behind the migrant caravan: climate change 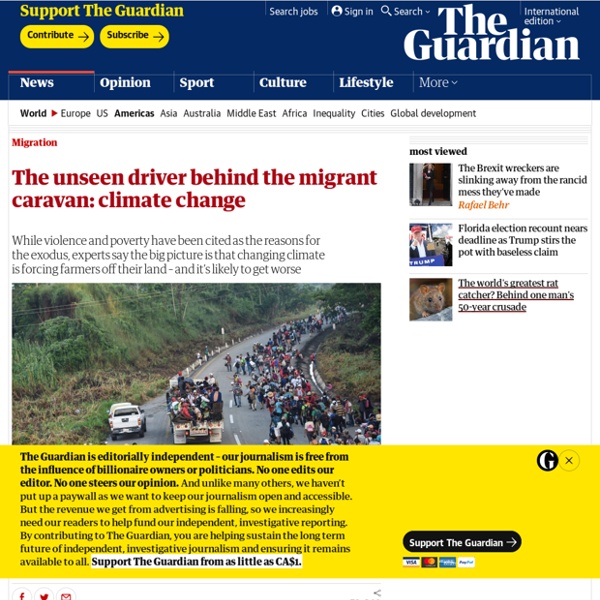 Thousands of Central American migrants trudging through Mexico towards the US have regularly been described as either fleeing gang violence or extreme poverty. But another crucial driving factor behind the migrant caravan has been harder to grasp: climate change. Most members of the migrant caravans come from Guatemala, Honduras and El Salvador – three countries devastated by violence, organised crime and systemic corruption, the roots of which can be traced back to the region’s cold war conflicts. Experts say that alongside those factors, climate change in the region is exacerbating – and sometimes causing – a miasma of other problems including crop failures and poverty. And they warn that in the coming decades, it is likely to push millions more people north towards the US. “The main reason people are moving is because they don’t have anything to eat. “It didn’t rain this year. “It wasn’t the same before. As a result, more than 3 million people have struggled to feed themselves.

Trump borrows from the old tricks of fascism The governing principle of the Trump administration is total irresponsibility, a claim of innocence from a position of power, something which happens to be an old fascist trick. As we see in the president’s reactions to American rightwing terrorism, he will always claim victimhood for himself and shift blame to the actual victims. As we see in the motivations of the terrorists themselves, and in the long history of fascism, this maneuver can lead to murder. The Nazis claimed a monopoly on victimhood.

Trump's Budget Wouldn't Erase Deficits, CBO Said Under President Donald Trump’s proposed budget for fiscal year 2018, there would have been hundreds of billions of dollars in deficits each year from 2018 to 2027, according to projections from the nonpartisan Congressional Budget Office. That contradicts Acting White House Chief of Staff Mick Mulvaney’s claim that the U.S. “would actually be on a glide path to balancing the budget” had Congress enacted Trump’s desired plan. CBO did say that deficits and debt would be lower under Trump’s plan than they would have otherwise been under law at the time. But, while the Office of Management and Budget projected that Trump’s budget would add $3.2 trillion to the deficit over that 10-year period, CBO estimated deficits would increase by $6.8 trillion.

The origins of Thanksgiving Before gobbling turkey, stuffing and pumpkin pie -- or engaging in a well-informed political spat with your family -- some of you might wonder where the Thanksgiving tradition originated. We wondered, too. So we talked with historians to get the facts straight. As it turns out, historians trace the food coma-inducing tradition to multiple origins -- none of which closely resemble what Americans celebrate today. Some celebrations were in the summer. Others put prayer (and even fasting) ahead of feasting.

Trump is using the government as a bargaining chip – like a dictator would “I have the absolute right to do national emergency if I want,” Donald Trump told reporters on Wednesday. The wonderful thing about Trump’s presidency (I never thought I’d begin a sentence this way), is he brings us back to basics. The basic difference between a democracy and a dictatorship comes down to means and ends. Democracy is about means, not ends. If we all agreed on the ends (such as whether to build a wall along the Mexican border) there’d be no need for democracy. But of course we don’t agree, which is why the means by which we resolve our differences are so important.

Pumpkin pies, pilgrims and pre-existing conditions: PolitiFact’s 2018 Thanksgiving dinner guide The conversation may start out innocently enough, but there will be hints of what’s to come after the turkey’s been carved. "I love all of you, regardless of your pre-existing conditions." "My, my, you’re getting tall! Older Workers See Lower Response Rates From Recruiters Getty Images Boomer applicants receive a lower rate of response from employers than millennials. If you feel like submitting your résumé for a job is the equivalent of sending it into a black hole, the problem might be with how old your résumé makes you look.

The bad behavior of the richest: what I learned from wealth managers If nearly a decade interviewing the wealth managers for the 1% taught me anything, it is that the ultra-rich and the ultra-poor have a lot more in common than stereotypes might lead you to believe. In conversation, wealth managers kept coming back to the flamboyant vices of their clients. It was quite unexpected, in the course of discussing tax avoidance, to hear professional service providers say things like: “I’ve told my colleagues: ‘If I ever become like some of our clients, shoot me.’ Because they are really immoral people – too much time on their hands, and all the money means they have no limits.

Bill in Congress Could Help People With Disabilities People with disabilities who need help with basic daily activities could be entitled to long-term services at home or in the community under bipartisan bills introduced Tuesday in the U.S Senate and House of Representatives. The Disability Integration Act of 2019 would guarantee that eligible people with disabilities are offered services in the community. Those already living in institutions would need to be informed about available options in the community. The Trick To Thinking Clearer and Better – Personal Growth The late historians Will and Ariel Durant spent four decades of their life studying, compiling, and writing the history of Western civilization. The product of their efforts, The Story of Civilization, went on to fill four million words, across 10,000 pages, divided into 11 separate books. After finishing the last one, they then took on an arguably more daunting task: to summarize all they had learned into a 100 pages in The Lessons of History. It’s an incomplete and generalizing attempt, no doubt, but it is also one of the most densely-packed sources of modern wisdom available to us. There are many trends and patterns to be found in the past, and the Durants do a commendable job of highlighting them. The essence of their view, however, can be summarized by the following sentence from their short book:

The Guardian view on Israel’s democracy: killing with impunity, lying without consequence? In the last nine months of 2018, according to the United Nations, Palestinians – many of them children – were killed at the rate of around one a day while taking part in protests along Israel’s perimeter fence with Gaza about their right to return to ancestral homes. They included medics and journalists. Most of the dead were unarmed and posed no danger to anyone, with little more than rocks in their hands and slogans on their lips.

How feelings took over the world On a late Friday afternoon in November last year, police were called to London’s Oxford Circus for reasons described as “terror-related”. Oxford Circus underground station was evacuated, producing a crush of people as they made for the exits. Reports circulated of shots being fired, and photos and video appeared online of crowds fleeing the area, with heavily armed police officers heading in the opposite direction. Amid the panic, it was unclear where exactly the threat was emanating from, or whether there might be a number of attacks going on simultaneously, as had occurred in Paris two years earlier. Armed police stormed Selfridges department store, while shoppers were instructed to evacuate the building.