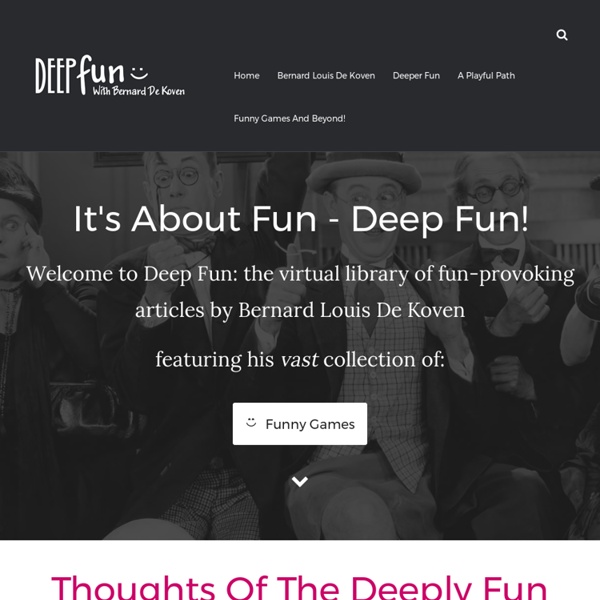 The experience of the well-played game is what we love most about sports, but it is accessible only to truly accomplished athletes. There are thousands of other games besides sports. Most of them are easier to play, more inviting, far less serious, and even more likely to lead to the very same thing we find in the well-played game – something I often find myself calling “deep fun.” We start with Seven Ways to Make Almost Anything More Fun. Then we opine on how you can even make losing fun, if you’re playing those kinds of games. And from there, to:

The Playful Thinking Series Works of Game: On the Aesthetics of Games and Art by John Sharp Games and art have intersected at least since the early twentieth century, as can be seen in the Surrealists' use of Exquisite Corpse and other games, Duchamp's obsession with Chess, and Fluxus event scores and boxes–to name just a few examples. Over the past fifteen years, the synthesis of art and games has clouded for both artists and gamemakers. 18 Great Games You Might Not Have Played in 2012 It's finally getting to the time of year where all the big games are out and I can sit down and think for more than five minutes, so my thoughts are naturally turning from 2012's huge releases to the other stuff - the smaller, often more interesting games that have stuck in my mind as the months have gone by. For me it's often these games that give the year personality; where the schedule of big releases is pretty much the same every year (a few in January, a few in April/May, maybe one in summer, and an avalanche from September onwards), these games pop up unexpectedly, brightening a weekend or a lunch break or a cold February afternoon. The evolving nature of game narrative, particularly, has been a theme for me this year - games from The Walking Dead to Dear Esther have been ignoring the conventions of interactive storytelling, often with huge success. Thirty Flights of Loving Platforms: PC

Free Trainer Activities: Go Lean! What Others Are Saying For an agency such as ours, that also conducts many training and development related activities, you helped us organize our thoughts in a manner that we could not have done on our own … we will be seeking your services again. Director, Community Services, Mississippi Development Authority Go Lean! Why Play Matters The Problem America's kids are playing less than any previous generation. Only one in four adolescents get the recommended 60 minutes of physical activity or active play per day, with the number of younger kids only slightly higher.

Links and Ideas: Activities If you need help NOW, click for hot line numbers in several countries Group Problem Solving Initiatives Try some of these ideas to get your thinking and working together! The Ludologist – My name is Jesper Juul, and I am a ludologist [Noun. Video Game Researcher]. This is my blog on game research and other important things. These are some comments from my keynote at Rutger’s Extending Play conference in 2016, co-presenting with Shaka McGlotten. Hasn’t our sense of play suddenly become quite dark? There is a change in our primary conceptions of playing, and game-playing. In Brian Sutton-Smith’s Ambiguity of play, he lists 7 common rhetorics of play, meaning 7 common ways in which play is framed.