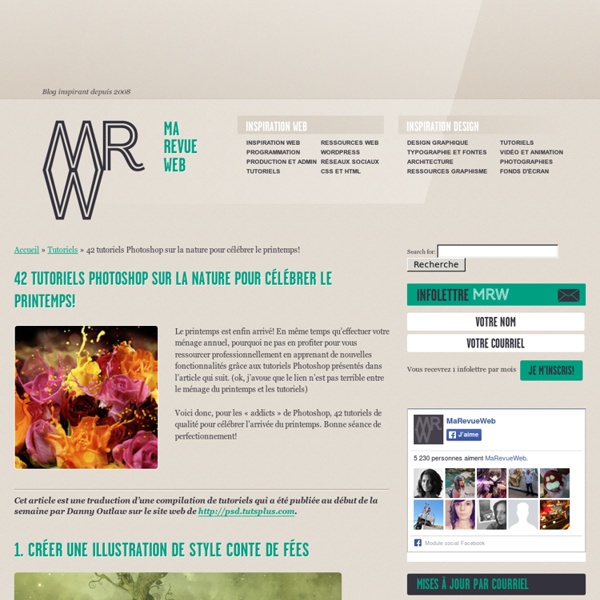 Super Fast – Speed Lighting Effect Take an image of a fireworks display and turn it into an intense sensation of speed. Manipulate natural lighting to fill a motion filled scene. Use masks to blend the effect over a car image to make the car appear to be in motion. This tutorial shows you exactly what to do. Let's get moving. CUT OUT PEOPLE Here is the first part to images cut out of the Asian people An homage to the many friends of this continent who are big fans of this blog. I hope to have done something pleasing 40 meilleurs tutoriaux Photoshop - Caractéristiques - Arts numériques Learn techniques for Photoshop across art, illustration, graphics and photography in these tutorials from the world's best practitioners. Photoshop is a very versatile software tool, as flexible for seamlessly compositing disparate elements into a beautiful photomotage as it is making your photos look even more stunning. It also provides an effortless platform for creating dynamic graphics for both web and print - and let's not forget its pragmatic usefulness as a day-to-day tool for tranforming graphics and photos into the perfect format for your output requirements. Here we've created a round-up of the best Photoshop tutorials from the past decade of Digital Arts, covering everything from collage and illustration to photography and typography. Some require a recent version of the software, such as Photoshop CC or Photoshop CS6 - but many will work in Photoshop CS, CS2, CS3, CS4 or CS5. Photoshop tutorial types

Create an Emotional, Molten, Shattered Statue in Photoshop Photo composites often require several Photoshop tools and techniques to achieve a desired effect. In this tutorial we will combine several photos to create a statue from a photo of a model. We will then explain how modify the statue to create cracks, and molten rock using layer masks, adjustments, and several blending and painting techniques. Let’s get started! Tutorial Assets The following assets were used during the production of this tutorial. Comment créer une manipulation de photo Flaming In this tutorial, we'll manipulate a picture so it looks like a woman burning in flames. The idea behind this manipulation was to create a nice looking illustration, only by using simple techniques and tools such as the Brush tool and Warp command. I hope you enjoy the tutorial and try it with your own stock imagery. Editor's note: This tutorial was originally published on Psdtuts in January 2009. Step 1 For this project, I used two nice images that suits for the manipulation; image1, image2.

Create a Surreal "Parting of the Sea" Photo Manipulation Water, by its very nature is difficult to convincingly incorporate into a composition. In this tutorial, you will discover how to combine advanced masking techniques, blending modes, adjustment layers and clever use of filters to part the sea and create a surreal photo manipulation. Let's get started! Tutorial Assets

How to Create Cool Light Effects in Photoshop This tutorial is maybe another proof that I’m a light and color effects freak, I like them very much. So, In this tutorial I’ll show you more light and layer styles effects. You don’t need any special brushes for this tutorial.