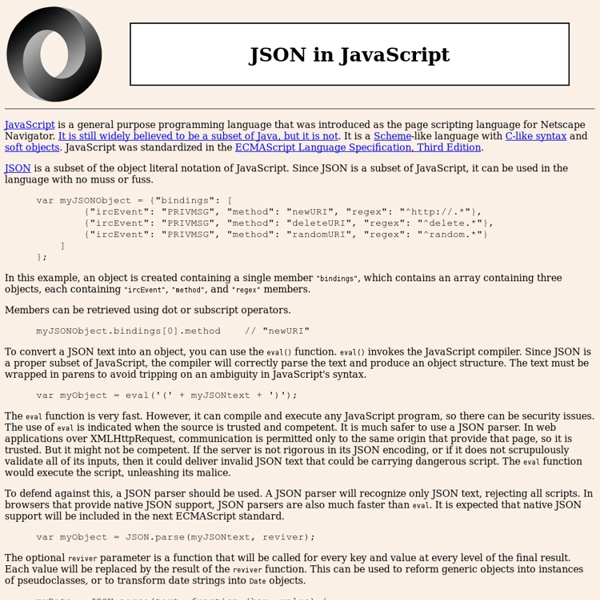 JavaScript is a general purpose programming language that was introduced as the page scripting language for Netscape Navigator. It is still widely believed to be a subset of Java, but it is not. It is a Scheme-like language with C-like syntax and soft objects. JavaScript was standardized in the ECMAScript Language Specification, Third Edition. JSON is a subset of the object literal notation of JavaScript. In this example, an object is created containing a single member "bindings", which contains an array containing three objects, each containing "ircEvent", "method", and "regex" members. Members can be retrieved using dot or subscript operators. myJSONObject.bindings[0].method // "newURI" To convert a JSON text into an object, you can use the eval() function. eval() invokes the JavaScript compiler. var myObject = eval('(' + myJSONtext + ')'); The eval function is very fast. To defend against this, a JSON parser should be used. var myObject = JSON.parse(myJSONtext, reviver);

Hacks to Beat Rapidshare Download Limits and Waiting Time - Tech Here are some hints to help you more efficiently use rapidshare. Skipping waiting time and bypassing download limits are rapidshare hacks that everybody should know. These tips have been retested and continue to work well. Updated Oct, 2010. Rapidshare has been an excellent tool for sharing large files. Recently users have discovered ways of bypassing the download limits and skipping waiting times. Several readers have emailed recently (Oct 2010) that these methods continue to work well. Update: Two new methods of bypassing download limits have been posted. RapidShare: NIC tricks and MAC cloning to bypass download limit Rapidshare traces the users IP address to limit each user to a certain amount of downloading per day. Here are some methods for doing this: 1.Short-Out the JavaScript: 1. 2.Request a new IP address from your ISP server. Here’s how to do it in windows: 1. 5. Frequently you will be assigned a new IP address when this happens. 3.Use a proxy with SwitchProxy and Chrome: 1. 4. 1.

Manually Installing The Latest Firefox in Kubuntu : A Cleaner In If you've enjoyed this blog, please consider picking up a copy of my Ubuntu book, Instant Ubuntu. Thanks for visiting! So I’ve decided that Konqueror is just not the web browser that some people want it to be. Call me spoiled / ruined for having spent so much time on Firefox, but I just can’t use it to be as productive as I want to be so I’ve installed Firefox on my Kubuntu installation. For those of you that are in similar situations keep reading and find out how to manually install Firefox within KDE. Now, I am perfectly aware that I can download and install the Firefox package simply and easily using Adept or aptitude. Installing Firefox Manually Update: I found in some additional testing that using the following command *just* installed Firefox and none of the other packages so.. you take your pick: (I normally use aptitude to install which installed optional packages as well). sudo apt-get install firefox Download the latest version of Firefox from the Mozilla web page. Done.

Quick Guide to Prototype Introduction JavaScript’s increasing popularity throughout the web makes it more important than ever to make sure our client side code is implemented with a nice mix of stability, speed, and reusability. One of the best ways for accomplishing this is to use a simple library and syntax to use as a foundation for every project. Thankfully, Sam Stephenson created an amazing library of functions that we can rely on called Prototype.js to ease our JavaScript development practices. After our readers pointed out in an previous feature that our frequent use of Prototype syntax was making things a bit confusing, we decided it would be best to create a quick reference page for the library to help ease the learning curve for a lot of developers out there. The following tutorial will explain the most common methods used in Particletree projects with simple examples of how to implement them. Getting Started Boom. Note - This tutorial is based off of version 1.3.1. $() Function node = $("elementID");

Know Dot Net - How to Create a Numeric Only TextBox Control Have you ever needed a Windows.Forms.TextBox control that only accepted letters, or that only accepted numbers? Well, the other day, I needed one and after some playing around, I decided that it's something I may well need in the future. Taking the simple logic contained below, you can easily subclass the Winows.Forms.TextBox control and stick it in your toolbox for later use. <Note that for the sake of illustration, I created two extra Booleans to use in the evaluation...you could save yourself two lines of code by including them directly>The use above will allow all valid numbers as well as decimals. To flip this around, if you wanted to allow only Letters in your text box... the following should do it for you: Now, you could easily combine these types of methods with some more sophisticated methodology, allowing for overloads for instance, to create a textbox that validates the input and changes color according to certain specifications:

SpongeBob Products - SpongeBob - 3831 - Rocket Ride Arrgh! Captain SpongeBob and his first mate Patrick have found an old treasure map and are searching for the treasure. Barnacles! The Flying Dutchman is here on his ghostly ship. Help keep him at bay using the bub ble blaster before our friends are made to walk the plank! Includes 3 minifigures: Pirate SpongeBob, Pirate Patrick and The Flying Dutchman. Overall: Rating Snapshot (20 reviews) Play Experience: Value for Money: 18 of 2090%of reviewers would recommend this product.

Quadcharge universal charging station - gizmag Article Tidy solution to charging multiple devices Image Gallery (5 images) August 28, 2007 The Quadcharge is an inexpensive, all in one hub that allows you to charge four devices simultaneously whilst decreasing the number of AC adaptors that need to be connected to a power source, while at the same time cleaning up the tangled web of cords that otherwise pervade your kitchen bench-top or home office space. View all The streamlined, simple design of the Quadcharge is aimed at hiding all of the wires normally dangling from your wall by using only one outgoing power cord. The advantages of not having a number of AC power adaptors connected to one charging station is that it will reduce the risk of overheating and fire. The station is compatible with Gomadic’s TipExchange feature, which allows you to swap the charging tips to suit different devices. This simple solution to charging all mobile gadgets costs US$49.95 and comes with a lifetime warranty. Related Articles

One of the regularly requested features for AppHarbor is a way to get full backups from SQL Server databases there. The official line so far has been to use the AppHarbor-SqlServerBulkCopy tool to bulk copy the data from the hosted server to a local copy. This requires you to have an empty target database into which to squirt the data. I’ve found a more convenient mechanism to get a simple backup of AppHarbor hosted databases using the *.BACPAC files, which it seems were created originally for getting databases in and out of Microsoft’s Azure cloud-hosting platform. BACPAC files are Data-Tier Applications (aka DAC) packages which are essentially ZIPs that contain an XML representation of the schema: … and the actual table data stored in JSON format: Schema-only packages have a DACPAC file extension instead. I think “Data-tier Applications” are what we are supposed to call databases now… Programmatically Exporting is simple enough: And importing is similarly straightforward: Command-line

Letter (paper size) A Letter size page. Comparison of Letter (shaded light blue) and Government letter sizes with some similar paper and photographic paper sizes. Letter or US Letter is a paper size for office use. It is the most common type in North America, Bolivia, Colombia, Venezuela, the Philippines and Chile.[1] It measures 8.5 by 11 inches (215.9 mm x 279.4 mm). Ronald Reagan made this the paper size for U.S. federal forms in the early 1980s; previously, the smaller "official" Government letter size, 8 in × 10.5 in (203.2 mm × 266.7 mm), was used.[2] In the U.S., paper density is usually measured in "pounds per ream" (of 500 sheets). Unlike the A4 (210 × 297 mm) international standard (ISO) paper sizes which are used in most countries in the world today, the origin of the dimensions of letter size paper are lost in tradition. The related paper size known as half letter, statement, or organizer L is exactly one half of the US letter size (8.5 × 5.5 in).