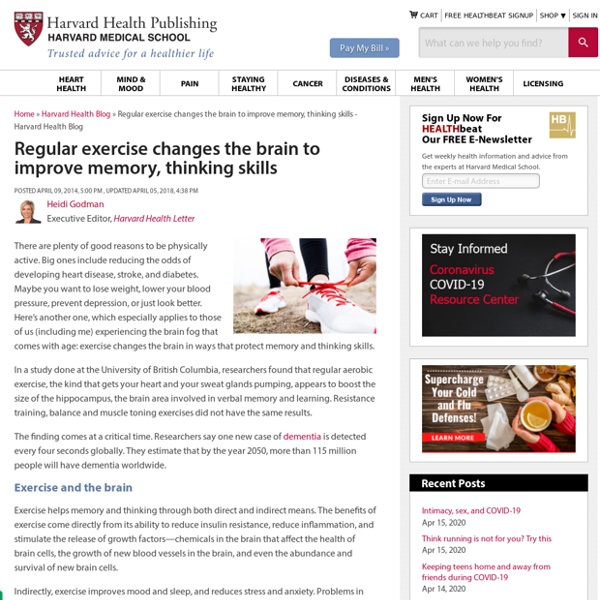 There are plenty of good reasons to be physically active. Big ones include reducing the odds of developing heart disease, stroke, and diabetes. Maybe you want to lose weight, lower your blood pressure, prevent depression, or just look better. Here’s another one, which especially applies to those of us (including me) experiencing the brain fog that comes with age: exercise changes the brain in ways that protect memory and thinking skills. In a study done at the University of British Columbia, researchers found that regular aerobic exercise, the kind that gets your heart and your sweat glands pumping, appears to boost the size of the hippocampus, the brain area involved in verbal memory and learning. Resistance training, balance and muscle toning exercises did not have the same results. The finding comes at a critical time. Exercise and the brain Exercise helps memory and thinking through both direct and indirect means. Put it to the test So what should you do?

Cognitive Health and Older Adults Cognitive health—the ability to clearly think, learn, and remember—is an important component of brain health. Others include: Motor function—how well you make and control movements Emotional function—how well you interpret and respond to emotions Sensory function—how well you feel and respond to sensations of touch, including pressure, pain, and temperature This guide focuses on cognitive health and what you can do to help maintain it. How the Aging Brain Affects Thinking The brain controls many aspects of thinking — remembering, planning and organizing, making decisions, and much more. These cognitive abilities affect how well we do everyday tasks and whether we can live independently. Some changes in thinking are common as people get older. For example, older adults may:

Cognitive Health and Older Adults Cognitive health—the ability to clearly think, learn, and remember—is an important component of brain health. Others include: Motor function—how well you make and control movements Emotional function—how well you interpret and respond to emotions Sensory function—how well you feel and respond to sensations of touch, including pressure, pain, and temperature This guide focuses on cognitive health and what you can do to help maintain it. Improving Memory: Understanding age-related memory loss Memory-training techniques Age can dull the ability to remember things. This is often the result of normal changes in the structure and function of the brain, and isn't dementia, Alzheimer's disease, or other brain problem. If you have normal age-related memory loss, several techniques can help you improve your ability to retain new information and skills. Mnemonics

Brain health rests on heart health: Guidelines for lifestyle changes Right now the world is experiencing an epidemic that is projected to get much, much worse. It’s an epidemic of dementia, affecting 50 million people and millions more of their caregivers — staggering numbers that are projected to triple by 2050. The dementia crisis is such a massive worldwide issue that the World Health Organization (WHO) announced a strategic public health action plan, including compiling an organized database of quality dementia research and creating guidelines for the prevention of dementia. The guidelines have just been published, a 96-page document that is summarized here, as well as in this post. Dementia is a progressive, heartbreaking deterioration of brain functioning associated with aging. While there are different causes, the most common — Alzheimer’s and vascular dementias — are now thought to be closely related to, and greatly impacted by, the same diet and lifestyle factors.

Eight Habits That Improve Cognitive Function The New York Times recently published an article about the "brain fitness" business, "Do Brain Workouts Work? Science Isn’t Sure." I believe the answer is no. Without a variety of other daily habits, these "brain-training" games cannot stave off mental decline or dramatically improve cognitive function. Most of these brain-training games will have some benefits, but it's impossible to optimize brain connectivity and maximize neurogenesis (growth of new neurons) sitting in a chair while playing a video game on a two-dimensional screen.

Mind games: a mental workout to help keep your brain sharp Sharon, a 46-year-old single mother of three teenagers, came to see me about her increasing forgetfulness. Working full-time and managing her household was becoming overwhelming for her, and she was misplacing lunchboxes, missing appointments and having trouble focusing her attention. She was worried because her grandmother got Alzheimer’s disease at the age of 79, and Sharon felt she might be getting it too – just a lot younger. I said it was highly unlikely that Sharon was suffering from early-onset dementia, but I agreed to evaluate her. Whenever I consult with people about their middle-aged pauses, I first check for physical conditions or medication side-effects that might be affecting their brain health. Left untreated, high cholesterol, hypertension and other age-related illnesses can worsen memory, increase the risk of dementia, and shorten life expectancy.

5 Golden Rules to Prevent Dementia According to a nationwide study in 2015, 1 in 10 Singaporeans aged 60 and above had dementia. There were 28,000 Singaporeans diagnosed with the condition that year and that number is expected to rise to 80,000 by 2030. But it’s not just the older population that suffers from dementia. In 2015, there were 121 Singaporeans below aged 65 diagnosed with the condition, up from just 27 cases in 2011. Tai chi have been found to improve cognitive function There are lots of jokes about forgetting where you put your keys, but as you get older, changes in your mental function are no laughing matter. Changes in your brain that start around age 50 can affect your memory, as well as other cognitive functions such as your ability to juggle multiple tasks, process information rapidly, and focus on details. By age 70, one in six people has mild cognitive impairment (which can progress to Alzheimer's disease). Up until about two decades ago, it was believed that your brain only produced new cells early in life. But research has shown that the brain has the ability to change throughout your entire life span, growing new cells, making new connections, and even increasing in size.

Protecting against cognitive decline While there's currently no treatment that can prevent or cure dementia, researchers have identified some factors that may help protect you from cognitive decline. Exercise Exercise offers an impressive array of health benefits. It helps prevent heart disease and type 2 diabetes; lowers the risk for high blood pressure, colon cancer, and breast cancer; and helps relieve insomnia, anxiety, and depression. 5 Benefits of Exercise for Seniors and Aging Adults You’ve heard it time and again: physical activity and exercise are good for you, and you should aim to make them part of your routine. There are countless studies that prove the important health benefits associated with exercise, and it becomes more important as we age. Regular physical activity helps improve mental and physical health, both of which will help you maintain your independence as you age. Below, we outline five benefits of exercise for seniors and aging adults. 1. Prevent DiseaseStudies have shown that maintaining regular physical activity can help prevent many common diseases, such as heart disease and diabetes.

Learning new skills keeps an aging mind sharp Older adults are often encouraged to stay active and engaged to keep their minds sharp, that they have to "use it or lose it." But new research indicates that only certain activities -- learning a mentally demanding skill like photography, for instance -- are likely to improve cognitive functioning. These findings, forthcoming in Psychological Science, a journal of the Association for Psychological Science, reveal that less demanding activities, such as listening to classical music or completing word puzzles, probably won't bring noticeable benefits to an aging mind. "It seems it is not enough just to get out and do something -- it is important to get out and do something that is unfamiliar and mentally challenging, and that provides broad stimulation mentally and socially," says psychological scientist and lead researcher Denise Park of the University of Texas at Dallas. "When you are inside your comfort zone you may be outside of the enhancement zone."