UN Says Climate Genocide Coming. But It’s Worse Than That. 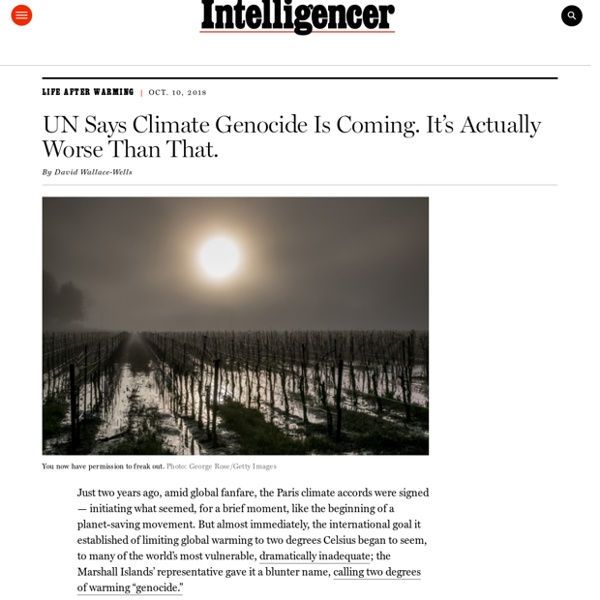 You now have permission to freak out. Photo: George Rose/Getty Images Just two years ago, amid global fanfare, the Paris climate accords were signed — initiating what seemed, for a brief moment, like the beginning of a planet-saving movement. But almost immediately, the international goal it established of limiting global warming to two degrees Celsius began to seem, to many of the world’s most vulnerable, dramatically inadequate; the Marshall Islands’ representative gave it a blunter name, calling two degrees of warming “genocide.” The alarming new report you may have read about this week from the UN’s Intergovernmental Panel on Climate Change — which examines just how much better 1.5 degrees of warming would be than 2 — echoes the charge. “Amplifies” may be the better term. If you are alarmed by those sentences, you should be — they are horrifying. Because the numbers are so small, we tend to trivialize the differences between one degree and two, two degrees and four. It is.

Increasing Frequency of Drought Is Changing the Amazon From Carbon Sink to Source - Pacific Standard Because they take vast amounts of carbon dioxide out of the atmosphere, rainforests are an important part of the planet's carbon cycle and their conservation is playing front and center in major international efforts to combat global warming. But new research finds just one season of drought can reduce the carbon dioxide absorption ability of the world's biggest rainforest—the Amazon—for years to come. And as droughts seem to be occurring more frequently in rainforests, scientists worry that these important carbon sinks may instead become carbon sources. In a study published recently in Nature, scientists at NASA's Jet Propulsion Laboratory used lidar data captured by satellites to map changes in forest canopy in the Amazon following a particularly severe drought in 2005. Lidar, which stands for "Light Detection and Ranging" uses lasers to measure distances and create three-dimensional representations of surface features like canyons, craters, and, in this case, trees.

More growth, less warming The only way to get dangerous global warming is to assume stagnation Here's a version of the article I published in the Financial Post this week with added links: The debate over climate change is horribly polarized. From the way it is conducted, you would think that only two positions are possible: that the whole thing is a hoax or that catastrophe is inevitable. In fact there is room for lots of intermediate positions, including the view I hold, which is that man-made climate change is real but not likely to do much harm, let alone prove to be the greatest crisis facing humankind this century.

From carbon sink to source: Brazil puts Amazon, Paris goals at risk Brazil is committed to cutting carbon emissions by 37 percent from 2005 levels by 2025, to ending illegal deforestation, and restoring 120,000 square kilometers of forest by 2030. Scientists warn these Paris commitments are at risk due to a flood of anti-environmental and anti-indigenous measures forwarded by President Michel Temer.“If these initiatives succeed, Temer will go down in history with the ruralistas as the ones who put a stake in the beating heart of the Amazon.” — Thomas Lovejoy, conservation biologist and director of the Center for Biodiversity and Sustainability at George Mason University.“The Temer government’s reckless behavior flies in the face of Brazil’s commitments to the Paris Agreement.” — Christian Poirier, program director at Amazon Watch.

China's president says the world must work together on climate change China's president has said the world needs to work together to balance economic development and the destruction of the natural world. It comes just a week after Xi Jinping promised China - the world's worst polluter and an economic super power - would be carbon neutral by 2060. In another landmark speech, he told the UN biodiversity summit: "At present there exists an acceleration of the global extinction of species. "The loss of biodiversity and degradation of the ecosystem pose a major risk to human survival and development. "It falls to all of us to act together. We need to respect nature, follow its laws and protect it.

Alarm as study reveals world’s tropical forests are huge carbon emission source The world’s tropical forests are so degraded they have become a source rather than a sink of carbon emissions, according to a new study that highlights the urgent need to protect and restore the Amazon and similar regions. Researchers found that forest areas in South America, Africa and Asia – which have until recently played a key role in absorbing greenhouse gases – are now releasing 425 teragrams of carbon annually, which is more than all the traffic in the United States. This is a far greater loss than previously thought and carries extra force because the data emerges from the most detailed examination of the topic ever undertaken. The authors say their findings – published in the journal Science on Thursday – should galvanise policymakers to take remedial action. “This shows that we can’t just sit back.

What China's plan for net-zero emissions by 2060 means for the climate When I first moved to China in 1990, winter meant coal. The moment Beijing turned on the municipal heating system, our faces would become covered with soot. People stockpiled loose coal in huge piles outside their homes for heating and cooking. I could see the smokestacks of four large coal power plants and the country’s largest steel mill in the distance. China’s addiction to this most carbon-intensive of fossil fuels made the prospect of a country dedicated to fighting climate change seem fanciful.

METEO 469: From Meteorology to Mitigation: Understanding Global Warming D7 As we saw earlier in the course, the airborne fraction of CO2 in the atmosphere has increased by only half as much as it should have given the emissions we have added through fossil fuel burning and deforestation. We know that CO2 must be going somewhere. Figure 8.8: Annual change in atmospheric CO2 concentrations. Global heating threatens UK wildlife’s ability to adapt and survive Global heating is shifting Britain’s climatic zones by up to 5km each year, outpacing wildlife’s ability to adapt and survive, according to a new report by Rewilding Britain. If species cannot adapt to higher temperatures or relocate elsewhere, they will be threatened with extinction. But research by the rewilding charity suggests that restoring and connecting species-rich wild habitat across 30% of Britain’s land and sea by 2030 could save a fifth of species from climate-driven habitat loss, decline or extinction.

'Tipping points' could exacerbate climate crisis, scientists fear Key dangers largely left out of the IPCC special report on 1.5C of warming are raising alarm among some scientists who fear we may have underestimated the impacts of humans on the Earth’s climate. The IPCC report sets out the world’s current knowledge of the impacts of 1.5C of warming and clearly shows the dangers of breaching such a limit. However, many scientists are increasingly worried about factors about which we know much less. These “known unknowns” of climate change are tipping points, or feedback mechanisms within the climate system – thresholds that, if passed, could send the Earth into a spiral of runaway climate change.

Extreme weather highlights Southeast Asia's vulnerability to climate change The region faces the threat of increasing natural disasters as global warming makes extreme weather more likely. By Zachary Frye Over the past several weeks, parts of Southeast Asia have been pummeled by severe storms. Widespread flooding across the region, especially in Vietnam, left hundreds of thousands of residents temporarily displaced. In Vietnam alone, at least 90,000 people were forced from their homes during the first several weeks of October after two heavy tropical storms, Linfa and Nangka, hit the country just days apart. In the Philippines, tropical storm Saudel made landfall on October 20 and subsequently formed into a typhoon, leading to further flooding in Vietnam.

6A: Down to the Deep - The Ocean's Biological Pump Part A: Down to the Deep - The Ocean's Biological Pump Oceans have a large capacity to absorb CO2, thus reducing the amount of CO2in the atmosphere and bringing carbon atoms into the ocean system. Many CO2 molecules that diffuse into sea surface waters diffuse back to the atmosphere on very short time scales. However, some of the carbon atoms from these original CO2 molecules stay in the ocean for time scales of hundreds to thousands of years. If some carbon atoms eventually make it to the bottom of the ocean sediment, they can be stored for time scales of millions of years. The Ocean Carbon Cycle. Matt Ridley: Global Warming Versus Global Greening The Royal Society, London 17 October 2016 Matt Ridley delivers the 2016 Annual GWPF Lecture at the Royal Society, London 17 October I am a passionate champion of science. I have devoted most of my career to celebrating and chronicling scientific discovery.

Exactly right Eve - there are real signs that the scientific evidence has been known for many years, but politicians have refused to take sufficient action. There's a strong chance that the recent Brazilian elections could see things get even worse, given what Brazil's new right wing President Jair Bolsanaro has had to say on climate change and the rainforest. For example, take a look at this: by drwhittall Oct 30

It annoys me that these IPCC talks have so much emphasis when countries that have agreed to it don’t or can’t control it or drop out of the agreement. The agreement itself is so so important but some countries involved don’t seem to see the severity of what they’re doing like Donald Trump who until recently claimed that climate change and global warming were all fake news! by eveplant1 Oct 30