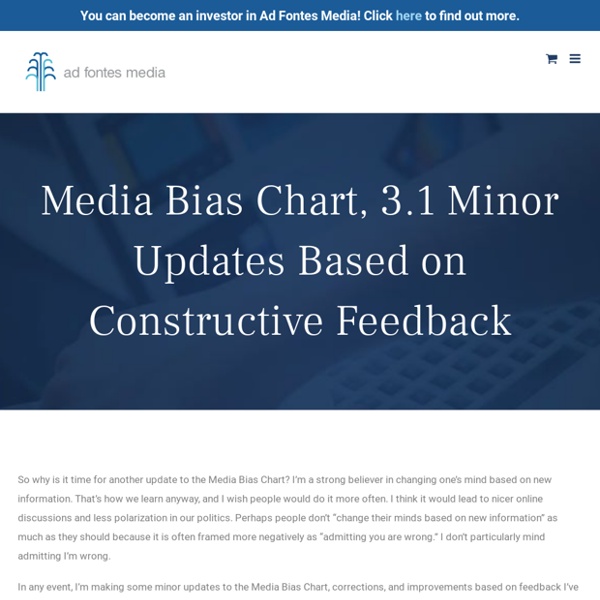 So why is it time for another update to the Media Bias Chart? I’m a strong believer in changing one’s mind based on new information. That’s how we learn anyway, and I wish people would do it more often. I think it would lead to nicer online discussions and less polarization in our politics. Perhaps people don’t “change their minds based on new information” as much as they should because it is often framed more negatively as “admitting you are wrong.” I don’t particularly mind admitting I’m wrong. In any event, I’m making some minor updates to the Media Bias Chart, corrections, and improvements based on feedback I’ve gotten. The Media Bias Chart Updates Here are the changes for version 3.1. The middle column now says “Neutral: Minimal Partisan Bias OR Balance of Biases.” What has moved? I am writing a separate post that more specifically defines the horizontal axis and the criteria for ranking sources within them. I have moved Natural News from the extreme left to slightly right.

More acidic oceans 'will affect all sea life' Image copyright JAGO-TEAM/GEOMAR All sea life will be affected because carbon dioxide emissions from modern society are making the oceans more acidic, a major new report will say. The eight-year study from more than 250 scientists finds that infant sea creatures will be especially harmed. It’s not politics or religion separating humans; it’s shame stocksy Once, after delivering a lecture at Berkeley in the 1960s, a psychologist took questions from the audience. A young woman stood up to explain that she understood the deep connection between people and the collective responsibility that we all shared for the world, but she didn’t know what to do next. The psychologist answered, “Find the others.” In this day and age, how do we “find the others” — that is, find the people with whom we can connect more directly?

7 Image Search Tools That Will Change Your Life Although Google has been playing with some fun image search toys in its lab and the official Google Image Search has recently significantly upped its game, some of its most hyped features — color search, instant scrolling, hover preview — are but mere shadows of sleeker, better versions that geekier, more sophisticated image search tools offer. Here are seven of our favorites. oSkope is a visual search assistant that lets you browse images and products from popular sites like Amazon, eBay, YouTube and Flickr in a highly intuitive way.

Don't be fooled by fake images and videos online One month before the 2016 U.S. presidential election, an “Access Hollywood” recording of Donald Trump was released in which he was heard lewdly talking about women. The then-candidate and his campaign apologized and dismissed the remarks as harmless. At the time, the authenticity of the recording was never questioned.

The Best Emergency Preparedness Supplies for 2019: Reviews by Wirecutter The key tools to have on hand for an emergency—everything from an atlas to good duct tape—are also key tools to have on hand for life in general. A common theme that we noticed in this category is that while a great tool can be a genuine joy to use and serve you well for years (if not decades), cheap imitators will waste both your money and your time. Go for the good stuff. —KT Gas shut-off tool If you smell, hear, or see evidence of a gas leak in the aftermath of an earthquake or some other disaster, your first priority is to turn your gas off. Study: Religious fundamentalists and dogmatic individuals are more likely to believe fake news New research provides evidence that delusion-prone individuals, dogmatic individuals, and religious fundamentalists are more likely to believe fake news. The study, which appears in the Journal of Applied Research in Memory and Cognition, suggests that the inability to detect false information is related to a failure to be actively open-minded. The rise of online social media has led to growing concerns about the spread of unsubstantiated rumors, misleading political propaganda, and blatantly false articles designed to create viral web traffic. Even the U.S.

1,150 Free Movies Online: Great Classics, Indies, Noir, Westerns Advertisment Watch 1,150 movies free online. Includes classics, indies, film noir, documentaries and other films, created by some of our greatest actors, actresses and directors. The collection is divided into the following categories: Comedy & Drama; Film Noir, Horror & Hitchcock; Westerns (many with John Wayne); Martial Arts Movies; Silent Films; Documentaries, and Animation. The 12 cognitive biases that prevent you from being rational The human brain is capable of 1016 processes per second, which makes it far more powerful than any computer currently in existence. But that doesn't mean our brains don't have major limitations. The lowly calculator can do math thousands of times better than we can, and our memories are often less than useless — plus, we're subject to cognitive biases, those annoying glitches in our thinking that cause us to make questionable decisions and reach erroneous conclusions. Here are a dozen of the most common and pernicious cognitive biases that you need to know about. Before we start, it's important to distinguish between cognitive biases and logical fallacies. A logical fallacy is an error in logical argumentation (e.g. ad hominem attacks, slippery slopes, circular arguments, appeal to force, etc.).