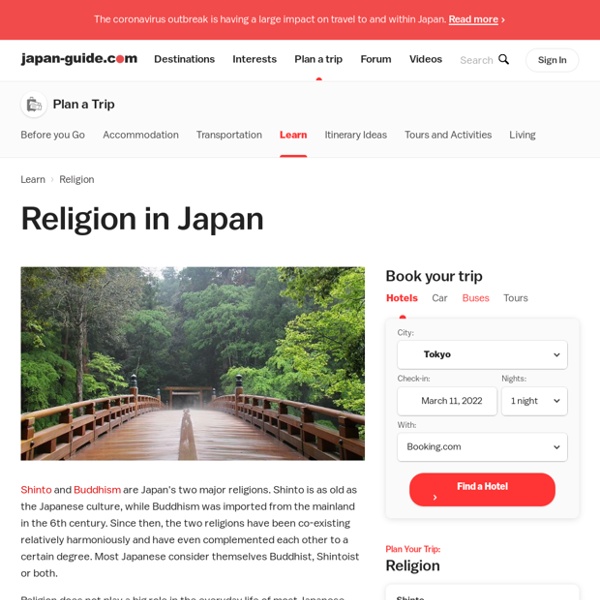 Shinto and Buddhism are Japan's two major religions. Shinto is as old as the Japanese culture, while Buddhism was imported from the mainland in the 6th century. Since then, the two religions have been co-existing relatively harmoniously and have even complemented each other to a certain degree. Most Japanese consider themselves Buddhist, Shintoist or both. Religion does not play a big role in the everyday life of most Japanese people today. The average person typically follows the religious rituals at ceremonies like birth, weddings and funerals, may visit a shrine or temple on New Year and participates at local festivals (matsuri), most of which have a religious background. Religions and Philosophies Other Religion Related Pages

Government - Explore Japan - Kids Web Japan - Web Japan The National Diet Building (AFLO) Japan's Constitution, which came into force in 1947, is based on three principles: sovereignty of the people, respect for fundamental human rights, and renunciation of war. The Constitution also stipulates the independence of the three branches of government - legislative (the Diet), executive (the cabinet), and judicial (the courts). A plenary session of the Diet (House of Councillors) The Diet, Japan's national parliament, is the highest organ of state power and the sole law-making organ of the state. The Diet comprises the 465-seat House of Representatives (lower house) and the 248-seat House of Councillors (upper house).

The Languages spoken in Japan Japan, often referred to as the State of Japan, is an island nation in the Eastern portion of the Asian continental waters. Located in the expansive Pacific Ocean, the country is situated to the east of the Sea of Japan, China, North Korea, South Korea and Russia, stretching from the Sea of Okhotsk in the north to the East China Sea and Taiwan in the south. The Japanese characters that make up Japan's name mean "sun-origin", which is why Japan is often referred to as the "Land of the Rising Sun. Japan is an archipelago consisting of 6,852 islands. The four largest of these islands, Honshu, Hokkaido, Kyushu, and Shikoku, comprise about ninety-seven percent of Japan's total land area. Japanese Language - Structure, Writing & Alphabet - MustGo Irasshai-masu- Welcome There have been numerous attempts to establish a genetic relationship between Japanese and other languages and language families. The most popular theory is that Japanese, like Korean, is a member of the Altaic language family. This suggests that Japanese and Korean are related, although extremely remotely.

Western culture and the end of Japanese 'harmony' Japan grew up with wa (harmony). Conflict and competition are the creative engines of Western civilization; Japan traveled a different route to the tumultuous present. Wa breathes the sanctity of ancient roots. It is enshrined in a “constitution” dating back to A.D. 604, attributed to Prince Shotoku Taishi, who decreed: “Wa should be valued and quarrels avoided … .

General Information on Climate of Japan Japan has four distinct seasons with a climate ranging from subarctic in the north to subtropical in the south. Conditions are different between the Pacific side and the Sea of Japan side. Northern Japan has warm summers and very cold winters with heavy snow on the Sea of Japan side and in mountainous areas. The Japanese Climate From subarctic Hokkaidō to subtropical Okinawa, Japan’s climate varies greatly by region. Snow in the North, Blossoms in the South When Hokkaidō in northern Japan is still buried in snow in January, cherry blossoms come into full bloom in the southern islands of Okinawa. Stretching like a bow off the east of the Eurasian continent, the Japanese archipelago shows great climatic variation within its approximately 3,000 kilometers of length from northeast to southwest.

What Type Of Government Does Japan Have? Japan's government is a constitutional monarchy where the Emperor's power is limited to mainly ceremonial duties. The government has three branches: the executive, legislature, and the judiciary. The Emperor is the Head of State and the imperial family. His position does not influence the activities of the government in any way. What prompted Japan's aggression before and during World War II? This question originally appeared on Quora. Answer by Harold Kingsberg: The short version: Japan’s actions from 1852 to 1945 were motivated by a deep desire to avoid the fate of 19th-century China and to become a great power. For Japan, World War II grew from a conflict historians call the Second Sino-Japanese War. The Second Sino-Japanese War began in earnest in 1937 with a battle called the Marco Polo Bridge Incident.

Japan Geography Location Japan consists of several thousands of islands, of which Honshu, Hokkaido, Kyushu and Shikoku are the four largest. Japan's closest neighbors are Korea, Russia and China. Ancient Egyptian Gods and Goddesses Illustrated Descriptions and stories Egyptian Gods Ancient Egyptian Gods and Goddesses For all ancient people, the world was filled with mystery. Much of what they experienced in the world around them was unknowable and frightening. The ancient Egyptian gods and goddesses represented aspects of the Egyptians’ natural and “supernatural” surroundings and helped them understand its many aspects. Demons Japanese mythology Japanese mythology, body of stories compiled from oral traditions concerning the legends, gods, ceremonies, customs, practices, and historical accounts of the Japanese people. Most of the surviving Japanese myths are recorded in the Kojiki (compiled 712; “Records of Ancient Matters”) and the Nihon shoki (compiled in 720; “Chronicles of Japan”). These works tell of the origin of the ruling class and were apparently aimed at strengthening its authority. Therefore, they are not pure myths but have much political colouring. They are based on two main traditions: the Yamato Cycle, centred around the sun goddess Amaterasu Ōmikami, and the Izumo Cycle, in which the principal character is Susanoo (or Susanowo) no Mikoto, the brother of Amaterasu.

Western culture and the end of Japanese 'harmony' Japan grew up with wa (harmony). Conflict and competition are the creative engines of Western civilization; Japan traveled a different route to the tumultuous present. Wa breathes the sanctity of ancient roots. It is enshrined in a “constitution” dating back to A.D. 604, attributed to Prince Shotoku Taishi, who decreed: “Wa should be valued and quarrels avoided … .

Tangaroa TANGAROA is the most important of the "departmental" gods of Polynesia. In his many cognates, he was worshiped by most Polynesians as the chief god and creator of the world. His popularity, however, depended chiefly on his role as ruler over the ocean. Egypt Population 2019 (Demographics, Maps, Graphs) Egypt, known officially as the Arab Republic of Egypt, is a transcontinental country which spans the southwest corner of Asia and the northeast corner of Africa. This is made possible through a land bridge formed by the Sinai Peninsula. Most of Egypt is located in North Africa. It is bordered by both land and sea: the Mediterranean is to its North, Israel and the Gaza Strip to the Northeast, the Gulf of Aqaba to its East, the Red Sea to the East and South, Libya to the West and Sudan to the South. Egypt is one of the most populous countries in Africa and the Middle East. With a 2019 estimated population of 100.39 million, Egypt ranks 14th in the world.