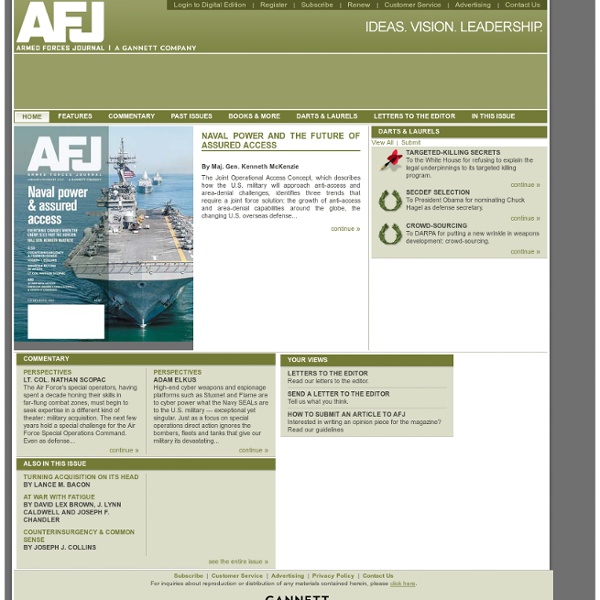 Army University Press Home Small Wars Journal Institute of Land Warfare Recent ILW & Torchbearer Publications The Emergence of Feral and Criminal Cities: U.S. Military Implications in a Time of Austerityby Robert J. Bunker (Land Warfare Paper 99W, April 2014) This Land Warfare Paper considers the nature of the emerging global security environment. Cyberspace as a Weapon System(Landpower Essay 14-1, March 2014) This Landpower Essay explains how the environment of cyberspace has become weaponized—numerous actors seeking to gain advantage over the United States through its asymmetric exposure to the cyber domain are already maneuvering and employing the Internet as a weapons platform to achieve their own ends. Comprehensive Soldier and Family Fitness: Building Resilience, Enhancing Performance(Torchbearer Issue Paper, March 2014) This Torchbearer Issue Paper reflects briefly on the missions that the Army has accomplished over the past 12 years. AUSA + 1st Session, 113th Congress = Some Good News(Torchbearer Special Report, February 2014) U.S. The U.S.

Defense Tech | The future of the Military, Law Enforcement and N U.S. military leaders have approved funding to develop a hybrid, stealth motorcycle to be driven by special operations teams in the not too distant future. The Defense Advanced Research Projects Agency has issued a grant to integrate a multiple fuel, hybrid-electric power plant into a dirt bike built by BRD Motorcycles. The hybrid electric engine will be built by Logos Technologies. DARPA leaders forsee an electric bike that can drive for an extended range while producing nearly zero engine noise. Tagged as: DARPA, motorcycle The Littoral Combat Ship program was one of the leading topics at the Sea Air Space Exposition outside Washington D.C. last week as Navy leaders continued to protect it from critics who said the ship is not built for the correct mission sets. The Navy’s director of surface warfare, Rear Adm. Tagged as: Littoral Combat Ship, Navy The 44-foot long submarine-launched missiles have been serving on Ohio-class submarines for 25 years, Vice Adm.

SSI Publications - Military Strategy, National Security, and Regional Security Index of Commentaries & Replies in Parameters Cunningham, G. K. Warren, Jason W. Wood, Dakota L. Becker, Jeff. Blank, Stephen. Bolan, Christopher J. Greentree, Todd. Mason, Chris. Mayer, Christopher. Mewett, Christopher. Stripes - Independent U.S. military news from Iraq, Afghanistan and bases worldwide Special Ops' burden of success By Adam Levine If there was any question that the Obama administration sees the shadowy world of special operations as an instrumental element in their vision for the military's future, the drama around the State of the Union and the speech itself removed any such doubt. That point will be driven home further on Thursday when Secretary of Defense Leon Panetta reveals the first details of its budget decisions to deal with half a trillion dollar in cuts over the next 10 years. It was the heroics of the Navy SEAL team's killing of Osama bin Laden that Obama used to open and close his State of the Union speech. These elite troops operate in daring and dangerous ways, and the administration sees them as an integral part of the military's future with a continued focus on counterterrorism. The teams are hard to generate given their skills and the support staff needed to make the operations possible. The return on investment is great, noted current commander Adm.

TR Defence | Turkish Military News, Strategy & Geopolitics Portal U.S. special forces rescue Somalia aid workers U.S. State Department was in close contact with Denmark about the raidRescued American's father was "flabbergasted" when Obama called him with the newsPrime Minister Raila Odinga of neighboring Kenya says he backs more U.S. action in SomaliaJessica Buchanan and Poul Thisted were kidnapped in October in Somalia Washington (CNN) -- U.S. The nine gunmen holding the hostages -- an American and a Dane -- were killed, the officials said. Jessica Buchanan, 32, and Poul Thisted, 60, had been held since October 25, when they were abducted in Galkayo, central Somalia, after they visited humanitarian projects, said the Danish Refugee Council, the agency for which they worked. Neither was harmed, the aid group said. They were taken to a regional medical facility, Pentagon spokesman George Little said Wednesday. "They are not hospitalized," said Andreas Kamm, secretary-general of the Danish Refugee Council, so "we take it as a sign that they're OK." Obama to Panetta: 'Good job' on rescue Capt.