4 Ways Fred Trump Made Donald Trump and His Siblings Rich 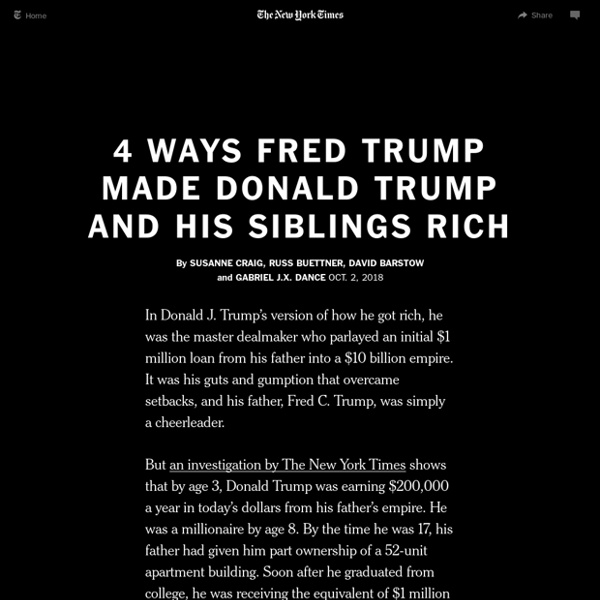 In Donald J. Trump’s version of how he got rich, he was the master dealmaker who parlayed an initial $1 million loan from his father into a $10 billion empire. It was his guts and gumption that overcame setbacks, and his father, Fred C. Trump, was simply a cheerleader. But an investigation by The New York Times shows that by age 3, Donald Trump was earning $200,000 a year in today’s dollars from his father’s empire. He was a millionaire by age 8. In all, financial records reveal, Mr. Here are four ways that Fred Trump made his children rich. Fred Trump made his son not just his salaried employee but also his property manager, landlord, consultant and banker. Fred Trump provided money for Donald Trump’s car, money for his employees, money to buy stocks, money for his first Manhattan offices and money to renovate those offices. The biggest payday Donald Trump ever got from his father came long after Fred Trump’s death.

Related:  Economics and Inequality • Malevolent immoral LIAR • Who has Economic opportunity • Fat Fraud Sits on a Mountain of Lies

What billionaires want: the secret influence of America’s 100 richest If we judge US billionaires by their most prominent fellows, they may seem to be a rather attractive bunch: ideologically diverse (perhaps even tending center-left), frank in speaking out about their political views, and generous in philanthropic giving for the common good – not to mention useful for the goods and jobs they have helped produce. The very top titans – Warren Buffett, Jeff Bezos, Bill Gates – have all taken left-of-center stands on various issues, and Buffett and Gates are paragons of philanthropy. The former New York mayor Michael Bloomberg is known for his advocacy of gun control, gay rights, and environmental protection. George Soros (protector of human rights around the world) and Tom Steyer (focused on young people and environmental issues) have been major donors to the Democrats.

A wild baby trust fund plan would give US kids up to $60,000 at birth Education is often considered the great equalizer, the tonic that will erase all injustice and inequality. As Nelson Mandela once said, "Education is the most powerful weapon which you can use to change the world." But an economist is calling for a fact-check on the old advice to stay in school and study hard. Trump Engaged in Suspect Tax Schemes as He Reaped Riches From His Father President Trump participated in dubious tax schemes during the 1990s, including instances of outright fraud, that greatly increased the fortune he received from his parents, an investigation by The New York Times has found. Mr. Trump won the presidency proclaiming himself a self-made billionaire, and he has long insisted that his father, the legendary New York City builder Fred C.

1% Won't Owe Social Security Tax After 2019 click 2x Without question, Social Security is this country's most important social program. It can rightly be called a financial rock for millions of elderly Americans, with the benefits provided accounting for more than half of all monthly income for 62% of retired workers and the program single-handedly keeping 15.3 million of those aged beneficiaries above the federal poverty line. But it's also a heavily criticized program for the way it collects revenue. Image source: Getty Images. Social Security's primary sources of funding, explained

As a black nurse, I see the crushing racial inequality across the NHS. This has to stop Some years ago a fellow black nurse said to me that I had been described by a nursing leader as “the only acceptable black nurse”. I’d like to say we’ve come a long way since then, but the enormous ethnic pay gap in the NHS shows there’s a long road yet to travel. As revealed last week, black doctors and nurses are on average paid thousands of pounds less than their white colleagues. There are still those who divide our workforce between “acceptable” and “unacceptable”. I’ve spent a lifetime on the NHS frontline, and overcame these barriers and prejudices to reach the top of my profession. 11 Takeaways From The Times’s Investigation Into Trump’s Wealth Tax records also reveal that at the peak of Mr. Trump’s financial distress, in 1990, his father extracted an extraordinary sum — nearly $50 million — from his empire. While The Times could find no evidence that Fred Trump made any significant debt payments, charitable donations or personal expenditures, there are indications that he wanted plenty of cash on hand to bail out his son if need be.

How US billionaires are fuelling the hard-right cause in Britain Dark money is among the greatest current threats to democracy. It means money spent below the public radar, that seeks to change political outcomes. It enables very rich people and corporations to influence politics without showing their hands. Among the world’s biggest political spenders are Charles and David Koch, co-owners of Koch Industries, a vast private conglomerate of oil pipelines and refineries, chemicals, timber and paper companies, commodity trading firms and cattle ranches.

Privatisation Harms Poor and Needy, Says UN Poverty Expert Widespread privatisation of public goods in many societies is systematically eliminating human rights protections and further marginalising those living in poverty, according to a hard-hitting new report. The report was transmitted to the UN General Assembly on 19 October. Philip Alston, the UN Special Rapporteur on extreme poverty and human rights, criticised the extent to which the World Bank, the International Monetary Fund, and even the UN itself have aggressively promoted widespread privatisation of basic services, without regard to the human rights implications or the consequences for the poor. He also criticised human rights groups for not responding strongly enough to the resulting challenges. “Privatising the provision of criminal justice, social protection, prisons, education, basic healthcare and other essential public goods cannot be done at the expense of throwing rights protections out of the window,” Alston said. Privatisation is for Profit not Equity

Fact-checking misinformation about the migrant caravan Misinformation about a migrant caravan heading to the United States is spreading on Facebook and other social media platforms with users sharing false or misleading memes and posts that paint a skewed version of the facts. PolitiFact has fact-checked many of those claims. A hurricane about to strike the caravan? False. The trouble with charitable billionaires In February 2017, Facebook’s founder and CEO Mark Zuckerberg was in the headlines for his charitable activities. The Chan Zuckerberg Initiative, founded by the tech billionaire and his wife, Priscilla Chan, handed out over $3m in grants to aid the housing crisis in the Silicon Valley area. David Plouffe, the Initiative’s president of policy and advocacy, stated that the grants were intended to “support those working to help families in immediate crisis while supporting research into new ideas to find a long-term solution – a two-step strategy that will guide much of our policy and advocacy work moving forward”. This is but one small part of Zuckerberg’s charity empire.

Macron condemned the rise of nationalism in front of Trump and Putin, warning that 'old demons are reawakening' PARIS (Reuters) - French President Emmanuel Macron used an address to world leaders gathered in Paris for Armistice commemorations on Sunday to send a stern message about the dangers of nationalism, calling it a betrayal of moral values. With US President Donald Trump and Russian President Vladimir Putin sitting just a few feet away listening to the speech via translation earpieces, Macron denounced those who evoke nationalist sentiment to disadvantage others. "Patriotism is the exact opposite of nationalism: nationalism is a betrayal of patriotism," Macron said in a 20-minute address delivered from under the Arc de Triomphe to mark the 100th anniversary of the end of World War One. "By pursuing our own interests first, with no regard to others', we erase the very thing that a nation holds most precious, that which gives it life and makes it great: its moral values." There was no immediate response from either the White House or the Kremlin to Macron's comments.

Trump will personally save up to $15m under tax bill, analysis finds Donald Trump and six members of his inner circle will be big winners of the Republicans’ vast tax overhaul, with the president personally benefiting from a tax cut of up to $15m a year, research shows. The US president chalked up his first big legislative win on Wednesday with the $1.5tn bill, the most sweeping revamp of the tax code in three decades, slashing taxes for corporations and the wealthy and dealing the heaviest blow yet to Obamacare. But analysis by a leading Washington thinktank, the Center for American Progress (CAP), finds that changes to business rules will save Trump roughly $11m to $15m per year, while an amendment to the estate tax – the tax on the transfer of an estate of a deceased person – would potentially save his heirs $4.5m. Under current law, the first $11.2m of a couple’s estate’s value is excluded from taxation, and any amount above this is taxed at a 40% rate. The new bill doubles the exemption to $22.4m.

Related:
Related:  Economics and Inequality   -  Malevolent immoral LIAR   -  Who has Economic opportunity   -  Fat Fraud Sits on a Mountain of Lies