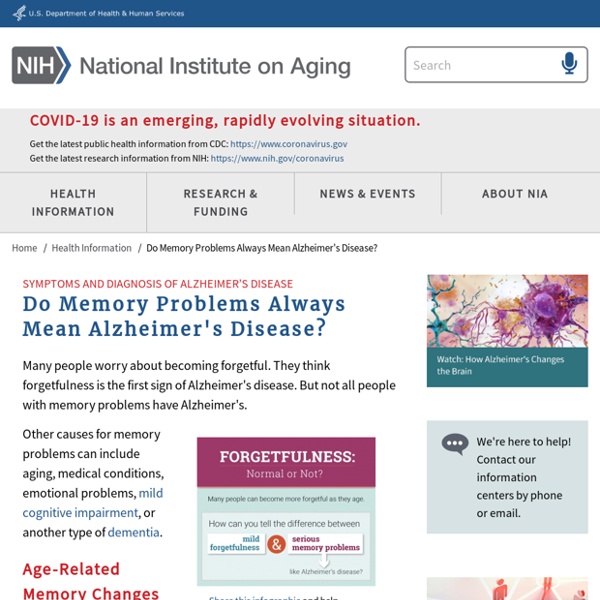 Many people worry about becoming forgetful. They think forgetfulness is the first sign of Alzheimer's disease. But not all people with memory problems have Alzheimer's. Other causes for memory problems can include aging, medical conditions, emotional problems, mild cognitive impairment, or another type of dementia. Age-Related Memory Changes Forgetfulness can be a normal part of aging. Memory Loss Related to Medical Conditions Certain medical conditions can cause serious memory problems. Tumors, blood clots, or infections in the brain Some thyroid, kidney, or liver disorders Drinking too much alcohol Head injury, such as a concussion from a fall or accident Medication side effects Not eating enough healthy foods, or too few vitamins and minerals in a person's body (like vitamin B12) A doctor should treat serious medical conditions like these as soon as possible. Memory Loss Related to Emotional Problems Learn more about Alzheimer's disease from MedlinePlus. Read about this topic in Spanish.

Age-Related Memory Loss: What's Normal, What's Not, and When to Seek Help Worried about your forgetfulness? Learn what’s normal when it comes to memory and aging, and how to recognize the signs of more serious problems. Memory and aging We’ve all misplaced keys, blanked on someone’s name, or forgotten a phone number. When you’re young, you don’t tend to pay much attention to these lapses, but as you grow older, you may worry about what they mean. The Top 10 Causes of Death Of the 56.9 million deaths worldwide in 2016, more than half (54%) were due to the top 10 causes. Ischaemic heart disease and stroke are the world’s biggest killers, accounting for a combined 15.2 million deaths in 2016. These diseases have remained the leading causes of death globally in the last 15 years. Dementia Many older people worry about becoming more forgetful. They think forgetfulness is the first sign of Alzheimer's disease. In the past, memory loss and confusion were considered a normal part of aging. However, scientists now know that most people remain both alert and able as they age, although it may take them longer to remember things. A lot of people experience memory lapses.

The Non-Alzheimer’s Causes Of Memory Loss As we and our loved ones age, it’s reasonable to occasionally forget things—we all do it at some points. However, memory loss, which is defined as “unusual forgetfulness” in both short-term and long-term functions, is not. Memory loss is often automatically associated with Alzheimer’s disease, a medical issue that impacts over five million Americans every year. Memory loss may be a primary symptom of Alzheimer’s, but just because an elderly person is experiencing memory loss, it does not mean he or she has the disease. There are often outside forces and other brain diseases that fuel the degrading of the brain’s cognition. “The indications are that, in the absence of disorders due to trauma or neurological disease, the human brain has the capacity to store almost unlimited amounts of information indefinitely,” one site dedicated to memory loss stated.

Cognitive Skills & Normal Aging Normal Amount of Cognitive Decline A commonly held misconception is that aging results in an inevitable loss of all cognitive abilities and that nothing can be done to halt this decline. Research, however, does not support these claims. While certain areas of thinking do show a normal decline as we age, others remain stable. Dementia - Symptoms, Stages, Treatment & Prevention Dementia is a syndrome – usually of a chronic or progressive nature – in which there is deterioration in cognitive function (i.e. the ability to process thought) beyond what might be expected from normal ageing. It affects memory, thinking, orientation, comprehension, calculation, learning capacity, language, and judgement. Consciousness is not affected. The impairment in cognitive function is commonly accompanied, and occasionally preceded, by deterioration in emotional control, social behaviour, or motivation.

Slower memory retrieval of information A team at Tübingen University in Germany programmed a computer to read a certain amount each day and learn new words and commands. When the researchers let a computer “read” only so much, its performance on cognitive tests resembled that of a young adult. But if the same computer was exposed to the experiences we might encounter over a lifetime – with reading simulated over decades – its performance now looked like that of an older adult. Often it was slower, but not because its processing capacity had declined. Rather, increased “experience” had caused the computer’s database to grow, giving it more data to process – which takes time.

Confusion and Memory Problems in Older People Increasing confusion in elderly clients can be puzzling, not only for them, but also for you as a caregiver. Establishing if their change in condition is permanent or an acute episode will help you to decide on the right approach and plan of action. Knowing your client will give you some indication of their basic memory ability and general day to day functioning. A major cause of age-related memory loss identified: Potentially reversible A team of Columbia University Medical Center (CUMC) researchers, led by Nobel laureate Eric R. Kandel, MD, has found that deficiency of a protein called RbAp48 in the hippocampus is a significant contributor to age-related memory loss and that this form of memory loss is reversible. The study, conducted in postmortem human brain cells and in mice, also offers the strongest causal evidence that age-related memory loss and Alzheimer's disease are distinct conditions. The findings were published today in the online edition of Science Translational Medicine.

Protecting against cognitive decline While there's currently no treatment that can prevent or cure dementia, researchers have identified some factors that may help protect you from cognitive decline. Exercise Exercise offers an impressive array of health benefits. It helps prevent heart disease and type 2 diabetes; lowers the risk for high blood pressure, colon cancer, and breast cancer; and helps relieve insomnia, anxiety, and depression.