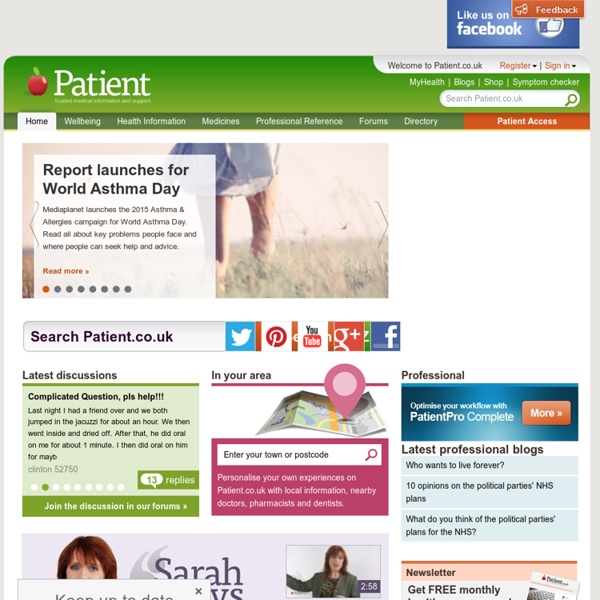 MedicineNet.com - We Bring Doctor's Knowledge to You One Of The World's Top Aging Researchers Has A Pill To Keep You Feeling Young Say someone came up to you selling a dietary supplement—a pill that you take once a day—that could boost your energy, improve your body’s ability to repair its DNA, and keep you healthier as you get older. It might sound like a scam, or more likely just another in a sea of confusing, undifferentiated claims that make up the $20 billion dollar supplement industry. But let’s say that someone is MIT’s Lenny Guarente, one of the world’s leading scientists in the field of aging research. The Scientist And The Startup Cofounding a supplement company seems an unlikely career move for someone like Guarente, a man who is one of the most well-respected scientists in his field. "My biggest hope is that we can make available to people something that is currently unavailable, and that it will have a positive impact on their health," Guarente says. "The fundamental question was: Are there other natural products out there that could be meaningful? The Future Of Dietary Supplements

Equator > Home County Health Rankings & Roadmaps Meditation is an Effective Treatment for Depression, Anxiety and Pain Data from 47 different clinical trials finds meditation is as effective as antidepressants. A medical journal review has found that just 30 minutes daily meditation can improve the symptoms of depression, anxiety and pain. The research, published in the Journal of the American Medical Association, included studies with a total of 3,515 participants (Goyal et al., 2014). All of the research involved active control groups so it was possible to discount the placebo effect. The placebo effect occurs when people expect to get better–sometimes simply as a result of being in a study–and so they do. Studies with active control groups, though, can help discount the placebo effect as the treatment can be compared with a group who have similar expectations. Meditation is more than relaxation Participants in this review had had at least 4 hours of instruction in a form of meditation, such as mindfulness or mantra-based programs. Madhav Goyal M.D. explained: No side-effects Image credit: c_liecht

Tips for using Healthplanfinder | Local News Originally published September 21, 2013 at 8:08 PM | Page modified September 26, 2013 at 4:11 PM If you’re in the market for a new health-insurance plan, you’ll want to go directly to www.wahealthplanfinder.org. That’s the Washington Healthplanfinder site developed by the Washington Health Benefit Exchange, the public-private company set up by the Legislature to manage the health-insurance marketplace in Washington state under the Affordable Care Act. The first thing most people will want to access on the site is the cost-estimate calculator, a tool to help you figure out how much you’re likely to pay for insurance. On the Healthplanfinder home page, simply click on the Go To Calculator button under the calculator icon on the right side of the page. As you’ll see, the calculator offers three main data fields: Household Information, Enrollee Information and Monthly Cost. In the Household Information section you are prompted to enter the number of people in your household to be insured.

8 carriers, many health plans make for lots of choices | Local News The centerpiece of the Affordable Care Act is the establishment of online insurance marketplaces, called exchanges, where the uninsured and those seeking individual insurance plans can find and purchase a plan that suits them. In Washington state, the exchange, called the Washington Healthplanfinder, has eight insurance carriers offering a total 46 plans (as well as several dental plans and one plan for small businesses). The state Office of the Insurance Commissioner approved the carriers and their plans, and the Washington Health Benefit Exchange certified them. Here’s a rundown of the carriers. BridgeSpan Health Background: Subsidiary of Cambia Health Solutions (formerly The Regence Group), also the parent company of Regence Blue Shield of Washington. Exchange offers: Three individual health plans (gold, silver and bronze). Plan types: PPO and HSA-qualified High Deductible Health Plan. Counties covered: King, Kitsap, Pierce, Skagit, Snohomish, Thurston and Spokane. Plan types: PPO.

A user's guide: 20 things to know about the Affordable Care Act | Local Pages hat do you need to know about the Affordable Care Act, aka Obamacare, the health-reform law or the “federal health-care overhaul”? It’s big, it’s far-reaching and, despite what you may have heard, it’s happening. And it will change many things about the way you get health care, whether or not you are one of the more than 1 million state residents currently uninsured, many of whom may benefit directly. Basically, the ACA’s aim is to begin to pull, push and persuade everyone to pile into the big “pool” — the insured. Nobody ever tried to argue that having no health insurance somehow magically keeps people from getting sick. This “cost-shifting” — getting someone else to pay the bills — has increased costs in many ways. A fairer way to do this, the proponents of the health-care law argued, is spreading the burden more widely. The picture of the near future isn’t all rosy. And cost remains one of the biggest issues — and one of the most serious criticisms of the federal law.