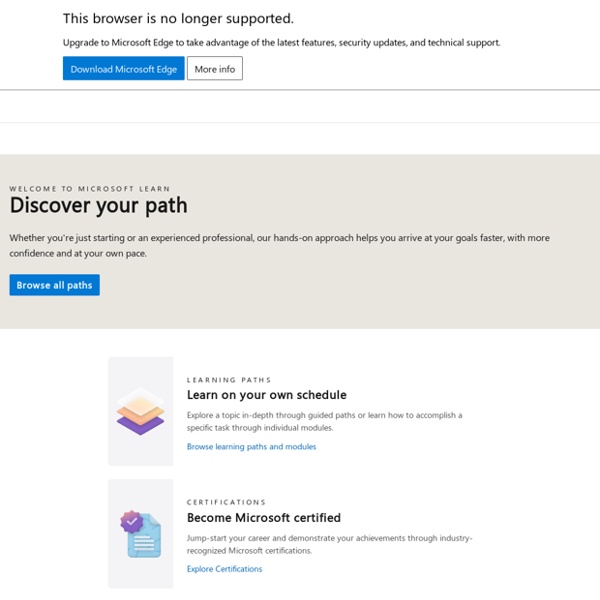 Learn How To #InventAnything At littleBits we believe in empowering more people around the world to be creators and not just consumers of technology. That is why we deeply care about supporting our community in their learning journey as makers. And starting today we are offering a FREE online course to help anyone around the world learn how to #InventAnything using littleBits. How to Become Superior To Others: 11 Steps Edit Article Edited by Maluniu, For How Long, Rob S, Tom Viren and 33 others Many humans were worshipped throughout history as gods. The Japanese emperors, the Egyptian pharaohs, the ancient Roman Emperors; all of them were official deities within their state religion, and yet there are very few who honor them as deities today (though a few who worship the Japanese Emperor as a deity still remain.)

Integrating Genially with Microsoft: Get the most out of it! We’ve got news! A new integration between Microsoft and Genially has just been launched. In addition to the different integration possibilities that already exist, such as using Genially with Teams or with OneNote, you can now integrate Genially with Word. From now on, your geniallys can be displayed in Word documents. Using Cordova Plugins in Ionic 2 with Ionic Native There’s been a lot of confusion around how to use Cordova plugins in Ionic 2, and I think a lot of that stems from ngCordova. This was a great little tool that simplified using native plugins in Ionic 1, it can not be used with Ionic 2. What ngCordova did was wrap the standard Cordova plugins to make them integrate better with Angular, and provide things like promise support, whereas vanilla Cordova plugins usually rely on callbacks. There’s a new service in Ionic 2 called Ionic Native which is pretty much a direct replacement for ngCordova.

How to Dual-boot Linux and Windows (on a PC with Windows 7 already installed) Prerequisites: 1. A PC running Windows 7, with at least 30 GB of free hard-drive space. 2. A CD/DVD burner and blank CD/ DVD or a USB drive with a capacity of 1GB or more 3. An external Harddrive big enough to backup your Windows installation 4. Administrative access to the PC 5.

Creativity on the Run: 18 Apps that Support the Creative Process "The intuitive mind is a sacred gift, the rational mind is a faithful servant. We have created a society that honors the servant and has forgotten the gift." - Albert Einstein We do not need to teach creativity, but rather inspire its daily practice. 11 of the Best Gmail Tools and Plugins Ever Gmail is an ad-powered email inbox. It’s easy, it looks great and it’s very versatile. Don’t you just love it? Best of 2018 - PhET PowerPoint Add-in This week is a vacation week for the vast majority of readers of this blog. As I do at this time every year, I'm going to republish some of the most popular posts of 2018. Here's one from April. Google reduces JPEG file size by 35% Google has developed and open-sourced a new JPEG algorithm that reduces file size by about 35 percent—or alternatively, image quality can be significantly improved while keeping file size constant. Importantly, and unlike some of its other efforts in image compression (WebP, WebM), Google's new JPEGs are completely compatible with existing browsers, devices, photo editing apps, and the JPEG standard. The new JPEG encoder is called Guetzli, which is Swiss German for cookie (the project was led by Google Research's Zurich office). Don't pay too much attention to the name: after extensive analysis, I can't find anything in the Github repository related to cookies or indeed any other baked good. There are numerous ways of tweaking JPEG image quality and file size, but Guetzli focuses on the quantization stage of compression. The difficult bit is finding a balance between removing detail, and keeping file size down.

Here’s What You Should Do For A First Date Based On Your Myers-Briggs Personality Type Everyone looks the most attractive when they’re in their element. And for many of the sixteen Myers-Briggs personality types, dinner and a movie just isn’t their element. Here are sixteen unique first date ideas that will highlight your natural strengths, based on your type. Bonus points if you figure out your date’s type and choose THEIR ideal activity. ISFP – Go to a flea market or bazaar. Scanning thermal camera The DIY thermographer is a camera which creates an image of what temperature things are -- a 'heat' camera. This approach has been put on hold in favor of the "thermal flashlight" technique which is now posted on the main Thermal Camera tool page We're making a 'scanning thermal imager' which means we just use a temperature sensor and sweep it back and forth across a scene, recording the temperature variation to build up an image that looks like this: There are two main parts to the project: the camera itself (currently made of Legos and an Arduino, and the website, thermographer.publiclaboratory.org, which helps you create an image from your recorded temperatures. Both are under development and we don't yet have a demo to show you. Check back soon!