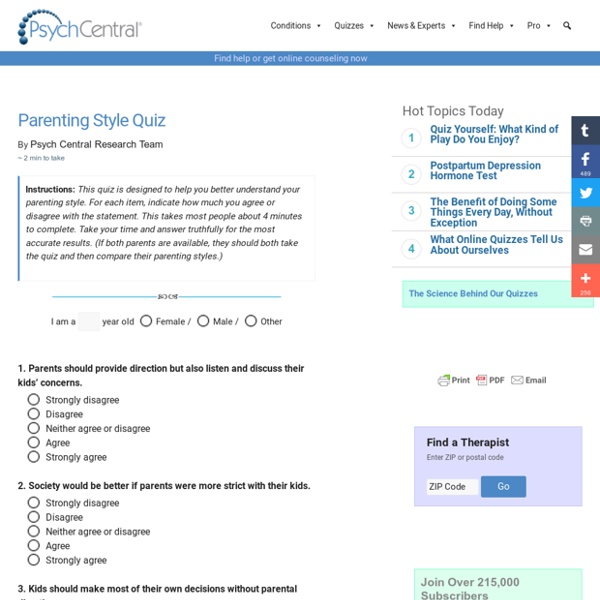 Instructions: This quiz is designed to help you better understand your parenting style. For each item, indicate how much you agree or disagree with the statement. This takes most people about 4 minutes to complete. Take your time and answer truthfully for the most accurate results. (If both parents are available, they should both take the quiz and then compare their parenting styles.) Psych Central Research Team Psych Central quizzes are developed by Dr. APA Reference Research Team, P. (2018).

Related:  4 Types of Parenting Styles and Their Effects on Children • What is your parenting style? • crystal_goh

Parenting styles observe in Singapore SINGAPORE: It really didn’t seem that long ago when the Stop at Two campaign was in full swing, warning parents in Singapore that “the more you have, the less they (each) get”. Yet, the challenge today isn’t to discourage families from having many children, but to coax or even cajole young Singaporeans to get married earlier and have them. Compared to a few decades before, family sizes are shrinking as new parents tend to have less children. Couples satisfy themselves with one or two kids being the norm, and three the exception. These days, the sex of the child is also of lesser importance.

Parenting Quiz - Active Parenting Differences in parenting styles are a problem for both parents and children. At the least, it invites kids to play one parent against the other in a smart attempt to get the answer that they want to hear. This is not the child’s fault. After all, a child is just using good common sense! However, it does create a situation in which rules are not clear or consistently enforced, which is bad for the child as well as for the parent. Parent-child connection crucial to well-being of young, Letters on the Web News We are deeply concerned that the number of suicides for male teenagers aged 10 to 19 hit a record high last year (Record 19 teenage boys committed suicide last year, July 30). Research has shown that young people with a strong and close relationship with their parents are more likely to also report lower levels of depressive symptoms, suicide thoughts, self-harm and conduct problems. Such youth were more likely to report higher levels of self-esteem and better use of their free time. Connectedness to parents has been found to be especially important for the well-being of the young. Parents, therefore, play a crucial role in protecting adolescents against the risk of suicide when they invest time and effort to build a stronger relationship with their teenagers.

How Positive Parenting Shapes the Brain Q&A sessions can feel a little like an out of body experience. You know, that sweaty palm feeling as your mind races around for just the right thing to say, while at the exact same moment you can still hear yourself talking about something else? That’s right about where I was when I was struck by a question that took me by surprise. Not because the question had been asked, but because no one had asked me that before.

Example of tailoring parenting style to individual child "At the time, I chafed at such rigid structures... Yet, looking back, I realise how this sort of parenting helped me become the person I am today. The supervision, discipline and structure helped give me a form of security in my life." By conventional standards, my mother would be labelled a strict parent. Some might even call her a "tiger mother", a term that refers to parents who are demanding and push their children to attain success.

Psychology Today Singapore From reading to infants to helping with schoolwork to enunciating values as the child grows, parents exert enormous influence over their children's development, success, and overall happiness. They are, however, not the only influences—especially after children enter school and begin interacting with the world at large. It's especially important that parents work to give children the best start possible, but it's also important for parents to recognize that kids come into the world with their own temperaments, personalities, and goals.

Learning to let go as a parent of a Primary 1 child SINGAPORE: It's only the third week of school and already I have mixed feelings about my child starting Primary 1. On the one hand, I feel a sense of pride as I witness my son growing in independence and developing new skills. On the other, I wish time would slow down so I can linger with my son a little more. Five Destructive Parenting Habits We Must Replace Now that my kids are grown adults, I feel more comfortable teaching both parents and faculty the art of leading young people into healthy maturity. Like many parents, my experience raising my first child enabled me to relax a bit on my second child. We tend to obsess at the tiniest quirk in our first baby, and by child number three, we’re not as stressed.

Many Singaporeans’ parenting style not helping children succeed - TODAYonline I was disturbed to read the report “MP proposes piloting cluster of schools without exams, streaming” (Jan 22). In the current debate on how best to restructure the education system, more people seem inclined to wash the outside of a dirty cup and call it clean, but leaving the inside filthy as ever. An examination-free education system would serve only to mask the inadequacies of the current generation of pupils, rather than help them to succeed. While some of the pressure they face is due to the existing system, my experience as an educator tells me that the root problem lies with the quality of young people now. Born into a world where advanced technology is at their fingertips, our children are accustomed to having everything quickly and with little effort.

Related:
Related:  4 Types of Parenting Styles and Their Effects on Children   -  What is your parenting style?   -  crystal_goh