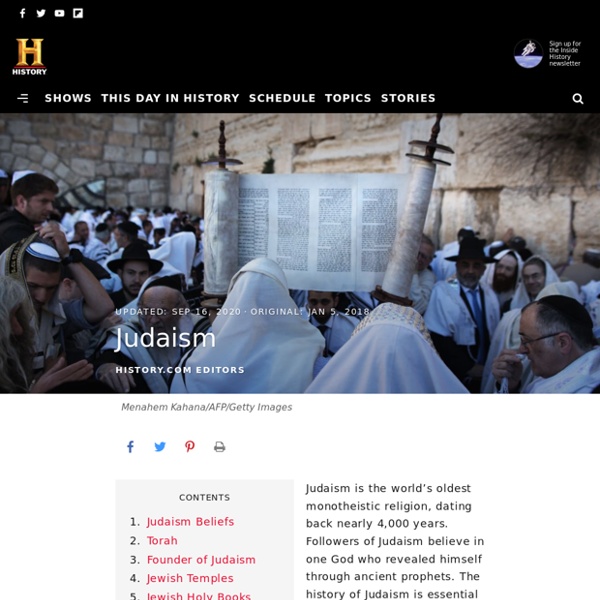 Judaism is the world’s oldest monotheistic religion, dating back nearly 4,000 years. Followers of Judaism believe in one God who revealed himself through ancient prophets. The history of Judaism is essential to understanding the Jewish faith, which has a rich heritage of law, culture and tradition. Judaism Beliefs Jewish people believe there’s only one God who has established a covenant—or special agreement—with them. Their God communicates to believers through prophets and rewards good deeds while also punishing evil. Most Jews (with the exception of a few groups) believe that their Messiah hasn’t yet come—but will one day. Jewish people worship in holy places known as synagogues, and their spiritual leaders are called rabbis. Today, there are about 14 million Jews worldwide. Torah The Jewish sacred text is called the Tanakh or the “Hebrew Bible.” The Torah—the first five books of the Tanakh—outlines laws for Jews to follow. Founder of Judaism Jewish Temples Jewish Holy Books Talmud Shabbat

Buddhism - Definition, Founder & Origins Buddhism is a faith that was founded by Siddhartha Gautama (“the Buddha”) more than 2,500 years ago in India. With about 470 million followers, scholars consider Buddhism one of the major world religions. Its practice has historically been most prominent in East and Southeast Asia, but its influence is growing in the West. Many Buddhist ideas and philosophies overlap with those of other faiths. Islam - Five Pillars, Nation of Islam & Definition Islam is the second largest religion in the world after Christianity, with about 1.8 billion Muslims worldwide. Although its roots go back further, scholars typically date the creation of Islam to the 7th century, making it the youngest of the major world religions. Islam started in Mecca, in modern-day Saudi Arabia, during the time of the prophet Muhammad’s life. Today, the faith is spreading rapidly throughout the world.

Hinduism - Origins, Facts & Beliefs Hinduism is the world’s oldest religion, according to many scholars, with roots and customs dating back more than 4,000 years. Today, with about 900 million followers, Hinduism is the third-largest religion behind Christianity and Islam. Roughly 95 percent of the world’s Hindus live in India. Because the religion has no specific founder, it’s difficult to trace its origins and history. Hinduism is unique in that it’s not a single religion but a compilation of many traditions and philosophies. Hinduism Beliefs Is Anti-Semitism the New Normal in America? Pessimism runs deep in the Jewish psyche, with, tragically, good cause. Anti-Semitism goes back to the very beginnings of Jews as a people. Since biblical days, Jews have been seen as “the other,” outsiders, victims of conspiracy theories and myths that have no rational source. The pages of Jewish history are bloodstained from countless persecutions and pogroms.

Christianity - Dogma, Definition & Beliefs Christianity is the most widely practiced religion in the world, with more than 2 billion followers. The Christian faith centers on beliefs regarding the birth, life, death and resurrection of Jesus Christ. While it started with a small group of adherents, many historians regard the spread and adoption of Christianity throughout the world as one of the most successful spiritual missions in human history. Christianity Beliefs Some basic Christian concepts include: Christians are monotheistic, i.e., they believe there’s only one God, and he created the heavens and the earth.

America's long and complex relationship with Hinduism Last week marked the death anniversary of Mahesh Yogi, the Indian guru who brought transcendental meditation to the West in the sixties and became a spiritual teacher to The Beatles, comedian Jerry Seinfeld, and countless other celebrities. Today, the legacy of the Maharashi, as he was popularly known, is evident in the widespread appreciation of meditation: Over 6 million people worldwide practice the technique the Maharishi introduced—transcendental meditation. An even larger number practice other forms. Health professionals and practitioners extol its many benefits, which range from anger management, lowered blood pressure and cardiovascular disease, reduced post-traumatic stress, and simply a healthier lifestyle.

Why do we have creation myths? The other week, the New Scientist published a lengthy report about an Amazonian tribe called the Piraha. They are, it is believed, unique: they have virtually no notion of time, little oral history, almost no art, and the simplest kinship system known. They are also believed to be the only society with no creation myth. But why are there not more like them?

10 Hollywood Female Stars You May Have Not Known Are Jewish Jews are often associated with Hollywood pioneers, manager and producers. But here is a list – not ranking – of some of Hollywood’s most glamorous and talented Jewish actresses: Zsa Zsa Gabor Zsa Zsa Gabor was a Hungarian-American actress and socialite.

Watch: How people respond to Bible quotes when told they're from the Quran People make a lot of assumptions about Islam compared with Christianity and Judaism — particularly that it's more inherently violent. But do people really know what they're talking about, or are they simplifying complicated belief systems to make a political point? The team at Dit Is Normaal decided to put this to the test in the Netherlands, where they're based. So they disguised a Bible as a Quran, read verses from the Bible (such as "You will have to cut off her hand"), and asked people for their thoughts. People by and large reacted with a lot of "othering" of Muslims — making remarks like, "If you've been raised with this book and these kinds of thoughts, it's going to influence the way you think." Then they found out the verses came from the Bible, not the Quran.

9 myths about Hinduism — debunked – CNN Belief Blog - CNN.com Blogs By Moni Basu, CNN [twitter-follow screen_name='MbasuCNN'] (CNN) - Caste. Cows. HuffPost is now a part of Verizon Media HuffPost is part of Verizon Media. We and our partners will store and/or access information on your device through the use of cookies and similar technologies, to display personalised ads and content, for ad and content measurement, audience insights and product development. Your personal data that may be used Information about your device and internet connection, including your IP address Browsing and search activity while using Verizon Media websites and apps Precise location Find out more about how we use your information in our Privacy Policy and Cookie Policy. To enable Verizon Media and our partners to process your personal data select 'I agree', or select 'Manage settings' for more information and to manage your choices.

Judaism: Basic Beliefs Judaism began about 4000 years ago with the Hebrew people in the Middle East. Abraham, a Hebrew man, is considered the father of the Jewish faith because he promoted the central idea of the Jewish faith: that there is one God. At the time many people in the Middle East worshipped many gods. The Most Important Deities in Hinduism For Hindus, there is a single, universal god known as the Supreme Being or Brahman. Hinduism also has numerous gods and goddesses, known as deva and devi, who represent one or more of Brahman's aspects. Foremost among the many Hindu gods and goddesses are the Holy Triad of Brahma, Vishnu, and Shiva, the creator, sustainer, and destroyer of worlds (in that order).

The Book of Genesis, part 1: God created Genesis 1 and 2 must be among the most hotly debated texts in the Bible. But our obsession with whether and how they can be reconciled with scientific descriptions of the beginning of the universe is distorting our understanding of where these "creation narratives" fit into the wider concerns of the Book of Genesis. In its printed form, Genesis has 50 chapters, only one and a bit of which directly concern the origins of the universe.