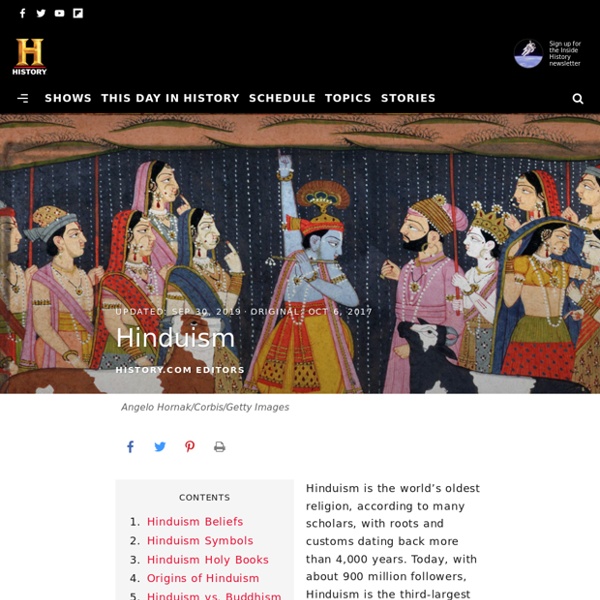 Hinduism is the world’s oldest religion, according to many scholars, with roots and customs dating back more than 4,000 years. Today, with about 900 million followers, Hinduism is the third-largest religion behind Christianity and Islam. Roughly 95 percent of the world’s Hindus live in India. Because the religion has no specific founder, it’s difficult to trace its origins and history. Hinduism is unique in that it’s not a single religion but a compilation of many traditions and philosophies. Hinduism Beliefs Some basic Hindu concepts include: Hinduism embraces many religious ideas. Hinduism Symbols There are two primary symbols associated with Hinduism, the om and the swastika. The om symbol is composed of three Sanskrit letters and represents three sounds (a, u and m), which when combined are considered a sacred sound. Hinduism Holy Books Hindus value many sacred writings as opposed to one holy book. The primary sacred texts, known as the Vedas, were composed around 1500 B.C. Hinduism vs.

America's long and complex relationship with Hinduism Last week marked the death anniversary of Mahesh Yogi, the Indian guru who brought transcendental meditation to the West in the sixties and became a spiritual teacher to The Beatles, comedian Jerry Seinfeld, and countless other celebrities. Today, the legacy of the Maharashi, as he was popularly known, is evident in the widespread appreciation of meditation: Over 6 million people worldwide practice the technique the Maharishi introduced—transcendental meditation. An even larger number practice other forms. Purpose of Life in Hinduism - UK Dharma Celebration Hinduism is the third largest religion of the world. The followers are known as Hindus and it holds 15-16% of the world population. Hinduism contains various philosophies associated with cosmology, shared concepts, pilgrimage to sacred sites and recognisable rituals. Even in Hinduism, the purpose of life is also beautifully described. In Hinduism, human life is not only about getting into this world but it is also about living a blissful life, enjoying the blessings, and leading towards the end, i.e., death.

Christianity - Dogma, Definition & Beliefs Christianity is the most widely practiced religion in the world, with more than 2 billion followers. The Christian faith centers on beliefs regarding the birth, life, death and resurrection of Jesus Christ. While it started with a small group of adherents, many historians regard the spread and adoption of Christianity throughout the world as one of the most successful spiritual missions in human history. Christianity Beliefs Some basic Christian concepts include: Buddhism - Definition, Founder & Origins Buddhism is a faith that was founded by Siddhartha Gautama (“the Buddha”) more than 2,500 years ago in India. With about 470 million followers, scholars consider Buddhism one of the major world religions. Its practice has historically been most prominent in East and Southeast Asia, but its influence is growing in the West.

9 myths about Hinduism — debunked – CNN Belief Blog - CNN.com Blogs By Moni Basu, CNN [twitter-follow screen_name='MbasuCNN'] (CNN) - Caste. Hinduism’s Impact on Today’s Society Hinduism, also known as “The Oldest Religion on Earth.” Hinduism has no single founder, nor one single set of guidelines to follow, making it an extremely adaptable religion. Hinduism could more so be considered a way-of-life as opposed to an actual religion. In fact, the terms “Hinduism” and “Hindu” are words deemed by the Western World. Not once are either of these words mentioned within the various sacred texts of Hinduism. Judaism: Founder, Beliefs & Facts Judaism is the world’s oldest monotheistic religion, dating back nearly 4,000 years. Followers of Judaism believe in one God who revealed himself through ancient prophets. The history of Judaism is essential to understanding the Jewish faith, which has a rich heritage of law, culture and tradition. Judaism Beliefs

Why do we have creation myths? The other week, the New Scientist published a lengthy report about an Amazonian tribe called the Piraha. They are, it is believed, unique: they have virtually no notion of time, little oral history, almost no art, and the simplest kinship system known. They are also believed to be the only society with no creation myth.

The Most Important Deities in Hinduism For Hindus, there is a single, universal god known as the Supreme Being or Brahman. Hinduism also has numerous gods and goddesses, known as deva and devi, who represent one or more of Brahman's aspects. Foremost among the many Hindu gods and goddesses are the Holy Triad of Brahma, Vishnu, and Shiva, the creator, sustainer, and destroyer of worlds (in that order). Sometimes, the three may appear in the form of an avatar, embodied by a Hindu god or goddess. But the most popular of these gods and goddesses are important deities in their own right. Ganesha 9 myths about Hinduism, debunked Suhag Shukla knows that's how some people outside Hinduism see her religion. As the co-founder of the Hindu American Foundation, Shukla clarifies misconceptions all the time. Hinduism is ancient, though there is no specific date for when it was formed. The name is a Sanskrit word; Hinduism and Hindu were coined by invaders who used the terms to refer to the people they encountered when they crossed the Hindu Kush mountains and arrived at the Indus River. In America, Hinduism's profile was elevated by Indian immigrants who brought their customs and rituals with them and perhaps most recently, by the growing popularity of Hindu teachings like yoga and meditation. Hinduism is the world's oldest living religion and the third largest -- behind Christianity and Islam -- with more than 1 billion followers.