What Is Operant Conditioning and How Does It Work? 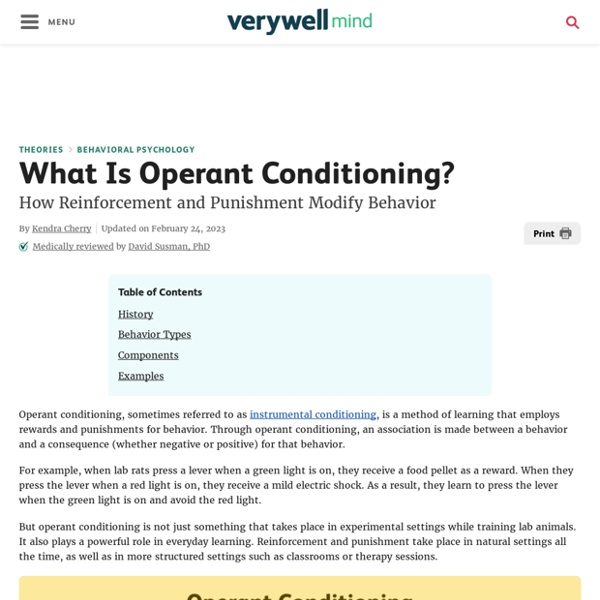 Operant conditioning, sometimes referred to as instrumental conditioning, is a method of learning that employs rewards and punishments for behavior. Through operant conditioning, an association is made between a behavior and a consequence (whether negative or positive) for that behavior.1 For example, when lab rats press a lever when a green light is on, they receive a food pellet as a reward. When they press the lever when a red light is on, they receive a mild electric shock. As a result, they learn to press the lever when the green light is on and avoid the red light. But operant conditioning is not just something that takes place in experimental settings while training lab animals. The History of Operant Conditioning Operant conditioning was first described by behaviorist B.F. Through the first part of the 20th century, behaviorism became a major force within psychology. Early behaviorists focused their interests on associative learning. Types of Behaviors Reinforcement Schedules

Road Safety Campaigns RoadSense Carnival On 6 July 2019, Traffic Police organised the RoadSense Carnival at the Ngee Ann City Civic Plaza. The inaugural RoadSense Carnival was graced by Mr Amrin Amin, Senior Parliamentary Secretary for Ministry of Home Affairs & Ministry of Health. The event’s theme was ‘Take the Road to Responsibility’, and this event was organised to educate road users in Singapore about the importance of graciousness to create a more pleasant road user experience for all Singaporeans. More than 3,600 people attended the event to learn about road safety through a line-up of fun and engaging games and activities.

Article 1: "Positive Reinforcement for Adolescents" By the time children have reached adolescence, their responses are often ingrained, but parental actions can still positively affect adolescent behavior. Since adolescents are struggling to develop their personal identity and are concerned about their body image, parental support is crucial to help positively frame experiences as learning opportunities. Positive reinforcement remains a powerful teaching tool during these formative years, and we encourage parents to take time to contemplate the ways they can help adolescents mature and become self-reliant. Reinforce mature decisions by allowing increased privileges when adolescent demonstrates increased responsibility. For instance, an adolescent who consistently demonstrates the ability to come home at the requested time might be allowed a later curfew - whereas an adolescent who has not completed requested chores will not be allowed to leave home that evening.Express pleasure at positive adolescent behavior.

Positive Reinforcement and Operant Conditioning In operant conditioning, positive reinforcement involves the addition of a reinforcing stimulus following a behavior that makes it more likely that the behavior will occur again in the future. When a favorable outcome, event, or reward occurs after an action, that particular response or behavior will be strengthened. One of the easiest ways to remember positive reinforcement is to think of it as something being added. Real-Life Examples of Positive Punishment “Positive” and “punishment” seem like two words that you wouldn’t use together. However, positive punishment will make complete sense once you learn the definition and explore some examples of positive punishment. Review how positive punishment is different from negative punishment and which is more effective. Understanding Positive Punishment

Traffic police rewards motorists for acts of courtesy The Traffic Police is looking out for motorists who display courtesy on the road. But instead of handing out summons, motorists who have shown kind acts, such as giving way to other road users, are rewarded with $40 worth of petrol vouchers and a road safety mascot soft toy. That was what happened to Mr. Lim Kan Seng when he was spotted giving way to another motorist along New Upper Changi Road yesterday morning. The 50-year old hawker also received a commendation certificate, in addition to the road safety mascot toy and vouchers. Negative Reinforcement and Operant Conditioning Negative reinforcement is a term described by B. F. Skinner in his theory of operant conditioning. In negative reinforcement, a response or behavior is strengthened by stopping, removing, or avoiding a negative outcome or aversive stimulus.1

Article 2: ''Parenting A Teen Through Positive Reinforcement - Back On Track" Most parents can agree: the teenage years can be rough! Hormones are raging, they are trying to gain more independence, and they spend a lot of time away from their parents and their home while hanging with friends. One minute they love and adore you, the next minute you ruined their life. Positive Punishment and Operant Conditioning Positive punishment is a concept used in B.F. Skinner's theory of operant conditioning. How exactly does the positive punishment process work?

Negative Punishment Examples and Scenarios Nobody ever wants their stuff taken away. That is the main concept behind negative punishment. Using negative punishment example scenarios, gain an understanding of the concept and its effectiveness. Then, go on to explore the difference between positive and negative punishment. Harsher penalties for driving offences including longer jail terms and heavier fines, Singapore News SINGAPORE - Irresponsible and reckless motorists may face longer jail terms and have their vehicles seized under proposed changes to the Road Traffic Act (RTA). Announcing this on Thursday (Feb 21), Ms Sun Xueling, Senior Parliamentary Secretary for Home Affairs (MHA) and National Development, said: “We want to increase the penalties for motorists who drive irresponsibly and cause serious accidents. “This will deter them and ensure that they receive sentences that are commensurate with the harm they caused.” With the changes, dangerous driving and careless driving under the RTA will correspond broadly to offences of rash act and negligent act under the Penal Code.