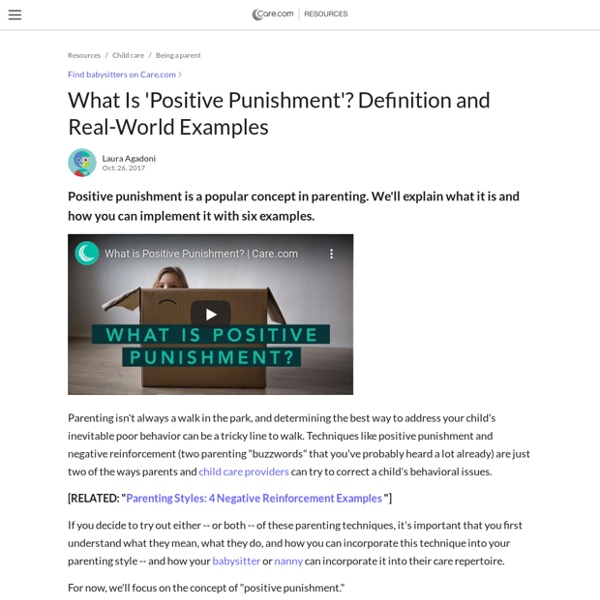 Positive punishment is a popular concept in parenting. We'll explain what it is and how you can implement it with six examples. Parenting isn't always a walk in the park, and determining the best way to address your child's inevitable poor behavior can be a tricky line to walk. Techniques like positive punishment and negative reinforcement (two parenting "buzzwords" that you've probably heard a lot already) are just two of the ways parents and child care providers can try to correct a child's behavioral issues. [RELATED: "Parenting Styles: 4 Negative Reinforcement Examples "] If you decide to try out either -- or both -- of these parenting techniques, it's important that you first understand what they mean, what they do, and how you can incorporate this technique into your parenting style -- and how your babysitter or nanny can incorporate it into their care repertoire. For now, we'll focus on the concept of "positive punishment." What Is "Punishment"? What Is "Positive Punishment"?

Punishments vs. Consequences: Teach Your Teen the Difference When I work with parents of teenagers, our conversations inevitably turn toward discipline. “How do get my teen to follow the rules?” “My teen won’t clean up after himself. What should I do?” “Nothing I do seems to have any effect on her!” How to Properly Use Reinforcement and Punishment - North Shore Pediatric Therapy Reinforcement and punishment are common terms that most people have heard of and use on a daily basis, whether they realize it or not. Although the concepts seem easy to understand and implement, it can be easy to confuse the basic principles and/or implement them incorrectly. In order to understand the difference between reinforcement and punishment, it is important to understand the definitions of both terms. Reinforcement Reinforcement is a consequence following a behavior that increases the probability that the behavior will increase in the future. The consequence can be either positive or negative.

Article 1: "The Study of Punishment in Psychology" Punishment is a term used in operant conditioning to refer to any change that occurs after a behavior that reduces the likelihood that that behavior will occur again in the future. While positive and negative reinforcements are used to increase behaviors, punishment is focused on reducing or eliminating unwanted behaviors. Punishment is often mistakenly confused with negative reinforcement. The difference: Reinforcement increases the chances that a behavior will occur and punishment decreases the chances that a behavior will occur. Teens May Learn Best with Positive Reinforcement A new study finds that adolescents focus on rewards and are less able to learn to avoid punishment or consider the consequences of alternative actions. University College-London investigators compared how adolescents and adults learn to make choices based on the available information. Investigators tracked the way in which 18 volunteers aged 12-17 and 20 volunteers aged 18-32 completed tasks in which they had to choose between abstract symbols. Each symbol was consistently associated with a fixed chance of a reward, punishment, or no outcome. As the trial progressed, participants learned which symbols were likely to lead to each outcome and adjusted their choices accordingly.

How Negative Punishment Works Negative punishment is an important concept in B. F. Skinner's theory of operant conditioning. In behavioral psychology, the goal of punishment is to decrease unwanted behavior. Reinforcement vs. Punishment: Changing BehaviorBehavioral Health Works Being a parent has been known as the best thing ever BUT also the most challenging endeavor you will encounter in your lifetime. Parents strive to raise a healthy and happy child that will one day grow up as a full-fledged mature and independent adult. But to successfully accomplish this goal, a parent must set forth structure or rules throughout their childhood to help them understand and be realigned when their behavior needs to be modified. When a parent recognizes the need to change a behavior, they will likely end up using either reinforcement, punishment, or a mixture of both. When we’re helping to decrease the frequency of a child’s negative behavior, having the reinforcement or punishment methods in our toolkit can help you modify and implement the desired behavior.

Article 1: "What is Negative Punishment (Examples and Effectiveness)" In this article, we will review negative punishment, its definition, examples, and drawbacks. American psychologist B.F. Skinner developed the theory of operant conditioning, which stated that a person or animal’s behavior could be increased or decreased by adding or removing appropriate stimuli after the behavior is exhibited. The difference between classical conditioning and operant conditioning is that classical affects unconscious behavior, while operant affects conscious behavior. Within operant, punishment aims to reduce a behavior while reinforcement increase a behavior. Punishment or reinforcement can be positive or negative.

Parenting Teens: When It Comes To Learning, Positive Reinforcement Trumps Punishment Teens generally aren’t afraid to defy authority. Generations of parents know this, having tried different strategies for getting their adolescents to do what they ask — often in attempts to keep them safe and help pave a path toward success. Now, a new study shows that rewards, rather than punishments, could be the way to get them to cooperate. Researchers at the University College London asked 18 volunteers aged 12 to 17 and 20 volunteers aged 18 to 32 to complete both a learning task and post-learning task in which they chose between abstract symbols, each associated with a fixed chance of reward, punishment, or no outcome.

Positive punishment can be used as a parenting technique to decrease the likelihood of bad behavior in teenagers by introducing an undesirable consequence after an undesirable behavior. For example, a teenage child can be grounded by his or her parent at home for spending excessive time outside home. by jonquah Sep 25