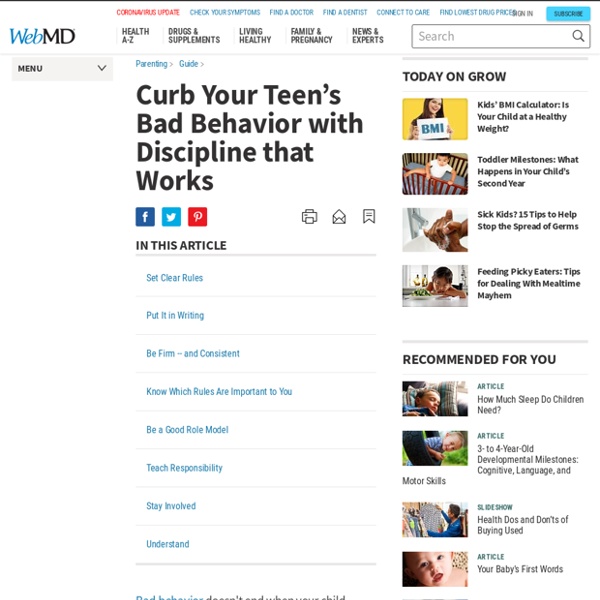 Bad behavior doesn't end when your child graduates from diapers -- or even from middle school. In fact, the teen years can bring some of the toughest discipline challenges parents have to face. Sulking, arguing, lying, and rebelling are just a few of the ways teens misbehave. There's a good explanation for these bad behaviors. As teens become more independent, they still lack the emotional maturity they need to make informed, thoughtful decisions. The parts of the brain that control decision making and impulse control haven't fully developed. You want your children to do the right things, but disciplining teens isn't easy. The goal of discipline is to gain more control over your kids -- without being too controlling. Set Clear Rules Tweens and teens push boundaries to see how their parents will respond. You'll get less resistance if you involve your kids in designing their own consequences. Put It in Writing Continued Be Firm -- and Consistent Teens are master negotiators and manipulators.

Artcle 2: "Is This Typical Teenage Behavior or a Warning Sign of Mental Illness?" Some rebellious, irritable, or anxious behavior is a normal and healthy part of being a teenager. However, when shifts in a teenager’s personality are more extreme, they may be indicators of a mental health issue. Concerning behaviors can sometimes be prevented when parents talk to teens frequently and have an open dialogue with them that’s supportive.Experts say even if parents aren’t sure whether or not a change in their teen’s behavior is something they should be worried about, it doesn’t hurt to check with a therapist, their child’s pediatrician, or a school counselor. Any parent of a teenager knows, teens can be moody, distant, and defiant at times. But while this can sometimes be a source of stress and conflict for families, it’s also usually a completely normal part of being a teen.

Child Discipline: Physical Punishment Can Leave Psychological Marks Physical punishment on children may have adverse effects that may follow them into adulthood. The Psychosocial Trauma Support Service at KK Women's and Children's Hospital (KKH) explains these effects. The psychological impacts of physical punishment A study published in the journal Pediatrics suggests that children subjected to such punishments risk having mental health problems as adults. According to the Canadian researchers, these can show up as mood and anxiety disorders or substance abuse. They analysed data from thousands of American adults in one of the first studies to look at the long-term effects of physical punishment on children, even if the punishment was not major maltreatment or physical abuse. Reinforcement and Punishment Learning Objectives Explain the difference between reinforcement and punishment (including positive and negative reinforcement and positive and negative punishment)Define shapingDifferentiate between primary and secondary reinforcers In discussing operant conditioning, we use several everyday words—positive, negative, reinforcement, and punishment—in a specialized manner. In operant conditioning, positive and negative do not mean good and bad. Instead, positive means you are adding something, and negative means you are taking something away. Reinforcement means you are increasing a behavior, and punishment means you are decreasing a behavior.

Teens May Learn Best with Positive Reinforcement A new study finds that adolescents focus on rewards and are less able to learn to avoid punishment or consider the consequences of alternative actions. University College-London investigators compared how adolescents and adults learn to make choices based on the available information. Investigators tracked the way in which 18 volunteers aged 12-17 and 20 volunteers aged 18-32 completed tasks in which they had to choose between abstract symbols. Each symbol was consistently associated with a fixed chance of a reward, punishment, or no outcome. As the trial progressed, participants learned which symbols were likely to lead to each outcome and adjusted their choices accordingly.

Reinforcement and Punishment in Psychology 101 at AllPsych Online Reinforcement The term reinforce means to strengthen, and is used in psychology to refer to anything stimulus which strengthens or increases the probability of a specific response. For example, if you want your dog to sit on command, you may give him a treat every time he sits for you.

Article 3: "10 Normal Teenage Behavior Problems And How To Handle Them" Understanding Teenage Behavior Problems Dealing with a teenager is not easy. No matter how good a parent you are, and how great your relationship with your children is, you are likely to face parenting roadblocks when it comes to your teenager. Behavior problems are common in teenagers. But you can deal with them with ease if you are willing to put in the effort to understand what they are going through and what it is that they need from you.

6 Positive Reinforcement Examples To Try With Your Kids ... Positive reinforcement — using praise or rewards to shape your child's behavior — means "focusing on the 'good' things your children are doing or certain behaviors that you like and that you want to see more of," explains Melanie Rudnick, a New York City-based parenting expert and conscious parenting coach. As these positive reinforcement examples will show, and as Dr. Nadja Reilly, a clinical psychologist and the associate director of the Freedman Center for Child and Family Development, explains, it can also be a great tool for communicating to your child the actions or values that you feel are important. Here are some easy examples of how you can use positive reinforcement at home to shape your child's behavior.

Create an Effective Reward System for Kids of All Ages While rewarding your child may be the last thing on your mind when you're dealing with misbehavior, reward systems can be one of the best ways to change a child's behavior. And the best news is, reward systems usually work fast. Reward systems also work for children of all ages. So, whether your preschooler has gotten into the habit of hitting, or your teenager keeps forgetting to do their chores, a simple reward system can help them become more responsible for their behavior. Little Kids Toddlers and preschoolers benefit from simple sticker charts.1 Allow your child to decorate a piece of paper and use that as your chart.

Positive Reinforcement in Teenagers Teenagers might need special incentives to learn skills, develop responsibility and make positive decisions about their conduct. One effective way to encourage the behaviors you want is to use the behavior management technique of positive reinforcement. Through positive reinforcement, you gradually make it more likely that your teenager will demonstrate the desired behaviors. Article 5: "13 Positive And Negative Influences Of Media On Teenagers" Image: Shutterstock “Whoever controls the media, controls the mind,” said famous singer and songwriter Jim Morrison. Media plays an important role in shaping the ideas and beliefs of teens.