The Nine Planets of The Solar System 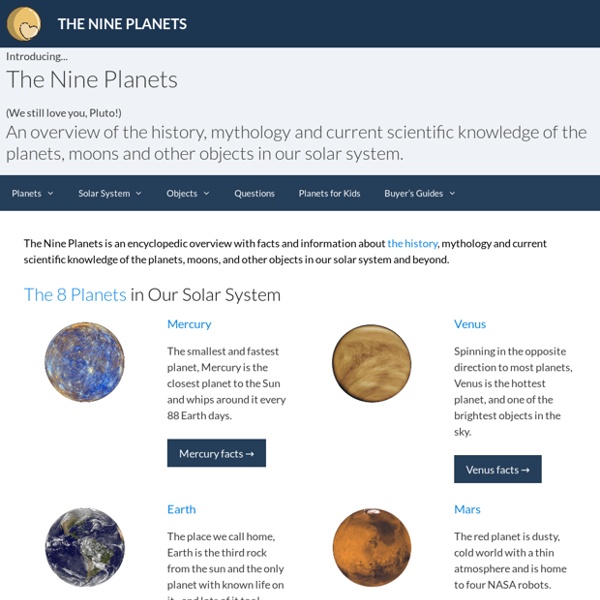 Planets – NASA There are more planets than stars in our galaxy. The current count orbiting our star: eight. The inner, rocky planets are Mercury, Venus, Earth and Mars. The outer planets are gas giants Jupiter and Saturn and ice giants Uranus and Neptune.

Planet The planets were thought by Ptolemy to orbit Earth in deferent and epicycle motions. Although the idea that the planets orbited the Sun had been suggested many times, it was not until the 17th century that this view was supported by evidence from the first telescopic astronomical observations, performed by Galileo Galilei. By careful analysis of the observation data, Johannes Kepler found the planets' orbits were not circular but elliptical. As observational tools improved, astronomers saw that, like Earth, the planets rotated around tilted axes, and some shared such features as ice caps and seasons.

The Solar System Our solar neighborhood is an exciting place. The Solar System is full of planets, moons, asteroids, comets, minor planets, and many other exciting objects. Learn about Io, the explosive moon that orbits the planet Jupiter, or explore the gigantic canyons and deserts on Mars. : Planets Planets: The planet count in our solar system has gone as high as 15 before new discoveries prompted a fine tuning of the definition of a planet. The most recent change was in 2006 when scientists reclassified Pluto as a new kind of object - a dwarf planet. Dwarf Planets: This new class of worlds helps us categorize objects that orbit the Sun but aren't quite the same as the rocky planets and gas giants in our solar system.