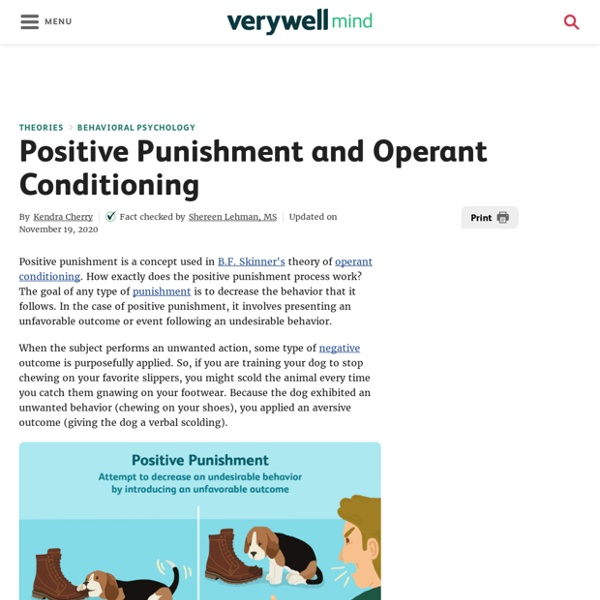 Negative Punishment Punishment is an important concept used in the theory of Operant conditioning, whose main goal is to decrease the rate of certain undesired behavior from occurring again. There are two kinds of punishment This article will cover various aspects of Negative punishment. Negative punishment is the part of punishment, which also focuses on decreasing the rate of any specific undesired behavior from an individual. The concept works by removing a certain favorite or desired item from the individual’s life.

Parenting Teens: When It Comes To Learning, Positive Reinforcement Trumps Punishment Teens generally aren’t afraid to defy authority. Generations of parents know this, having tried different strategies for getting their adolescents to do what they ask — often in attempts to keep them safe and help pave a path toward success. Now, a new study shows that rewards, rather than punishments, could be the way to get them to cooperate. Researchers at the University College London asked 18 volunteers aged 12 to 17 and 20 volunteers aged 18 to 32 to complete both a learning task and post-learning task in which they chose between abstract symbols, each associated with a fixed chance of reward, punishment, or no outcome. As the trial progressed, participants learned which symbols were likely to lead to each result and adjusted their choices accordingly. Adults and teens alike proved equally capable of learning to be motivated by rewards, but the adults learned to avoid symbols associated with punishment while the adolescents did not.

Discipline for Teens: Strategies and Challenges When your child becomes a teenager, your parenting role is likely to shift. You may find yourself becoming more of a guide, rather than an enforcer. That’s not to say your child won’t need you to intervene when there are safety issues or that your teen won’t need consequences. But, by now, it’s OK to let your child make some choices on their own, even when you think it’s a bad choice. Positive Reinforcement and Operant Conditioning In operant conditioning, positive reinforcement involves the addition of a reinforcing stimulus following a behavior that makes it more likely that the behavior will occur again in the future. When a favorable outcome, event, or reward occurs after an action, that particular response or behavior will be strengthened. One of the easiest ways to remember positive reinforcement is to think of it as something being added. By thinking of it in these terms, you may find it easier to identify real-world examples of positive reinforcement. Sometimes positive reinforcement occurs quite naturally.

Positive Punishment in Operant Conditioning [Definition & Examples] Positive punishment is often used in life when we want to suppress unwanted behavior. Let’s examine its definition, usage and examples, especially when it comes to parenting. What is Positive Punishment Positive punishment is a type of operant conditioning, a theory proposed by psychologist B.F Skinner. Its main purpose is to reduce the likelihood of an undesired behavior repeating in the future by applying an aversive stimulus after the behavior occurs. Punishments vs. Consequences: Teach Your Teen the Difference When I work with parents of teenagers, our conversations inevitably turn toward discipline. “How do get my teen to follow the rules?” “My teen won’t clean up after himself.

This is a summary of positive punishment and examples of how they can applied to real life situations. by callistael Mar 28