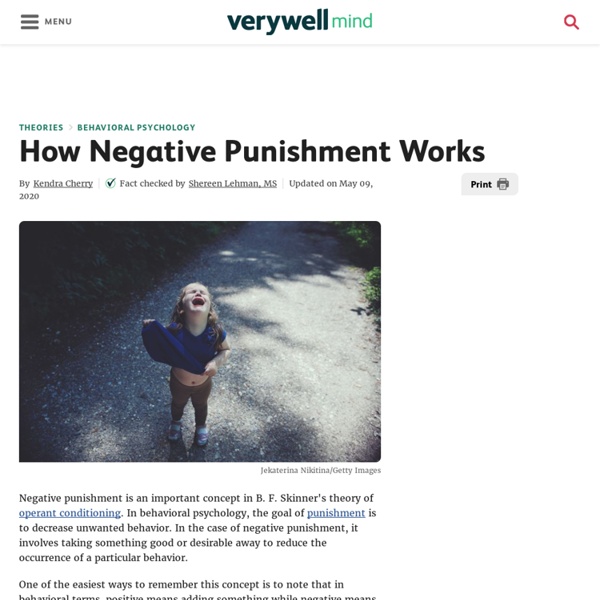 Negative punishment is an important concept in B. F. Skinner's theory of operant conditioning. In behavioral psychology, the goal of punishment is to decrease unwanted behavior. In the case of negative punishment, it involves taking something good or desirable away to reduce the occurrence of a particular behavior. One of the easiest ways to remember this concept is to note that in behavioral terms, positive means adding something while negative means taking something away. Examples of Negative Punishment Can you identify examples of negative punishment? After two children get into a fight over who gets to play with a new toy, the mother simply takes the toy away from both children.A teenage girl stays out for an hour past her curfew, so her parents ground her for a week.A third-grade boy yells at another student during class, so his teacher takes away his "good behavior" tokens that can be redeemed for prizes. The Effects of Negative Punishment Negative punishment is most effective when:

In a Nutshell Positive punishment is a popular concept in parenting. We'll explain what it is and how you can implement it with six examples. Parenting isn't always a walk in the park, and determining the best way to address your child's inevitable poor behavior can be a tricky line to walk. Discipline for Teens: Strategies and Challenges When your child becomes a teenager, your parenting role is likely to shift. You may find yourself becoming more of a guide, rather than an enforcer. That’s not to say your child won’t need you to intervene when there are safety issues or that your teen won’t need consequences.

What Is 'negative Punishment'? Definition And Real-World Examples Negative punishment is a popular concept in parenting. We'll explain what it is and how you can implement it with eight real examples. Your child is acting out, and it seems like nothing you say or do will curb their exasperating behavior. Sound familiar? Positive vs Negative Punishment - Psychestudy Punishment is a fundamental concept of Operant Conditioning, whose major objective is to decrease the rate of certain undesired behavior from occurring again. Punishment can be further classified into two major parts These two different types of punishment have got both similarities and differences, as the major purpose of both these punishment types is to decrease the rate of certain undesired behavior.

Reinforcement vs. Punishment: Changing Behavior Being a parent has been known as the best thing ever BUT also the most challenging endeavor you will encounter in your lifetime. Parents strive to raise a healthy and happy child that will one day grow up as a full-fledged mature and independent adult. But to successfully accomplish this goal, a parent must set forth structure or rules throughout their childhood to help them understand and be realigned when their behavior needs to be modified. Punishments vs. Consequences: Teach Your Teen the Difference When I work with parents of teenagers, our conversations inevitably turn toward discipline. “How do get my teen to follow the rules?” “My teen won’t clean up after himself. What should I do?” “Nothing I do seems to have any effect on her!” Discipline with teenagers is complicated.

Positive Punishment and Operant Conditioning Positive punishment is a concept used in B.F. Skinner's theory of operant conditioning. How exactly does the positive punishment process work? The goal of any type of punishment is to decrease the behavior that it follows. How to Use Positive Reinforcement to Improve Your Child's Behavior When your child misbehaves, rewards might be the last thing on your mind. But, positive reinforcement can be one of the most effective behavior modification techniques.1 You can use positive reinforcement to encourage prosocial behaviors, like sharing or following directions. And, you can use it to prevent misbehavior, like hitting and rule violations. Positive reinforcement can also be an effective way to encourage and motivate your child to be responsible, do their chores, get along with their siblings, or complete their homework assignments without arguing.

Effects of Positive Punishment Techniques If you have ever done potty training for a toddler, behavior training for a dog, or even had cheat meals while dieting, you have engaged in a technique called operant conditioning. It involves learning and altering certain behaviors by utilizing reinforcement and punishment. If you are teaching a dog to not pull on the leash while walking, you might reinforce good behavior where you give them a treat when they do not pull. If you are teaching a toddler not throw temper tantrums when they do not get their way, you might put them in timeout when they act out.

Examples of Positive Reinforcement Teenagers are young adults who are trying to learn the ways of the world. When they do something great at school or at home or simply make a healthy decision, parents can give them a reward. The reward does not have to be money, but it is a nice way to say "thank you" or "I'm proud of you." Teens need this positive reinforcement because it shows them that they are on the right track.1 It is also a good life lesson that you can pass on: good things happen to good people. When Do Teenagers Deserve a Reward? A teen can earn a reward for positive behavior or by changing negative behavior.1 While you should not feel that you have to "pay" for every good thing your teen does, reinforcement of good behavior will help ensure that it continues.

This is a summary of negative punishment and examples of how they can applied to real life situations. by callistael Mar 28