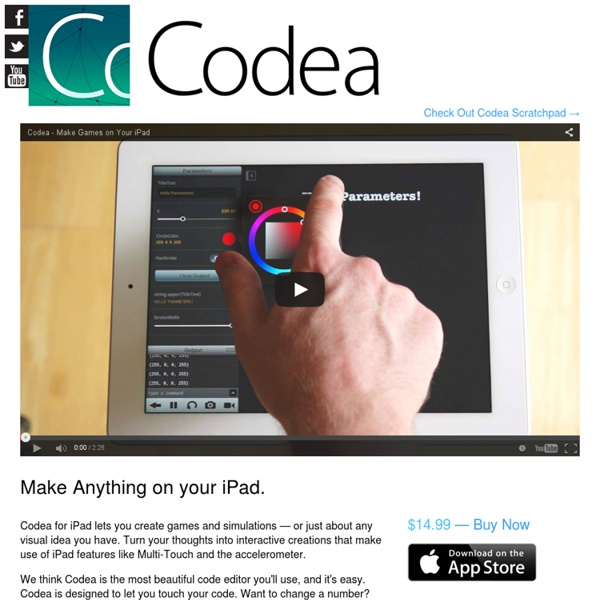 Make Anything on your iPad. Codea for iPad lets you create games and simulations — or just about any visual idea you have. Turn your thoughts into interactive creations that make use of iPad features like Multi-Touch and the accelerometer. We think Codea is the most beautiful code editor you'll use, and it's easy. Codea is designed to let you touch your code. Want to change a number? Codea is built on the Lua programming language. Join the Codea Forums.

Cargo-Bot – iPad The first game programmed entirely on iPad® Be Logical. Play Cargo-Bot Presenting Cargo-Bot. Zuckerberg and Gates join the learn-to-code movement Hey, kids: coding is cool -- so cool that everyone from Facebook Chief Executive Mark Zuckerberg to NBA baller Chris Bosh wants you to do it. The celebrities are using their star power to draw attention to Code.org, a nascent nonprofit foundation that seeks to cultivate computer programming education in schools and direct people to online coding tools. Zuckerberg and Bosh join hip-hop artist Will.i.am, Microsoft legend Bill Gates, Twitter creator Jack Dorsey, and others in a new YouTube video designed to get students, and their teachers by association, excited about coding. The video is directed by Lesley Chilcott, a filmmaker who also produced acclaimed documentaries such as "An Inconvenient Truth" and "Waiting for Superman." The recurring theme of the video is that you don't have to be a genius to code -- and that if you learn to code, you'll be a hero like Bosh or get to eat free food at Facebook.

Kids must code on iPads An important 21st Century skill This post is about a topic and app close to my heart. Computer programming is the engine of modern life and dream maker for tens of thousands. More and more countries are introducing the subject as compulsory schooling at surprisingly young ages. The UK is introducing a national school programme in september this year whilst also funding yearofcode.org to increase momentum. Code.org is pushing an international message with big-name endorsement.

Webmaker - Tutoriel pour créer une application web Webmaker is partnering with Code.org on their global Hour of Code campaign and it's the perfect time to step up your web literacy skills. Whether in a classroom, afterschool program, or at home with some friends, you can learn a lot in one hour. Try some of our fun projects to learn more about HTML, CSS, Javascript and app development, and let's make the web, together. Kodu Kodu is a new visual programming language made specifically for creating games. It is designed to be accessible for children and enjoyable for anyone. The programming environment runs on the Xbox, allowing rapid design iteration using only a game controller for input. Programming as a Creative Medium The core of the Kodu project is the programming user interface. The language is simple and entirely icon-based.

Calculating a College Degree's True Value How much is a college diploma actually worth? The perennial question asked by every former English, philosophy, and art history major now has an answer in some states. For University of Virginia students, it pays to major in engineering—$60,300, on average, 18 months after graduation—rather than sociology ($33,154), or worse, biology ($27,209). Sculptris Focus as an artist on pure creativity Enter Sculptris, a fun and engaging way to start off your digital sculpting journey! If you're new to the world of digital sculpting, Sculptris is the ideal ground on which to get started. If on the other hand you're experienced in CG, we offer you ZBrush.