How feelings took over the world 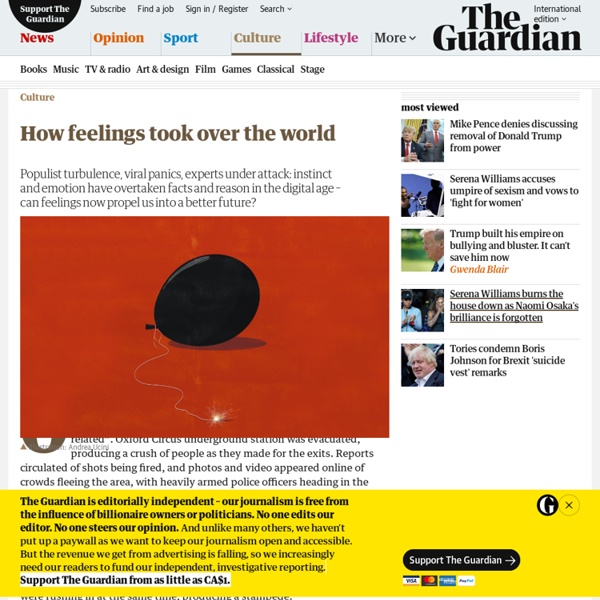 On a late Friday afternoon in November last year, police were called to London’s Oxford Circus for reasons described as “terror-related”. Oxford Circus underground station was evacuated, producing a crush of people as they made for the exits. Reports circulated of shots being fired, and photos and video appeared online of crowds fleeing the area, with heavily armed police officers heading in the opposite direction. Amid the panic, it was unclear where exactly the threat was emanating from, or whether there might be a number of attacks going on simultaneously, as had occurred in Paris two years earlier. Armed police stormed Selfridges department store, while shoppers were instructed to evacuate the building. Inside the shop at the time was the pop star Olly Murs, who tweeted to nearly 8 million followers: “Fuck everyone get out of Selfridge now gun shots!!” Smartphones and social media meant that this whole event was recorded, shared and discussed in real time.

The demise of the nation state What is happening to national politics? Every day in the US, events further exceed the imaginations of absurdist novelists and comedians; politics in the UK still shows few signs of recovery after the “national nervous breakdown” of Brexit. France “narrowly escaped a heart attack” in last year’s elections, but the country’s leading daily feels this has done little to alter the “accelerated decomposition” of the political system. In neighbouring Spain, El País goes so far as to say that “the rule of law, the democratic system and even the market economy are in doubt”; in Italy, “the collapse of the establishment” in the March elections has even brought talk of a “barbarian arrival”, as if Rome were falling once again.

Social Exchange Theory Explanations > Theories > Social Exchange Theory Description | Research | Example | So What? | See also | References Description All relationships have give and take, although the balance of this exchange is not always equal. Social Exchange theory explains how we feel about a relationship with another person as depending on our perceptions of: Skim reading is the new normal. The effect on society is profound Look around on your next plane trip. The iPad is the new pacifier for babies and toddlers. Younger school-aged children read stories on smartphones; older boys don’t read at all, but hunch over video games. Co-living's a Growing Trend - Not just among Millennials A 21st-century version of dormitory living for adults is emerging as a way for city dwellers to deal with expensive real estate, social isolation and environmental pressures. It's billed as co-living – the residential equivalent to co-working spaces – though there are parallels to older concepts such as boarding houses or university accommodation. In the past six months co-living spaces have opened up in Stanmore and Newtown, with Paddington coming within weeks, and Glebe and Randwick slated for 2020. Rebecca Dracup, an environmental engineer at Stantec-owned Wood and Grieve Engineers, said co-living was a growing trend around the world. READ MORE: * How to make multi-generational living work for you * Two couples' new build designed for multigenerational living * Our changing homes show we're craving more connection * The benefits of multigenerational living * Extended family households growing but can Kiwi homes cope?

Charles Duhigg: Why Is America So Angry? I. An Angry Little Town Soon after the snows of 1977 began to thaw, the residents of Greenfield, Massachusetts, received a strange questionnaire in the mail. “Try to recall the number of times you became annoyed and/or angry during the past week,” the survey instructed. Study: Racial resentment influences appraisals of President Obama's economic performance New research published in the journal Electoral Studies indicates that racial beliefs can lead some Americans to minimize President Barack Obama’s economic accomplishments. “What interested us most was the idea that people construct their own racial reality and they will align their beliefs to fit within this reality. People tend to minimize or ignore information that is inconsistent with their existing racial beliefs,” said study author Darren W.

The Assault on Empathy One morning this past November, with my daughter about to visit and holiday gifts on my mind, I opened my MIT mail and found an intriguing “call for subjects.” It described a research project that promised to use conversation with sociable robots, some of them designed to be children’s playthings (and indeed, marketed as holiday gifts), as a step towards “eliciting empathy.” There it was in black and white, the thing that has been unfolding for decades: The robot presented as empathy machine—an object that presents itself as worthy of your empathic response, and as having an empathic reaction to you. But objects can’t do this.

'BlacKkKlansman' Shows How White Supremacists Make Language Into a Weapon The opening scenes of Spike Lee’s new movie, BlacKkKlansman, are in black and white. The movie is a period piece based on the true story of a black man, Ron Stallworth (played in the film by John David Washington), who became the Colorado Springs Police Department’s first black officer in 1972 and then successfully infiltrated the city’s local Ku Klux Klan chapter in an elaborate sting operation. But this black and white imagery is an effect Lee is using to create the illusion of film from an even earlier era. A conspicuously squarely-dressed man named Dr. How We Grieve: Meghan O’Rourke on the Messiness of Mourning and Learning to Live with Loss John Updike wrote in his memoir, “Each day, we wake slightly altered, and the person we were yesterday is dead. So why, one could say, be afraid of death, when death comes all the time?” And yet even if we were to somehow make peace with our own mortality, a primal and soul-shattering fear rips through whenever we think about losing those we love most dearly — a fear that metastasizes into all-consuming grief when loss does come. In The Long Goodbye (public library), her magnificent memoir of grieving her mother’s death, Meghan O’Rourke crafts a masterwork of remembrance and reflection woven of extraordinary emotional intelligence.